The sea water temperature record of the DMR Boothbay Harbor (BBH) Environmental Monitoring Program, extending over more than a century, constitutes one of the longest running, continuous series of sea temperature observations for any point on the North American Atlantic Coast. Observations began in March 1905 and have continued, with minimal interruption, to the present day. Please see Station History below for a more detailed description of temperature measurement protocols over time.

Other Observations and Statistics Reported 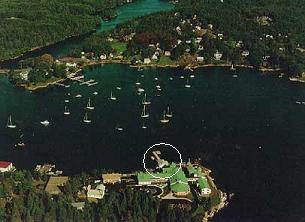 The DMR Boothbay Harbor Environmental Monitoring Program is operated by the Maine Department of Marine Resources with the goal of maintaining a continuous source of high-quality physical environmental data for the Maine coast. The station is located at the Department's Fisheries Laboratory in West Boothbay Harbor, Maine (43¯50'40" N, 69¯38'30" W). All of the station's sensors are deployed at or near the laboratory pier in a sheltered cove on the west side of Boothbay Harbor. The main harbor is very sheltered, and the cove is more so. Wave heights during a severe storm may reach three or four feet in the main harbor but rarely reach even two feet in the cove. This area experiences heavy commercial and recreational boat traffic during the summer months. Mean tide range has been calculated by the National Ocean Service at 8.8 feet and the spring tide range is given as 10.1 feet. While the harbor typically remains open throughout the year, the cove often develops a thin layer of ice which would extend from shore to shore if it weren't broken up by the passage of various small vessels. Freshwater influences within the harbor consist of a few small streams which provide drainage for the immediate area. Two larger rivers, the Sheepscot to the southwest and the Damariscotta to the northeast, are nearby. 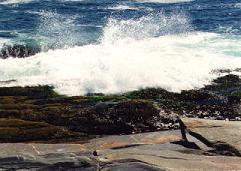 The sea water temperature sensor is located at -5.5 feet MLW (relative to mean low water). Air temperature and relative humidity sensors are mounted on the dock in a down-looking radiation shield. Wind speed/direction sensors are tower mounted on the dock approximately 30 feet above sea level. However, both the eastern and western horizons are obscured slightly by the Boothbay Harbor Laboratory and trees.

In 1905, the U.S. Bureau of Commercial Fisheries began the Environmental Monitoring Program at the fish hatchery in Boothbay Harbor. Air and sea water temperatures were recorded three times daily from 1905 until 1949, when instruments were installed, and data were recorded continuously on strip charts. Environmental observations were expanded in the 1960's to include other physical oceanographic and meteorological variables in addition to temperature. In 1973, the program was transferred to the Maine Department of Marine Resources and computerized data collection, processing, and storage began in 1986.

When analyzing this long-running time series, the methods of sea water temperature collection should be recognized and accounted for when using these data in oceanographic or biological analyses. See Drinkwater and Petri (2011) for a detailed history of temperature collection at this station (1905-2010) and the associated caveats with each data collection approach. The Maine Climate Council Science and Technical Subcommittee also used this temperature time series in the analyses that supported the 2020 "Scientific Assessment of Climate Change and Its Effects in Maine" report. These analyses and comparisons to other Gulf of Maine temperature records begin on page 61 of this report.

Sensors for air temperature, sea surface and bottom temperature, relative humidity, and tide height as well as datalogger hardware and software were installed in 1996. The system was upgraded again in the summer of 2012 to incorporate the use of a Campbell Data Logger and sensors. With support from the Maine Outdoor Heritage fund, DMR further expanded the capacity of the station in 2020 by adding partial pressure of carbon dioxide, pH, and dissolved oxygen sensors. In 2022, DMR shifted from collecting and storing station data from daily to hourly intervals.