Mitigating adverse impacts to aquatic resources is an integral part of the Clean Water Act and the Rivers and Harbors Act. The Endangered Species Act and other federal statutes provide for mitigation for actions affecting endangered and threatened or at-risk species such as Atlantic salmon. Mitigation is a sequential process of avoiding adverse impacts to resources, minimizing impacts that cannot practicably be avoided, and then compensating for those impacts that cannot be further minimized. Governmental agencies administering resource protection regulations may require appropriate and practicable compensatory mitigation as a condition of their permit approvals and authorizations.

Compensation is required to off-set an adversely affected resource function with a function of equal or greater value. If on-site or off-site ecologically appropriate permittee-responsible mitigation is not available, practicable or otherwise wholly or in part acceptable to off-set lost resource function and value, an applicant may opt to pay a fee in lieu of (ILF) a compensation project. The Maine Atlantic Salmon Restoration and Conservation Program is an ILF compensation program established to provide applicants with a flexible compensation option.

NOTE: All ILF payments received by the Department of Marine Resources will be made available for grant awards to qualified Atlantic Salmon habitat conservation projects. The Department reserves the right to deny a request for conditional payment of a compensation fee based on an applicant?s prior payment record.

All compensation fee amounts could be directly reduced by decreasing the amount of habitat degradation associated with each project. 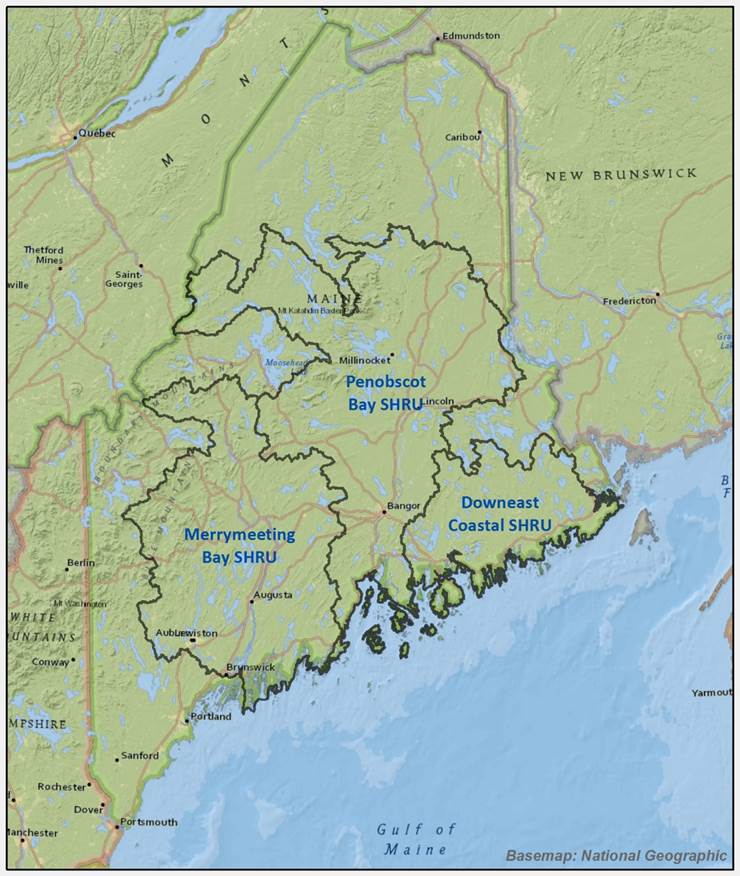 Habitat Unit: A habitat unit is defined as 100 square meters or 1076 square feet.

Atlantic Salmon Habitat Model: A predictive Atlantic salmon habitat model was created to help inform the listing of critical habitat as well as inform decisions on species stocking, barrier removal, and prioritizing restoration projects. This GIS-based habitat model calculates the amount of habitat by multiplying the area of a stream (length x mean width) by the mean percentage of potential rearing habitat.

If the upstream habitat unit value has not yet been calculated, GIS can be used to perform the calculation. The habitat model is available as a shapefile. Users are expected to be able to select all the stream extent upstream of a crossing represented by the habitat model. The User can then sum up the predicted values of habitat units to develop the total units affected.

If a stream is not mapped as perennial, the stream must be surveyed and a habitat unit number should be calculated from the survey. This field survey should be conducted in coordination with the USFWS and MaineDMR.

Direct Impact of Habitat Units: Impact areas for a project proposal area calculated and reported to the ACOE and other natural resource agencies as a part of a standard Corps permit or authorization application. Impacts to ATS habitat can be calculated in the same way for non-Corps permit impacts under review by the USFWS.

A bridge replacement project is planned over Hoak Brook, which is a tributary to the Medomak River. The steps below will guide us the unit calculation process.

Step 1: Habitat Units Blocked
The snapshot below is an example of the crossing information from the Maine Stream Habitat Viewer (MSHV). The information window seen below will pop up after a crossing is selected on the map. Scroll down to the heading "Potential Effects of this Crossing" to see that there are 10.63 Atlantic salmon habitat units blocked by this crossing. 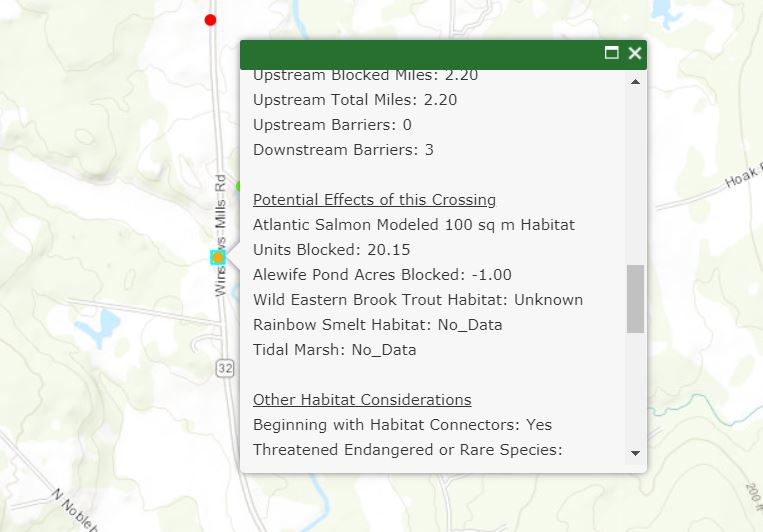