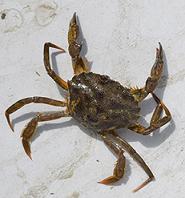 Scientists suggest that green crabs (Carcinus maenas), originally from Europe, reached U.S. shores in the mid-1800s after riding across the Atlantic in the ballast water on ships.

Once here in North America, they travelled to Maine, where they have been present for more than a century. For example, they were first spotted in Casco Bay in 1900, and had reached Jonesport by 1951.

Green crabs are a non-native, or exotic, species - organisms that have been transported via human activities and introduced to locations in which they previously did not occur.

In Maine, green crabs are among the invasive species the Maine Department of Marine Resources tracks. Surveys were conducted regularly in the 1960s and 1970s, but were not continued over the last 15 years.

Green crabs are found primarily in the soft-bottom intertidal zone favored by soft-shell clams and other bivalve shellfish. They also have been found regularly in the rocky intertidal zone.

The green crab population in some areas of Maine has increased dramatically in recent years, and they have been feeding on shellfish resources such as blue mussels and soft-shell clams, threatening the state's third-largest wild fishery. Recent anecdotal information indicates green crabs are expanding into subtidal habitats.

While there is currently no viable commercial market for green crabs, efforts are underway in the private sector to pursue a value-added process that converts green crab protein into a sustainable aquaculture feed for use in Maine and possibly for export. There are also attempts to augment commercial compost with green crabs to produce a valuable commodity. Research has been conducted at the University of Maine to produce a food additive paste made from green crabs. There have been efforts to develop a bait and pet food market from green crabs.

However, because the green crab is a non-native species and is so destructive to native resources, the Department will focus its regulatory efforts on reducing green crab populations rather than on their management as a sustainable commercial fishery.

The Department is also working closely with industry, academe, and with municipal shellfish programs to monitor and contain the spread of green crabs.

The Department issues Green Crab Exemption permits to municipalities that wish to conduct trapping or other green crab removal programs. This allows many individuals to participate under the umbrella of the municipality in green crab removal activities without obtaining green crab permits ($38 resident) or submitting landings reports.

The Department actively engages with the Army Corp of Engineers as a consultant on issuance of permits in order to conduct green crab fencing projects. Permits to conduct green crab fencing projects in the intertidal zone fall under the Army Corp of Engineers? jurisdiction because it is considered a potential hazard to navigation. The Department facilitates the application and review process for towns in order to support and encourage fencing activities. Fencing has historically proven to be an effective method of excluding green crabs from valuable bivalve shellfish resource areas.

The Department assists and encourages the use of nets associated with municipal clam seeding activities in order to encourage the survival of seed by minimizing predation by green crabs to the extent practicable. This activity involves placing a net directly on the surface of the mudflat where seed or baby shellfish are ?planted.? The net is later removed once the seed has dug in, become established, and grown to a refuge size.

The Department is committed to maintaining the health of the bivalve shellfish resources of Maine and will continue to focus its resources and efforts on education, research, and reduction of green crabs.