The following is the text of a press release, July 17, 2007, from the Maine Department of Environmental Protection and the Maine DMR.

AUGUSTA ? Biologists from the Maine Department of Environmental Protection (DEP) and the Maine Department of Marine Resources (DMR) are taking notice of the first confirmed reports in the eastern U.S. of an aggressive invasive crab species recently caught in crab pots located in Delaware Bay, Chesapeake Bay and the Hudson River (New York). The Chinese mitten crab concerns Maine scientists because of its nature to compete with native species, foul commercial fishing nets and water intakes, and burrow into shorelines and embankments, thereby accelerating erosion and flooding problems.

"At this point it's uncertain whether mitten crab can successfully compete for food and habitat in Delaware Bay or the Hudson let alone in Maine's colder waters,? says Pete Thayer, a DMR scientist. ?Key to addressing any potential damage by this species is to report sightings immediately and determine quickly how mitten crab are being transported.?

DMR asks the public to call Robert Russell at 207-633-9524 (during business hours) should they find any suspicious crab with these unusual features: dark furry growth on its pincers, which are both of equal size; a body (carapace) up to 4-inches in width, total size (including legs) up to 12 inches (see picture below); and a green-brown color. A mitten crab cannot swim; it walks on its eight legs. Also, it is the only crab in North America able to inhabit fresh water.

DMR officials urge that crab specimens be kept alive or frozen for identification. Live animals should not be returned to the water. 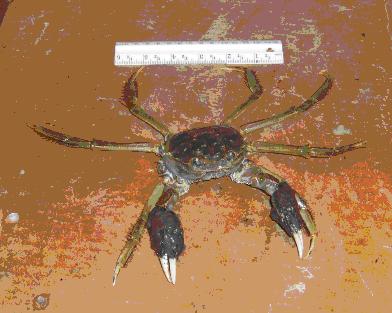 The mitten crab established itself in San Francisco Bay where it was first found in the early 1990s and is believed to have arrived in ship ballast water.

In Asia, mitten crab is a delicacy and crab have been imported live to markets in several California cities. The species is listed as Injurious Wildlife under federal law that prohibits importation, export, or interstate sale without a permit. Mitten crab populations are also fully established in European waterways between Scandinavia and Portugal. They were first detected in Germany in the early 1900?s.

Maryland and Virginia officials are determining whether shipping ballast accidents or residents who possess or breed mitten crabs account for the recent findings. To date seven mitten crab findings have been documented in Chesapeake and Delaware Bay waters?five in May 2007 alone. More recently, New York biologists reported a single mitten crab (photo below) that was caught on June 3rd near Tappan Zee, 27 miles from the mouth of the Hudson River.

?that's far from an invasion, but it certainly has our attention,? says Maine DEP biologist Jim Stahlnecker. ?As we?ve learned from Variable milfoil, Asian shore crabs and other nuisance species we?ve managed to live with here in Maine, one cannot predict much from initial sightings?especially for a species with such a complex life cycle as the mitten crab which lives in both fresh and salt water. It would be impossible to imagine all the possible ways in which a large population could affect fresh and brackish water bottom-dwelling species because ecological impacts of mitten crab infestation are the least understood of all impacts. that's why reporting is essential.?

Mitten crab live primarily in fresh water, but migrate to the sea to breed. In late summer, four and five year olds move downstream to mate in tidal estuaries. Afterwards, females continue seaward to overwinter in deeper water and then return to brackish water in the spring to hatch their eggs. A female can carry between 250,000 and one million eggs. Eventually, juvenile crab migrate gradually upstream into fresh water?often by walking on land over levees and dams?to complete their life cycle.

Fisheries experts across the Chesapeake Bay and New York are on alert with the recent findings, raising questions whether the species could threaten already struggling native crabs and shellfish. Though omnivores, the mitten crab eats small worms and juvenile shellfish which also support the blue crab fishery. It prefers habitat similar to native crab, and under the right conditions can breed rapidly.

According to DMR's Pete Thayer, the likelihood that the mitten crab has established itself in eastern U.S. waters remains unclear. ?There?s a huge leap between a pioneer specimen and a viable population,? notes Thayer. ?They face all sorts of challenges?temperature, adaptation, even pollution. In the meantime, we want folks to be on the lookout.?

For more information and pictures, visit these links:

For larger pictures, select each photo below: