Biotoxin closures of shellfish areas are different than closures based on bacterial pollution, although both closures occur because conditions in the water make shellfish unsafe for human consumption. Maine's Department of Marine Resources Public Health Bureau monitors several biotoxins produced by different types of marine algae known as phytoplankton.

It's normal for biotoxin-producing algae to be present in marine water. They are usually at very low concentrations and pose no problems.

During winter months, some phytoplankton cells turn into cysts which lie dormant in the ocean 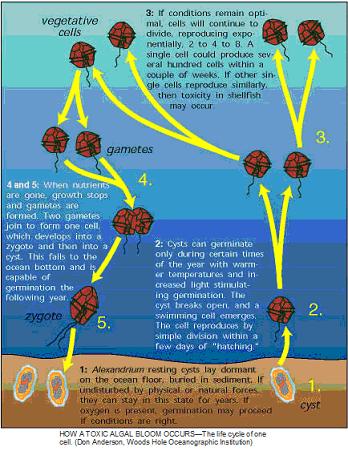 Toxic cells are consumed by shellfish that feed by filtering tiny organisms from the water. These shellfish include mussels, clams, and oysters. After the cells are digested, the toxin remains behind and can accumulate in the tissue as more toxic phytoplankton is ingested. This toxin is transferred through the food web when other species, including humans, eat the toxic shellfish.

Harmful algal blooms in Maine typically occur between April and October, but the species of phytoplankton that causes Amnesic Shellfish Poisoning, Pseudo-nitzschia, has bloomed in recent years during winter months. 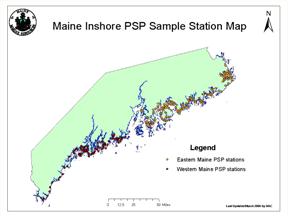 The State of Maine, Department of Marine Resources Public Health Bureau tests coastal shellfish areas for biotoxins weekly, beginning in March and going through October, or later when necessary.

Precautionary regional closures along the coast are implemented annually starting in May when the likelihood of biotoxin blooms increases with the temperature. These closures target species that are impacted by biotoxins more rapidly, as well as lower value species. Annual precautionary regional closures allow the department to focus its resources on monitoring certain shellfish and aquaculture sites which are of higher value.

For most types of phytoplankton, when routine water sampling detects cell concentrations (in terms of numbers of cells per liter of water) that are known to produce toxins, sampling of shellfish begins.

When shellfish samples are shown to have toxins in concentrations specified by the National Shellfish Sanitation Program, areas are closed to shellfish harvesting.

Because shellfish become toxic more rapidly when they are exposed to Pseudo-nitzschia, the Department has made the decision to close shellfish areas precautionarily when ASP is first detected in shellfish meats. The areas are reopened upon additional testing, if appropriate. This approach will prevent the need to conduct recalls of product harvested between the initial toxic sample and follow up shellfish sampling.

Paralytic Shellfish Poisoning (PSP) - Although it does not usually produce red water, Alexandrium is referred to as Red Tide. People usually display PSP symptoms within 2 hours of consuming impacted shellfish. Mild symptoms include numbness and tingling of the face, arms and legs, followed by headache, dizziness, nausea and muscular incoordination. Severe poisoning causes muscle paralysis and respiratory failure within 2 to 25 hours.

Diaherretic Shellfish Poisoning (DSP) - As the name suggests, this syndrome manifests itself as diarrhea and abdominal pains. Nausea and vomiting may sometimes occur too. DSP and its symptoms usually set in within about half an hour of ingesting impacted shellfish, and last for about one day. Recovery usually occurs within three days, with or without medical treatment.

You can find out whether it is safe to harvest in a specific area by visiting www.maine.gov/dmr/fisheries/shellfish/closures. Bacterial closure information which is caused by pollution instead of biotoxins is also located on the same webpage. Harvesters should also check the bacterial closure notice to determine if the area of interest is closed or subject to harvesting restrictions due to bacterial contamination. A biotoxin map is also included in the table when a closure is present, however, all harvesters are encouraged to open the notice and read the closures carefully or call Marine Patrol to be sure they are harvesting from an open area.

For recreational harvesters, the areas of interest in the Biotoxin Closure table are Areas 100-A (South Berwick to Bristol), 100-B (Bristol to Stonington), 64-A (Stonington to Machiasport), and 64-B (Machiasport to Calais).

Daily limits for recreational harvesters vary by species. Information can be found at /dmr/fisheries/shellfish/shellfish-identification.

A list of municipalities with shellfish conservation ordinances can be found at /dmr/fisheries/shellfish/municipal-shellfish-management-program/general-shellfish-ordinance-information.

Please contact the municipal office in the community you're interested in to confirm the need for a recreational harvester license and for additional information on their shellfish conservation ordinance.