With the recent release of three hundred mature Atlantic salmon into the upper reaches of the East Branch of the Penobscot River, the state of Maine has taken another step forward in its effort to restore the critically endangered species.

The release was a milestone in a three-year project designed to increase the number of Atlantic salmon that spawn in the favorable habitat of the East Branch.

“The East Branch of the Penobscot has lots of high-quality habitat for Atlantic salmon, but mortality in both the marine and freshwater environments prevents many from reaching it," said Department of Marine Resources (DMR) Scientist and project lead Danielle Frechette, Ph.D.

“One of the best ways to help Atlantic salmon move towards recovery is to have more adults spawning in this high quality, but largely vacant habitat.”

It is estimated that 100,000 Atlantic salmon once made the annual spawning migration back to the Penobscot River. However, dams, log drives, pollution, and overfishing combined to bring Atlantic salmon to the brink of extinction.

Frechette explained that poor survival in the ocean has made the problem worse and is a key hurdle on the road to recovery. “For Maine Atlantic salmon, the average survival at sea is less than a tenth of 1%, which means that more than 99% of the salmon that enter the ocean do not survive to make it back to Maine rivers to reproduce as adults.”

With funds from a NOAA Section 6 Species Recovery Grant and a US Fish and Wildlife Service Recovery Challenge Grant, DMR and partners including the University of Maine’s Center for Cooperative Aquaculture Research (CCAR), Cooke Aquaculture USA, US Fish and Wildlife Service (USFWS), NOAA Fisheries, and the Penobscot Indian Nation, launched an effort in 2019 to help increase the number of adult salmon available to spawn in Maine rivers.

Dubbed the “Salmon for Maine’s Rivers Program,” the project is designed to allow salmon to avoid the high mortality at dams and at sea by raising them in captivity to the mature, adult stage. “Raising them to maturity in aquaculture pens is critical to the success of this program,” said Frechette. “The ability to rear salmon in saltwater while protecting them from the hazards that they would encounter in the wild ensures more spawning adults in the Penobscot than we would otherwise see.”

In 2020, adult salmon that returned to the Penobscot River were collected and taken to the USFWS Craig Brook National Fish Hatchery to spawn. Their offspring were transferred to Green Lake National Fish hatchery where they were raised to the smolt stage, which is the life stage at which young salmon migrate to the ocean.

In May 2021, in collaboration with USFWS, DMR transferred smolts from Green Lake National Fish Hatchery to saltwater tanks in the recirculating aquaculture system at the CCAR facility in Franklin. “The CCAR staff’s expertise and facilities were key to moving this project forward,” said Frechette.

While hatchery spawned fish ensure a consistent supply of smolts, future plans call for salmon smolts captured in the wild to be used to stock the aquaculture pens. “Salmon spawned in the natural environment are better suited to survival in the wild because of natural selection,” said Frechette.

On the day of the release, Cooke Aquaculture USA provided trucks to transport the salmon from CCAR to the East Branch. “Cooke’s experience safely transporting and handling live salmon and working on wild salmon recovery programs ensured the health of all the fish during the long, three-hour trip north,” said Frechette.

With volunteers and partners helping, the fish were offloaded from oxygenated tanks by way of a long tube that extended directly into the river. “It was great to see the salmon as they entered the river and began what we hope is a long and safe journey,” said Frechette.

Biologists from DMR and the U.S. Geological Survey Cooperative Research Unit at the University of Maine will track the released salmon as they spawn and make their way out to the ocean, using a combination of canoe surveys to look for redds, which are nests where salmon deposit eggs, and acoustic telemetry to track tagged salmon among those released.

“Our goal with this project is to take a step toward restoration of this iconic, endangered species, and to explore how this novel approach, which includes the use of aquaculture to bypass the hazards in the freshwater and marine environment, can play a part in the success of this effort,” said Frechette. 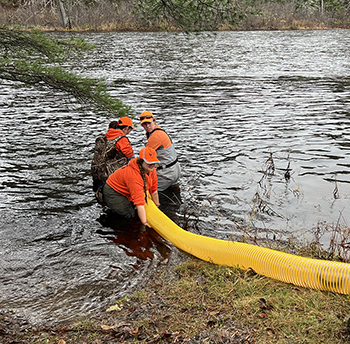 Program volunteers and partners joined Maine DMR staff on the East Branch of the Penobscot recently to release 300 mature Atlantic Salmon as part of a program to restore the iconic, endangered species.