State Trooper and Jeep struck by Tractor-Trailer in Kittery 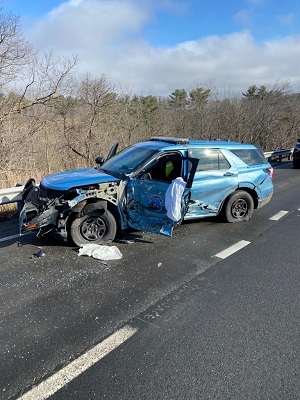 On March 16, 2022, at approximately 9:20 a.m., Trooper Robert Flynn had his blue emergency lights activated and was stopped near mile marker 1 in the southbound breakdown lane, behind a flatbed truck that was being towed for a mechanical issue. A tractor-trailer being driven by Johnny Rogers, 52, of Canastota, NY, drifted into the breakdown lane and struck Trooper Flynn’s cruiser. The tractor-trailer then veered back into the travel lanes, ending up in the far-left lane, striking and pinning a Jeep Cherokee, against the concrete barrier in the median. The occupants of the Cherokee were a husband and wife and two children. The driver for National Towing was underneath the flatbed truck trying to fix the mechanical issue at the time of the incident and miraculously suffered no injuries.

Fortunately, the Trooper, occupants of the Cherokee and flatbed truck that was stopped, only sustained minor injuries and are being evaluated at the Portsmouth Regional Hospital. The driver of the flatbed truck had exited the vehicle while the tow truck driver was working on it and was struck by a piece of debris from Trooper Flynn’s cruiser and is also being evaluated for what are believed to be minor injuries.

Rogers is being charged with failure to move over for an emergency vehicle and distracted driving.