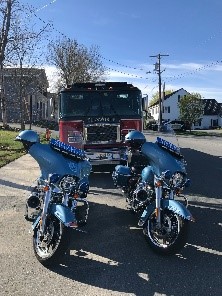 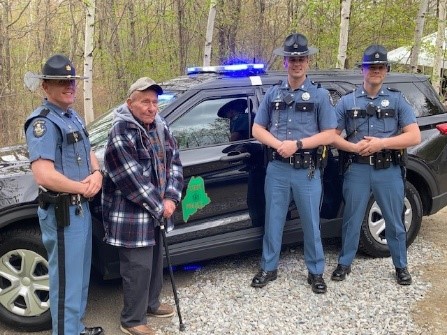 05/08/2021- Members of Maine State Police Honor Guard are pictured here with Trooper Harry A. Hansen (ret. #403.) beside the 100th Anniversary State Police cruiser. Tr. Hansen is the oldest living retired Trooper to date. The Honor Guard met Tr. Hansen after performing an honorable flag fold and presentation at a retiree’s remembrance ceremony in Litchfield on May 8, 2021.  Honor Guard members continue to bridge the gap between current and retired members in an effort to keep our retires more involved in the MSP.

·         On 04/03/21 Troopers from section 1 set up a move over detail on Route 4 in Auburn. Winn’s Towing brought out a wrecker loaded with a vehicle and parked it on the shoulder. From the hours of 1800-2000 there were 19 stops, 17 warnings and 2 tickets. The vast majority of the traffic obeyed the move over law. Many of the stops served as a good opportunity to remind and educate the public. We were also assisted by Androscoggin SO. April 3rd is a day Trooper’s and Law Enforcement across the State will never forget. This detail was focused on making the roadways a safer place for Public Safety workers. RIP Detective Campbell. 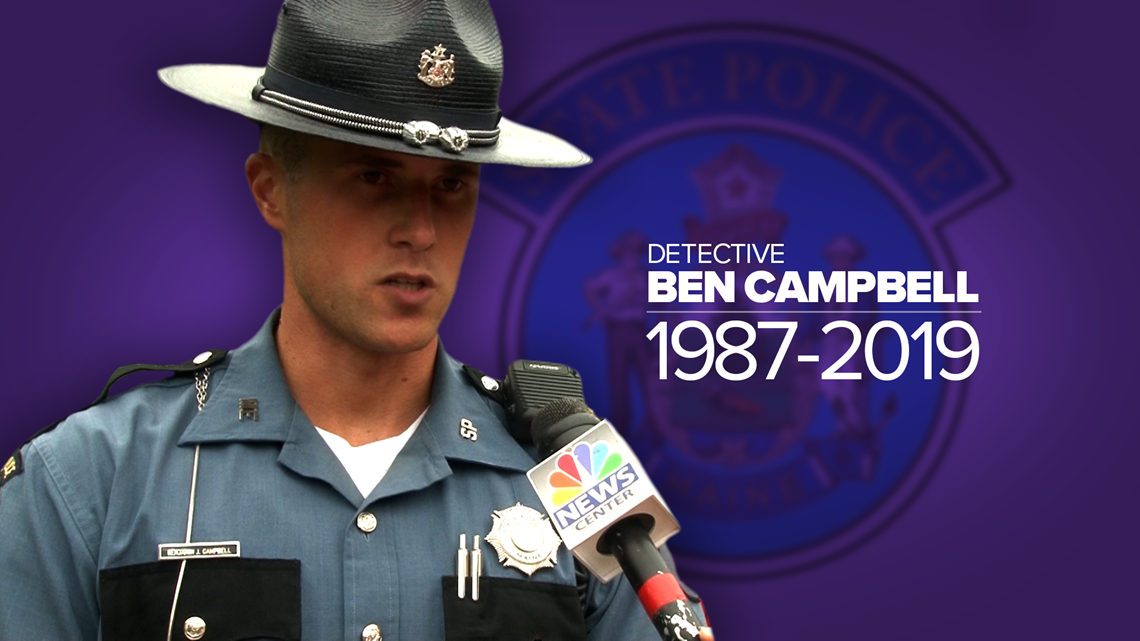 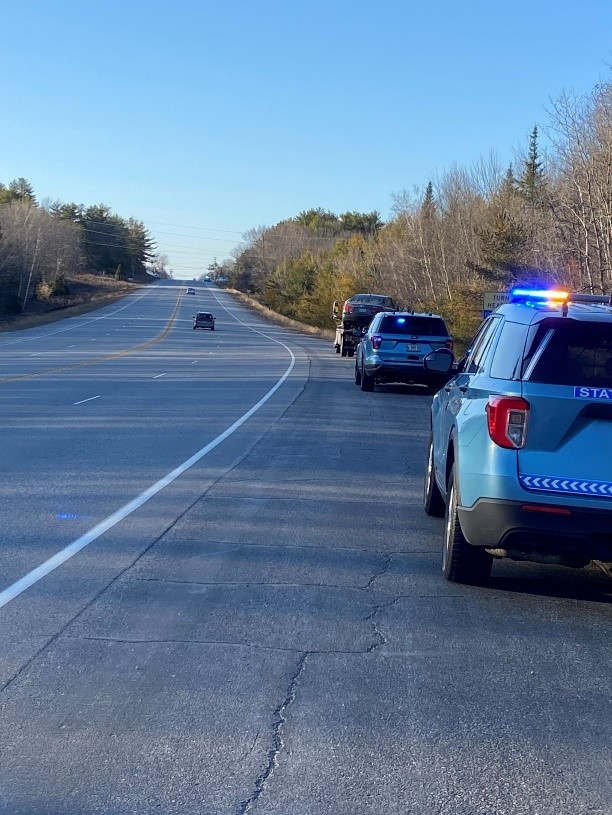 ·         On 04/03/21 Tr. Lemieux was traveling south on I-295 in Falmouth. He noted a Dodge Avenger traveling in front of him. The vehicle had multiple defects and was swerving in and out of lane two. Tr. Lemieux conducted a motor vehicle stop and identified the driver as Lee Wilson. WILSON provided an Oregon identification card. LEE license in Maine was suspended and he only had an identification card in Oregon. LEE was on probation for Unlawful Possession of Scheduled Drugs. He also had a non-extraditable warrant out of Washington for robbery. LEE probation officer was contacted. A search of LEE person and vehicle did not locate anything worth note. The vehicle was towed, and LEE was issued a USAC for OAS.

Brief Synopsis: The Honor Guard fulfilled a request for Legendary Trooper Bureau’s wake in the city of Auburn.  Family members had requested a casket watch during the wake. Participating members were Wells, Casey, Hink, Russell, and Farley. On 03-09-20 the Honor Guard fulfilled a request for Legendary Trooper Bureau’s funeral services and Honorable transfer to final resting place in the city of Lewiston.  Family members had requested an Urn team and Honor Transfer from the Auburn funeral home to the Basilica in Lewiston. Participating members were Plourde, Flanagan, Russell, Dunn, Farley, and Burke.  The Honor Transfer was worked in close conjunction with the motor unit and members of Troop B.  Honor Guard personnel also worked with the Marine Corp Honor funeral services unit at the cemetery.

Brief Synopsis: On 3/11/20 Tr. Nadeau responded to Wales for a report of a domestic. The caller reported she found a female on the side of the road walking who was all beat up from a fight she had with her husband. The caller reported that the male suspect had fled into the woods. Once on scene Tr. Nadeau spoke with a female (37) of the above address. The female stated she got into an argument with her husband (42). She stated her husband hit her in the face with a storage bin, pushed her down and then fled out the back door. The female had a black eye, a laceration on her neck and stitches on her hand had ripped open from a prior injury. Tr. Nadeau was able to locate he husband down the road and  arrested him, transported him to ACJ, and charged him with DV Assault. DHHS was also called because the female’s 9-year-old daughter witnessed the assault.

WEST GARDINER, Maine - A Portland-area man was arrested earlier today after a traffic stop revealed he had a felony warrant.

On the morning of Feb. 1, 2020, a Trooper from Troop D stopped a vehicle traveling Northbound on Interstate 95 in West Gardiner for operation. During the roadside investigation, it was learned a passenger in the vehicle was Levar Green, 42, of the Portland, Maine area, had a fully-extraditable Felony Arrest Warrant out of Kennebec County for Domestic Violence Assault and Violating a Protection from Abuse Order.

Green was arrested without incident and transported to Kennebec County Jail where bail was set at $5,000.

Brief Synopsis:         Tr. James took a report of a 10-59 “bucket truck” at mile 34 in Topsham. Tr. James found the truck trying to drive down the breakdown lane with two blown tires. The driver and passenger were warned to have a wrecker tow the vehicle and not to move the truck any further; they agreed. Tr. James circled back around an hour later to find the truck now at mile 31 and still moving. Tr. James stopped the truck and radioed for a commercial vehicle unit to assist. The driver, Lorezno Garcia (37) of Florida was charged with Operating Without a License. Tr. Northrup was also going to charge the company with several federal violations.

Brief Synopsis: Cpl. Hink responded to a single vehicle crash on the Shotgun Gulch Rd. in Hiram. The investigation revealed Pricilla Howard was the operator of the vehicle. Howard showed obvious signs of impairment and was subsequently arrested for Operating Under the Influence – Alcohol.

Brief Synopsis: Shane Rines was arrested in West Paris for felony theft by receiving after Troop Detective Fillebrown and Tr. Recruit Lemiuex located a stolen trailer and tools from Gardiner at Rines residence.   The investigation started after Tr. Recruit Lemieux had observed tools in the back of Rines pickup during a traffic stop the evening before in Auburn.  The tools had names written on them and after calling the company Lemieux was advised of the theft. (Troop Detective Fillebrown and Lemieux had interviewed Rines a month prior in regard to other stolen trailers at his previous residence in Buckfield).  Through the investigation more information was revealed in reference to a stolen trailer in Greene and Androscoggin SO charged Rines with felony theft. Investigation is ongoing and further charges are possible.

Brief Synopsis: Trooper Pyburn summonsed Mathew Perkins of Norway, with Operating After Suspension. The stop occurred on Route 2 in Bethel, for a hands-free violation.

Brief Synopsis: Androscoggin County Sheriff’s Office received an emergency 911 call from a resident on the Butter Hill Road in Livermore reporting a disturbance between a male and female. Deputies were advised that the female had taken off on foot heading towards the area of Brettun’s Variety, (Route 4) in Livermore. Deputy Mike Mejia arrived at Brettun’s Variety minutes later and was flagged down by a male who reported his vehicle had just been stole, while he was inside paying for gas.  The male informed the Deputy that his three young children, ages 6, 4, and 2 were inside the vehicle, which was described as a black 2010 Jeep Wrangler. Deputies immediately notified all surrounding law enforcement agencies to be on the look-out (BOLO) for the vehicle and began searching for the vehicle.  At 9:00 am, Livermore Falls Police Officer Bachelder observed the Jeep heading north on Route 4 in Livermore Falls.  Officer Bachelder attempted to stop the vehicle but the vehicle failed to stop, maintaining the posted speed limit, and continued north on Rt. 4 in the town of Jay.  Jay Police Officer Morin then joined in the pursuit.  Maine State Trooper’s Marcus Reny and Randy Hall were able to use a tire deflating device on the vehicle as it continued on Rt. 4 in North Jay.  The vehicle turned onto Greenridge Way, which is a dead end roadway and crashed into a garage and residence at the end of Greenridge Way. The operator, who has been identified as Shannon Lee Dupree (42) and was taken into custody.  The three children were not injured and were quickly reunited with their father.  It was confirmed that Dupree was involved in the initial disturbance call on Butter Hill Road.  The operator was arrested and has been charged by both the Androscoggin County Sheriff’s Office and the Livermore Falls Police Department.

Brief Synopsis: On 11/6/2019, Tr. Willard and Tr. Rec. Lemieux stopped ME PC 689XC southbound on Route 136 in Durham for a speed infraction.  Upon further investigation, it was found the operator, Jonato Mbongo had a suspended driver’s license and was summonsed.

On 11/7/19 Sgt. Quintero conducted a traffic stop of Sarah Crane (41 YO) of Rockland. After finding evidence of recent crack cocaine use in the vehicle Crane was arrested for 2 counts Unlawful Possession of Schedule Drugs in the town of Waldoboro. Crane was booked into Two Bridges Regional Jail.

On 11/7/19 Tr. Belanger stopped Tyler Saucier (25) of Lewiston on Upper Pond Rd in Litchfield for a loud exhaust. Saucier’s registration was suspended and was charged for operating with a suspended registration.

On 11/7/19 Tr. Plourde stopped Dustin Perry (19) of Fairfield on I-295 for a failure to display registration. Dustin was found to have a suspended license and was summonsed.

On 11/7/19 Tr. Dunn received a report of an ongoing harassment issue involving an ex-employee at the Farmingdale Dunkin Donuts. Tr. Dunn later learned that Nathan Price (32) of Randolph had been served a harassment order for the two managers of Dunkin Donuts and issued a trespass order for the store following his termination. One of the managers stated that Price had contacted her several days prior to calling in and that day she had also received a restricted phone call saying that someone was going to bring in a rifle to the store and shoot it up. That manager was able to identify Price by his voice and Price was later arrested and charged with Terrorizing and Harassment and brought to KCJ.

On 11/7/19 Tr. Plourde stopped Jonathan O’Donnell (43) of Gardiner on Rt. 9 in Chelsea for an expired registration. Jonathan was summonsed for Operating with Expired Registration > 150 days.

On 11/8/19 Tr. Plourde and Cpl. Wells, tasked as members of the Honor Guard to demonstrate a two-person flag fold, attended a Veteran’s Day assembly at the Dayton Elementary School in Dayton.

On 11/8/19 Sgt. Quintero approached a 4-way intersection in the Town of Hope. A white pickup truck drove directly through a 4 way stop intersection without slowing or

stopping. After a traffic stop Tyler Pearse (31YO) of Camden was arrested for Operating under the influence of Alcohol. Pearse was booked into Knox County Jail.

On 11/8/19 Tr. Nunez arrested Joshua Magaw (34 YO) of Richmond for DV Assault against his mother.

On 11/9/19 Cpl. Pelletier stopped Brittainy Mitchell (24) on Rt.1 in Brunswick for a speeding violation. Her vehicle’s registration was expired in excess of 150 days, and she was summonsed for the offense.

State Police arrested a Farmingdale man after a bail check over the weekend.

During the check, Colbert was found to be in possession of handgun ammunition and a 20-gauge pump-action shotgun with shells loaded and chambered. Colbert was arrested for being a Felon in Possession of a Firearm and Violating his Conditions of Release by committing new Criminal Conduct.  Colbert was transported to Kennebec County Jail where he was held without bail.