Trooper Kim Sawyer summonsed Cephedos G. McCabe (24) of Whiting for Operating an Unregistered Motor Vehicle>150 days after a traffic stop for speed on the Charlotte Road in Calais.

Corporal Jeff Taylor and Sergeant Jeff Ingemi responded to Whiting for a serious injury crash that a Washington County Sheriff’s Deputy came across on the Halls Mills Road.  A pick-up truck driven by Braden Pottle (20) of Lubec, crashed into a tree.  Braden suffered serious injuries along with his three passengers.  Speed and alcohol were factors in the crash and charges are pending.  None of the occupants were wearing seatbelts.  Washington Sheriff Office, Machias Ambulance, Life Flight and Whiting Fire Department assisted.

Trooper Owen Reed arrested Nicholas Jennings (23) of Castine, for Operating Under the Influence of Alcohol after a traffic stop in Castine. 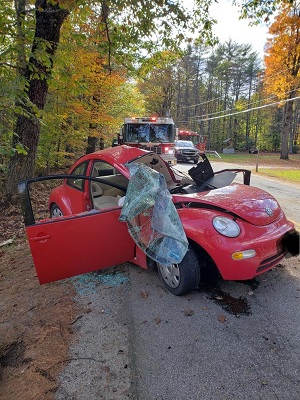 New Gloucester woman was injured after losing control of her car and hitting a tree.

50 year old Tasha Dostie of New Gloucester was traveling northeast on Snow Hill Rd when her 2002 Volkswagen Beetle left the road. Dotsie overcorrected, went into a sideways spin and struck a tree. New Gloucester Fire had to use the jaws of life to extricate Dostie from car. During that time the road was shut down. It re-opened about 15 minutes later. Dostie was taken to the hospital with non-life threatening injuries.
The investigation showed speed was a factor in the crash. 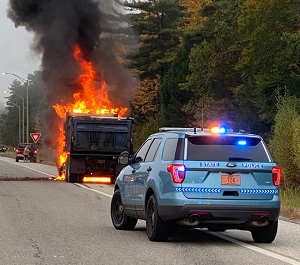 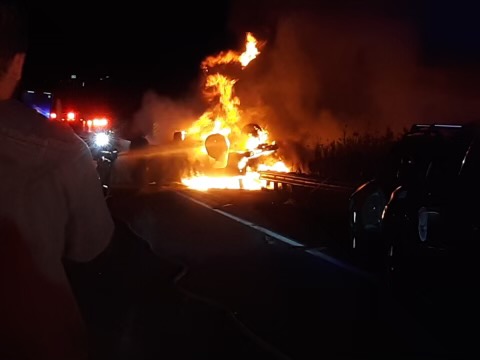 On Tuesday, October 19, 2021 at 10/19/21 at approximately 8 p.m. a Maine State Police Trooper came upon a crash near mile marker 129 northbound on I-95 in Waterville. A 2006 Chevy Pickup being driven by 25-year-old Jace Tillson of Clinton was driving too fast when he attempted to go out around a 2015 Mercedes SUV being driven by 65-year-old Kemily Benes of Embden. Tillson attempted to pass Benes in the breakdown lane but struck Benes in the passenger side. Tillson then lost control of his pickup truck. It rolled over into the breakdown lane just before the Messalonskee Stream Bridge and caught fire. The interstate was shut down for approximately 1 ½ hours while emergency crews worked to put out the fire and remove both vehicles.
There were no injuries.

On Tuesday, October 19, 2021 at approximately 3pm 21-year-old Adam Reed was traveling north on Castine Road when he lost control of his vehicle. The vehicle, A 2020 Ford Mustang, skidded off the road rolled over and struck a tree. Reed was transported by ambulance to Eastern Maine Medical Center in Bangor with serious injuries.

On October 18, 2021, around midnight, a vehicle driven by Braden Pottle (20) of Lubec crashed head-on into a tree on the Halls Mills Road in Whiting. Others in the vehicle were Kaylin Pitty (16) of Roque Bluffs, Michael Locke (28) of Machias, and Mackenzie Preston (18). Pottle and Pitty were sitting in the front and were both transported to EMMC for life-threatening injuries, however the last known report was that they were in stable condition.

During the course of the incident, a Life Flight Helicopter rotor was struck by an ambulance, and was placed out of service for a certain time.

Corporal Gavin Endre stopped Russell Boynton (61) of Lamoine. Russell was summonsed for Operating After Suspension as well as other motor vehicle violations.

Trooper Kim Sawyer received a complaint of theft.  Packages that had been delivered in Alexander have been stolen. Investigation continues.

Trooper Kim Sawyer received a complaint of a truck hauling single wide trailer and forcing vehicles off the road. Incident occurred by Ayers Junction Road in Charlotte. Thomas Farnham (25) of Baring Plantation was summoned for Attaching False Plates and Operating After Suspension.

Trooper Jarid Leonard responded to Hancock to investigate a rollover crash. Devin Beach (24) of New Brunswick was operating a fully loaded tractor trailer truck. Devin made a sharp turn that resulted in his trailer going into the ditch and ultimately rolling over. No one was injured in the crash. Hancock County Volunteer Fire Department, Maine DOT, and Dave’s Towing assisted.

Corporal Gavin Endre located a vehicle on the lawn of a residence in Lamoine. The operator Amber Wiggins (21) of Orland was arrested for Operating Under the Influence.

Corporal Gavin Endre responded to a two-vehicle crash in Gouldsboro. Veronica Gomm, (36) of Verona Island, the operator of one of the vehicles crossed the center line and struck an oncoming vehicle. Only minor injuries occurred. Dave’s Towing removed both vehicles.

Trooper Kim Sawyer summonsed Julie Johnson (56) of Machias for leaving the scene after she hit a parked car in front of the Cigarette Shopper in Machias and left.

Corporal Jeff Taylor responded to a theft complaint in Lamoine where a white trailer was reported stolen in the past week.  Investigation continues.

Trooper Jarid Leonard arrested Cody Colbeth (28) of Machiasport for Operating Under the Influence of Alcohol. 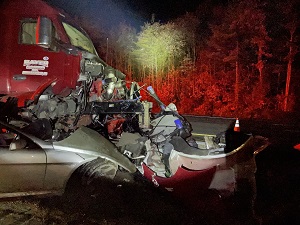