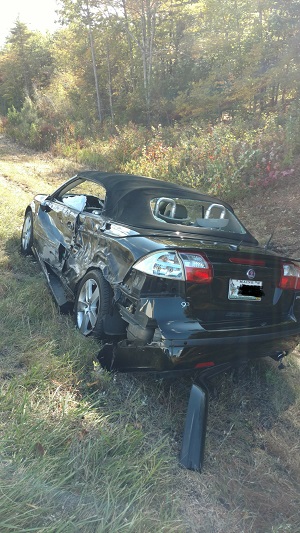 Maine State Police are investigating a crash caused by a wrong way driver on I-95.

On Sept. 20, 2020 at approximately 2:09 p.m., Augusta Regional Communication Center received a complaint of a wrong way driver traveling north bound in the south bound lane around mile marker 58 on the Maine Turnpike in Cumberland.

Two minutes later, several callers stated that the pickup struck several vehicles just north of the Cumberland service plaza.
Upon arrival, Troopers discovered there were five vehicles involved in the crash. A witness reported the red Chevy Silverado pickup left the Cumberland service plaza and drove north in the south bound lane striking the vehicles within a half mile of the plaza. The operator of the Chevy pickup was a 73-year-old male who is not believed to be impaired. Both the operator of the pickup and Saab received minor injuries. Amazingly, no one else was injured. No charges are expected at this time.