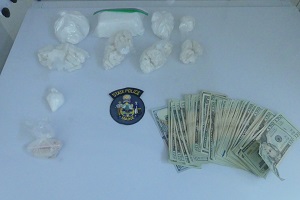 The interaction started with an individual at B & A Variety in Turner following a suspicious incident nearby. The encounter revealed that the driver, Winston Mcleod (27) was suspended, out of Oregon.

Further investigation revealed that he had a large amount of cocaine in his jacket pocket. When he was informed by the Trooper that he was being arrested, Mcleod fled on foot. A foot chase ensued which ended with a safe and successful apprehension. Members from Troop B came to assist with further investigation.

The investigation revealed Mcleod had 1,102 grams of cocaine in the car. Also seized in the stop was $1,446 in suspected drug proceeds. McLeod was arrested and charged with three counts of Aggravated Trafficking in Schedule Drugs (Class A), Refusing to Submit to Arrest (Class E), Operating a Motor Vehicle without a License (Class E), and Asset Forfeiture.

Mcleod was transported to the Androscoggin County Jail and bail was set at $25,000.