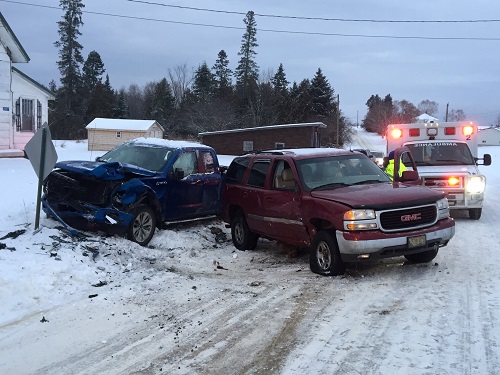 On Nov. 11, 2019,  at approximately 6:11 a.m., the Houlton RCC received a report of a two vehicle crash on the Robinson Road in Blaine with one person injured.  Tr. Nick Casavant and Sgt. Josh Haines responded and determined the following from their investigation:  Lisa Rodqiguez, 51, Bridgewater, of was traveling North in her 2003 GMC sport utility vehicle when she lost control on the ice covered roadway and spun sideways into the path of oncoming traffic.  Dana Raymond, 57, of Easton, was traveling South in his 2018 Ford truck and was unable to avoid Rodriguez’s vehicle, which was sideways in his lane, striking her head on.  Rodriguez suffered an injury to the leg and was transported from the scene by Crown Ambulance to the hospital in Presque Isle.

Both vehicles were towed from the scene with significant damage.