On 11/10/2021, Tpr. Ellis stopped Shukri Abdirahman (22) of Lewiston on the ME Turnpike for expired registration southbound in New Gloucester. Her license was found to be suspended. She was summonsed and a licensed driver drove the vehicle away.

On 11/12/2021, Sgt. Burton arrested Mohammadmorad Talebi (44) of Falmouth, ME for OUI on the Turnpike in Saco.  Talebi submitted to an Intoxilyzer test and blew above the legal limit.

On 11/12/2021, Cpl. Cote stopped Nicole Ross (22) of Sabattus on the ME Turnpike southbound in Lewiston.  Her ME driver’s license was found to be suspended.  She was charged with Operating after Suspension.  Her vehicle was towed away.

On 11/12/2021, Tpr. Reaser & Sgt. Porter responded to MM 35 southbound in Saco for a tractor trailer truck that was jackknifed across all three lanes. The operator, Brian Butler (33) of South Carolina, was in the far right lane when he started to lose control. He was not injured in the crash. All southbound traffic was diverted off Exit 36 in Saco until the Turnpike was reopened. The heavy rain conditions are believed to be a contributing factor in the crash. The investigation is ongoing. 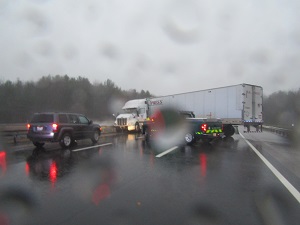 On 11/13/2021, Cpl. Cote stopped Jason Morrison (38) of New Gloucester on the ME Turnpike southbound in Lewiston.  He was found to be under the influence and put through a battery of field sobriety tests leading to his arrest.  He was taken to the Androscoggin County jail and administered a breathalyzer test.  The results were over the legal limit.  He was charged with Operating Under the Influence.