A Caribou man was killed in early morning crash on the Turnpike in Kittery.

Maine State Police is investigating a fatal motor vehicle crash that occurred on Thursday, August 5, 2021, at approximately 12:37 a.m. on the ME Turnpike. The crash, involving a passenger car and a tractor-trailer truck occurred southbound at mile 2 in Kittery by the Wilson Road overpass. 29-year-old Caleb Ewing of Caribou, the driver of the car died at the scene. The tractor-trailer, owned and operated by 46-year-old Joshua Stone of Auburn was uninjured. Both vehicles sustained extensive damage.

It is believed that Ewing entered onto the turnpike in Kittery and traveled in the wrong direction going northbound in the southbound lane. Stone and his tractor-trailer truck, which was hauling bottled water at the time, were traveling southbound and took evasive action upon spotting Ewing, but could not avoid the collision. Ewing struck the side of the tractor-trailer truck rupturing the fuel tank which caused diesel fuel to spill out onto the roadway.

The turnpike was shut down to one lane for hours while police investigated and crews worked to remove the vehicles and re-open the roadway. Assisting in the investigation were MSP’s Commercial Vehicle Enforcement Unit, the Kittery Fire Department, Kittery Police Department, York Police and Fire Departments, the DEP, and National Wrecker Service.

The investigation is ongoing. It is unclear at this time if speed and alcohol were contributing factors. 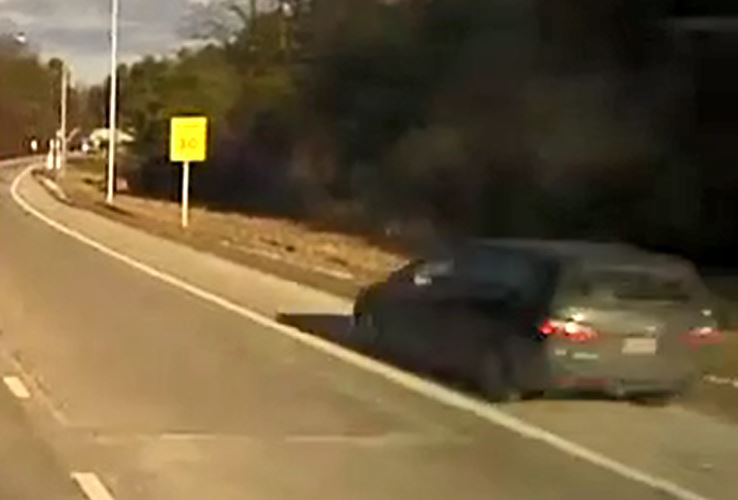 Maine State Police from Troop G wish to speak to the occupants of the van pictured here on the Maine Turnpike taking the Kittery Rest Area exit on Jan 12, 2021. Authorities believe they may have witnessed a crash between two tractor trailers that day at approximately 2:10 p.m. Anyone else who witnessed the crash should call Cpl. Ricci Cote of the Maine State Police at 207-624-7076.