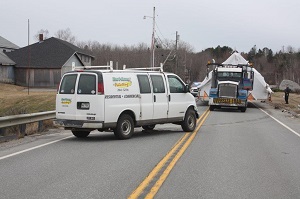 On April 7, 2022, at approximately 11:49 a.m., a wide load was being escorted from South Paris to Lubec. As the vehicle was traveling east on Route 1 and was approaching the Sullivan bridge. There was a van crossing the bridge in the oncoming westbound lane. The driver of the wide load applied brakes as the van approached, causing the load to shift and the tractor skidded and the vehicles collided.

The driver of the van was Clarence Hardwick, 65, of Gouldsboro. He was injured and taken to  Northern Light EMMC with injuries that are not life threatening.

The driver of the tractor-trailer is Aaron Small, 41, of Oxford, was not injured.

UPDATE: Rt. 1 in Hancock has reopened

A head-on crash on Route 1 in Hancock has shut down the road near the town line of Sullivan. Motorists are advised to avoid the area and seek an alternate route. Hancock County Deputies are re-routing traffic in the vicinity of Tideway in Hancock.

The accident was caused by a mobile home being escorted, the load shifted causing the tractor trailer to jackknife and strike an oncoming vehicle head-on. There are possible injuries, but no further details at this time.

At around 7:20 am this morning there was a motor vehicle crash involving a dump truck and SUV on the Washington Junction Rd. in the town of Hancock.  The driver of the dump truck, Michael Fraser (56) of Holden crossed into the opposite lane. The operator of the SUV Jason Farnsworth (64) of Bucksport was travelling in the opposite direction and attempted to avoid the dump truck. The dump truck crashed into the passenger side of the SUV and then the dump truck rolled onto its side. Both operators suffered broken bones as a result of the crash and were transported to Maine Coast Memorial Hospital in Ellsworth.   The dump truck is owned by Wellman Paving out of Winterport. What caused Fraser to travel into the opposite lane is still under investigation.  Tr. Blaine Silk is the primary investigator and was assisted by several Troopers, the Hancock County Sheriff’s Office and the Hancock Fire Dept.