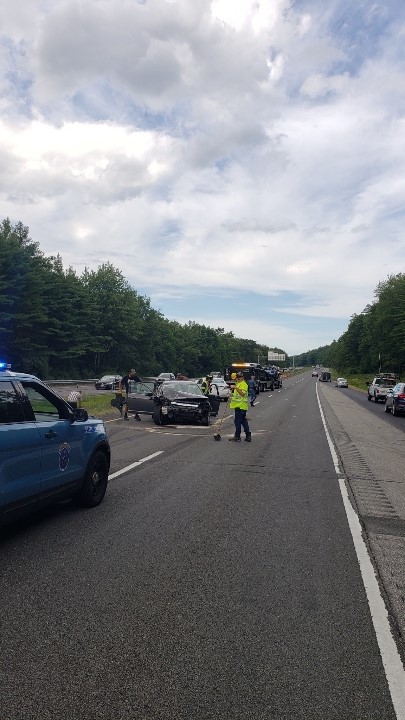 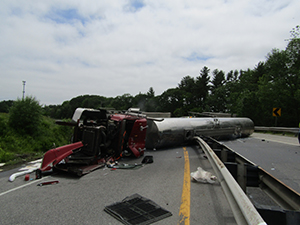 Maine State Police say a tanker truck hauling milk overturned as it was exiting the Maine Turnpike in Falmouth this afternoon.  The wreck blocked the southbound exit that leads to the Falmouth Spur at mile 52. That exit remains closed and the northbound exit was not affected. State Police Corporal Fern Cloutier said the tractor trailer, owned by Clarks Milk Transport of Canaan, was traveling to fast on the exit, collided with the median guardrail, overturned and came to rest on its side.  The truck was driven by 21 year old Ian Chadbourne of Palmyra who was taken to Maine Medical Center with minor injuries. The tanker had over 6,000 gallons of milk and about half spilled.  The rest of the cargo is being pumped out.  The milk had come from a farm in Sabattus and was headed to the Oakhurst plant in Portland.  Assisting troopers were Maine Turnpike personnel and the Maine Department of Environmental Protection.  No other vehicles were involved and that exit will likely remain closed for the evening commute.