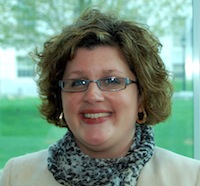 Alana Margeson, an English teacher at Caribou High School, is the 2012 Maine Teacher of the Year. A 1994 graduate of Caribou High School, she considers it an honor to work or have worked with many of her former teachers in the Caribou school system. She graduated from the University of Maine at Presque Isle in 1999 with two Bachelor’s of Science degrees- one in Secondary Education, English and one in Elementary Education. After the birth of her first child, Noah, in 2000, she worked as an ed tech at Stockholm School and as a long term substitute special education teacher at Caribou Middle School.

Alana entered her first full time teaching position at Caribou Middle School in 2001, as a grade 8 classroom teacher. In 2004, she gave birth to triplet boys - Evan, Reid and Nicholas - and took a break from coursework. In 2005, she transferred to her current position as an English teacher at Caribou High School. She earned a Master’s degree in Education Administration from Saint Joseph’s College of Maine in 2008. Utilizing her experience and observations as both a middle and high school teacher, Alana created a transitional “Step-Up Day” to acclimate and welcome incoming freshman as her Master’s capstone project. She has been a student teacher mentor as well as a teacher certification mentor. She was named a UNUMProvident Teacher’s Hall of Fame Starting 9 Nominee in 2005. She is also a member of the Association for Supervision and Curriculum Development and the National Council for Teachers of English.

Alana has greatly enjoyed and found value in professional development activities, such as Partnerships for College Success, Dr. Janet Allen’s literacy training, courses in formative assessment, and ongoing training and workshops in AP English Language and Composition. She has also been inspired by the innovative and energetic teaching of her colleagues.

Interested in inviting community members and agencies to be partners in education, Alana wrote a grant in 2009 titled “Loring Air Force Base and the Cold War.” This grant, funded by the Perloff Family and the Maine Community Foundation, allowed a panel of guest speakers, long involved with Loring, to speak to students about the crucial role the air force base played in national and international affairs, especially when under the threat of nuclear attack. A commemorative DVD of interviews was also created, and all grade 11 students were brought to the former top secret “Q” area to see firsthand the nuclear storage capacity of this former base in northern Maine.

Currently, Alana teaches grade 10 English and AP English Language and Composition, having implemented this AP offering at CHS in 2009. She writes professionally for Dr. Allen’s Plugged Into Reading and Plugged Into Non-Fiction and continues to work with colleagues on literacy techniques across content areas. In March 2012, Alana presented a workshop at the Maine Council for English Language Arts conference titled “The Effectiveness of Satire, Parody and Wit in the Classroom.”

Alana credits her amazing family, friends and colleagues for supporting her growth as a professional over the past 11 years. She and her husband, Erich, operate an organic seed potato and all-natural beef farm in Westmanland, part of Maine’s Swedish Colony, about four hours north of Bangor.