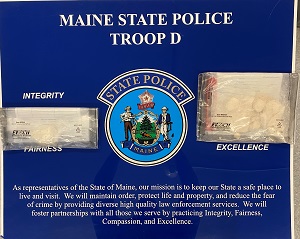 State Police say a tractor trailer loaded with French fries has overturned on an on-ramp leading to the turnpike in Scarborough.  The northbound on-ramp is closed at mile 42.  The turnpike itself is not affected. The driver suffered minor injuries.  That ramp will be closed  for the evening commute.

State and Scarborough Police continue to investigate the circumstances of last night's shooting in the Wal-Mart parking lot.   24 year old  Ryan Townsend of Saco is in critical condition at Maine Medical Center being treated for a gunshot wound.  Investigators say 24 year old Tyler Hish of Scarborough was questioned last night and released.  A woman who witnessed the shooting and knows both men also was questioned and she was also released. Investigators and evidence technicians were  on the scene until early this morning  and will be conducting more interviews today.

The Maine State Police, Major Crimes Unit and Scarborough Police Department are investigating a homicide at 193 Beech Ridge Road in Scarborough.  The 82 year old victim, James Pearson, was attacked in the front yard of his residence by an unknown assailant at approximately 8:15 AM this morning.  Scarborough Rescue transported Pearson to Maine Medical Center where he was pronounced dead.

State Police and Scarborough Police have been on scene Sunday conducting interviews and processing the crime scene.  Residents are being asked by police to maintain awareness of their surroundings and to report any unusual activities, as police continue to investigate the death.  Anyone with information regarding this case are asked to contact Maine State Police at 207-624-7076 or Scarborough Police at 207-883-6361.