UPDATE: Mr. Pelletier has been located by Bangor Police and has been checked into an area hospital. Thank you all for your assistance.

Maine State Police out of Troop C have issued a Silver Alert for Walter Pelletier, 81, of Canaan. Mr. Pelletier went missing at approximately 12:30 p.m. on Sept. 18, 2020, from his residence at 2000 Hill Road in Canaan. Mr. Pelletier suffers from dementia, hallucinations, and has kidney issues. He is described at a white male, 5’10”, 140 lbs., with gray hair and brown eyes. He was driving a Blue 1996 Ford Mustang with a vanity plate of OLDPAPA.

Mr. Pelletier stated he was going into town, Canaan Superette, to get gas and has not been seen or heard from since.  He has no phone, family is unaware of any destination he would venture to, and none of the stores in town have seen him.

Unbeknownst to Mr. Pelletier he has health problems that may need immediate medical attention. 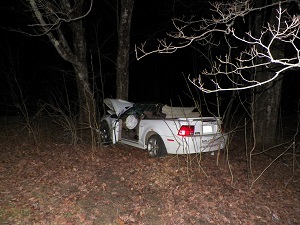 On Jan. 1, 2020, State Police charged a Harmony man in connection with a shootout with police two Sunday's ago that started in Waterville and ended in Canaan after a police chase.  Richard Murray-Burns was arrested as he was being released from Eastern Maine Medical Center in Bangor Sunday afternoon, where he had been treated for gunshot wounds since the shooting on December 22.  Murray-Burns was charged with aggravated attempted murder and was taken to the Somerset County Jail.  He was released from the hospital early this afternoon and arrested by State Police detectives who transported him to the jail.  The arrest was made following consultation with the district attorney's office and Murray-Burns will likely make his first court appearance either Thursday or Friday.

State Police say a 29 year old man is being treated for multiple wounds after he was shot by police in Canaan following a chase from Waterville, after a Waterville Police officer was shot and wounded.  Richard Murray-Burns of Harmony is being treated at EMMC in Bangor.

The Waterville officer – Timothy Hinton – was shot in both arms and was treated and released about 4:30 PM  from the Thayer unit of MaineGeneral in Waterville.  Hinton had stopped a car along Route 201 after a shoplifting complaint from Waterville’s Wal-Mart.   Hinton was fired upon as he in his cruiser and as the gunman’s car left the scene, Hinton, who was wounded,  began the pursuit until other officers could pick up the chase. Police officers from several police agencies  were involved in the pursuit, along Routes 201 and 23, ending at Route 2  in Canaan when several officers fired and wounded the suspect.

Several police cruisers in the chase were struck by gunfire from the suspect , including a couple of cruisers which were disabled.  Murray-Burns was armed with an assault styled weapon.

As is standard in officer involved shootings, the Maine Attorney General’s Office  is investigating the incident and a team of investigators were sent to Canaan.  Eight police officers  shot at the suspect and they have each been placed on administrative leave with pay, which also is standard procedure. 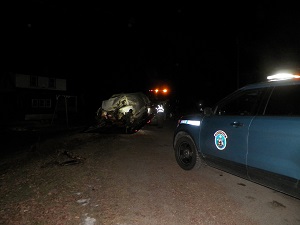 A crash left one dead and two injured in Canaan. The road was closed for five hours as Troopers investigated the incident.

On Nov. 23, at approximately 7:09 p.m., 2019, Maine State Police Trooper Garrett Booth, Trooper Eric Sucy, Corporal Rick Moody, and Sergeant Peter Michaud responded to the area 1292 Hill Road in Canaan for a report of a single vehicle crash involving three occupants. As a result of the investigation, it was determined that the driver of a 2004 Mustang convertible failed to negotiate a left turn, went off the roadway and struck a tree head-on where it came to rest.  The driver, David Johnson, 44, of Clinton and passenger Robert Archer, 58, of Clinton, were both taken to a local hospital then then transferred Eastern Maine Medical Center in Bangor for serious injuries.  The third passenger, Scott Miller, 55, also of Clinton, was killed in the crash.

Troop C personnel were assisted by Specialist Pion of the Maine State Police Traffic Unit for mapping and reconstruction purposes.  Canaan Fire Dept and Somerset Sheriff’s deputies also assisted in the emergency response.  The Hill Road was shut down for approximately 5 hours while Troopers completed the scene investigation.