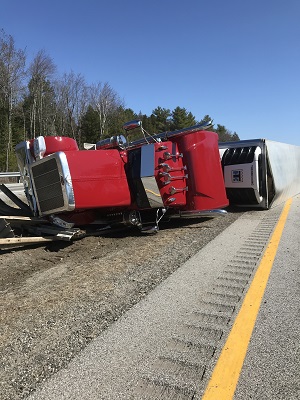 At approximately 10:15 a,.m. on Wednesday, April 14, 2021 a tractor-trailer hauling 88,000 pounds of potatoes was heading southbound on I-95 when the driver swerved and the truck rolled over. It happened at mile marker 94 in Litchfield.

The driver, 54-year-old Gregory Malone Sr. of Monticello was not injured.

As a result of the crash, the truck was leaking diesel fuel. The Department of Environmental Protection is on scene to clean up the spill. The crash also damaged 400 feet of guardrail.

The truck and debris are currently blocking both passing lanes, north and south, which are both closed at this time. These lanes will be closed for several hours as the truck needs to be removed and the potatoes, which are loaded in 100 lbs. bags, need to be offloaded.

Traffic is currently flowing in one lane.

On 04/08/2021, Tr. Kelley stopped a vehicle at MM 62 SB in Gray for an expired inspection sticker. The male operator was found to have an active warrant and was subsequently arrested.

On 04/09/2021, Tr. Libritz, Cpl. Physic, Tr. Mackinnon, and Tr. Keim responded to a single-vehicle crash that happened on I-95 northbound at MM 37. The preliminary investigation showed that Bradford Quinlan (36) of Portland was driving north on I-95 when he left the roadway and his Ford F-150 rolled over into trees.  Bradford had to be extricated from the vehicle. Bradford was taken to Maine Medical Center for his injuries and is expected to live. 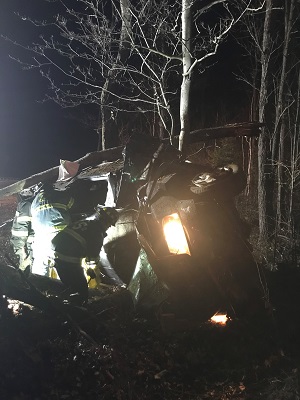 On 03/30/2021, Tr. Darcy stopped a vehicle northbound on the turnpike in Saco. The vehicle was towed due to the registration being suspended for tolls.

On 04/01/2021, Tr. Keim received a call that a white pickup had left exit 48 headed northbound and that the driver was intoxicated.  After several more calls, Tr. Keim stopped the vehicle around mile 79 in Lewiston.  Subsequently after Tr. Keim’s investigation, the driver, Devin Adams (32) of Jay, was arrested for operating under the influence.

On 04/02/2021, Tr. Loder responded to the York Tolls to meet with the driver of a Concord Bus about an unruly passenger. Tr. Loder removed the male passenger for drinking, smoking, and refusing to wear a face covering.  The passenger countered these allegations by saying he wasn’t smoking - he was vaping.  Tr. Loder sent the passenger off Exit 7 to the Park & Ride where he was able to make alternate travel arrangements.  The driver and 20+ other passengers continued their trip.

On 04/03/2021, Tr. Loder stopped a black Acura southbound in Wells for traveling 130 MPH, and charged the operator, Kevin Garcia (21) of Massachusetts, with Criminal Speed.

Adam Uldall received a 46-month prison sentence stemming from a traffic stop Sgt. Pappas had in 2020.

Tr. Kristy LiBritz is an assistant coach for the GNG Sparkling Diamond Chips. Their team came in second place at the virtual Firehouse Face Off Cheerleading Competition. This was their first competition of the season.

On 03/22/2021, Sgt. Porter assisted Portland PD with a complaint that a Ford Edge was driving erratically around the Maine Turnpike Authority lot and struck a parked vehicle. The operator of the Ford Edge was identified as Anthony Trottier (20) of Portland. Trottier had driven over one of the islands and over snowbanks, and at one point he fell out of the vehicle onto the ground. Trottier was found to have a BAC level over the legal limit and was arrested for OUI. His vehicle sustained significant front-end damage.

On 03/22/2021, Cpl. Cote investigated an assault that occurred at mile 30 southbound in Arundel.  He will be seeking an arrest warrant for the suspect.

On 03/23/2021, Lt. Baker stopped Spencer Farris of Yarmouth for 71 MPH in a 35 MPH zone on Pleasant Street in Brunswick.  He was summonsed accordingly.

On 03/28/2021, Tr. Keim responded to exit 44 north to investigate a crash that involved a stolen vehicle out of Portland.  The vehicle had exited at exit 44 and ran into the end of a guardrail. The driver was identified as James Pelkey (52) of South Portland.  In the vehicle with Pelkey was a passenger, Leroy Quiles (31) of Lawrence, Massachusetts.  Both Pelkey and Quiles were taken to Maine Medical Center with non-life-threatening injuries.  Prior to the crash, the vehicle was being pursued by Scarborough PD.  The Scarborough officer had already terminated the pursuit prior to the vehicle crashing.  Scarborough PD will be doing their own investigation.

Cpl. Physic's team won the Northern New England Tournament (basketball) this weekend.  It is one of the largest basketball tournaments that is held in Maine each year.

On 3/15/2021, Cpl. Duda conducted a traffic stop near mile 46 southbound after clocking a vehicle traveling 87 MPH. The operator, Ellen Maloney (30) of Falmouth, was ultimately arrested for operating under the influence. She was charged accordingly.

On 03/15/2021, Tr. Darcy charged Samantha Carter (39) of Lewiston with OAS as the result of a traffic stop northbound on the turnpike in York. The vehicle was towed as the registration was suspended for tolls.

On 03/17/2021, Lt. Baker stopped a male juvenile for 93 MPH in a 60 MPH zone.  The juvenile had just come out of a 50 MPH construction zone near mile 50.5.  The juvenile was summonsed accordingly and the father was contacted about the stop.

On 03/18/2021, Tr. Keller responded to a crash involving a tractor trailer and a Turnpike pickup truck at mile marker 92 northbound in Litchfield. The Turnpike truck was parked in the breakdown lane with amber lights flashing while the driver and passenger were outside the vehicle retrieving construction signs. The tractor trailer drifted into the breakdown lane, hitting the rumble strip before sideswiping the pickup and continuing into the ditch where it rolled over and spilled its load of wine. The operator of the tractor trailer, William Rodney Harrington (59) of Hartford, Connecticut, and one of the Turnpike employees were treated at the hospital. Harrington was summonsed for a logbook violation and failure to move over. Cpl. Rogers, Tr. DeGroot, and Tr. Northrup of Troop K (Commercial Vehicle Enforcement Unit) assisted.

On 03/19/2021, Cpl. Cote charged Jonathan Cesar of Lynn, MA with OUI, OWL, Operating Beyond License Restrictions, and Unauthorized Use of a Motor Vehicle.

On 03/20/2021, Cpl. Duda conducted a traffic stop near mile marker 34 northbound after observing the vehicle operating erratically and traveling at 97 MPH. The operator, Eric Strout (35) of Hollis, was arrested for operating under the influence. He was charged accordingly.

Trooper Kristy LiBritz was contacted by a Wyoming Trooper who shared the journey of the Wreaths Across America plate that was authorized to be displayed from December 6th to December 13th, 2015. David Wagener has been with the Wyoming Highway Patrol for two decades and he advised the 742 plate is now part of a plate collection in Cheyenne, Wyoming. 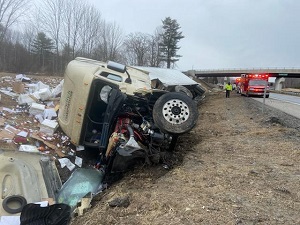 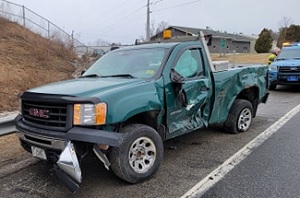 On 03/11/2021, Sgt. Pappas investigated an OUI drug crash.  The subject refused the DRE evaluation.  He was summonsed for OUI.

On 03/13/2021, Cpl. Duda summonsed a female operator from Connecticut for traveling 104 MPH on the Maine Turnpike in Wells.

On 3/14/2021, Tr. Kelley responded to a traffic complaint in West Gardiner involving a motor vehicle traveling at approximately 20 MPH with a mechanical issue.  The operator was a 45-year-old Massachusetts resident alone in the vehicle who refused to stop and continued driving north between 25-30 MPH in lane one.  The vehicle had an obvious wobble in the front end.  Tr. Verhille from Troop D assisted and Tr. Harrington from Troop C deployed spikes at mile 110.  The operator was arrested shortly afterwards.

Cpl. Physic, along with other Lewiston Rec staff, concluded a basketball program which was one of the first programs to open up since the building was shut down to Covid-19. Cpl. Physic was instrumental in implementing safety procedures to keep everyone healthy, and there were no positive cases.

On 03/02/2021, the Augusta RCC received a call on a vehicle that was traveling 100+ MPH southbound in Kennebunk before it pulled over abruptly.  Tr. Loder found the vehicle abandoned at the Wells line and discovered it had been reported stolen from Portland the night before.  A few minutes later, Cpl. Rogers came upon a man hitchhiking just south of Exit 19.  The subject – identified as Jacob Bowman (20) from Florida - admitted driving the car but denied stealing it.  Bowman said he borrowed the car from a friend and was headed to Tennessee when the car ran out of gas.  After coordinating with Portland PD, Bowman was charged with Theft by Unauthorized Use of Property.

On 03/07/2021, Cpl. Duda and Sgt. Pappas assisted in locating a reportedly armed suspect that had committed a home invasion in Massachusetts. The suspect was ultimately located in Scarborough and taken into custody without incident during a felony stop on Payne Road in Scarborough. Sgt. Kennedy and Sgt. Bryant also assisted.

On 02/24/2021, Tr. Darcy charged a 32-year-old female from Wells with OUI (1 prior) and OAS after she was driving in the ditch alongside the on-ramp to the turnpike in Kennebunk where she got stuck.

On 02/26/2021, Tr. Keller responded to a crash at Exit 75 in Auburn. Richard Manson (72) of Norway was exiting southbound when he drifted over the centerline on the ramp. He struck a vehicle entering southbound. Manson was charged with driving to endanger and operating left of center.