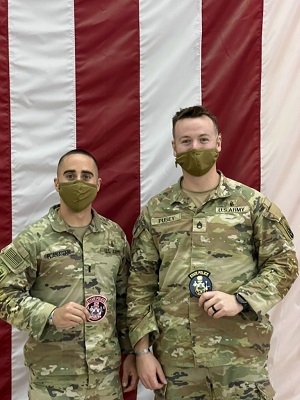 Soldiers of the Maine National Guard’s Bravo Company 3-172 Infantry - Mountain, are home after a ten-month deployment to Africa.

Two of those Bravo Company soldiers are also Maine State Troopers. And after a few well-deserved weeks off and some time to settle back into their daily routine we chatted with them about their experience and how they feel about service and being home.

Trooper Flanagan has been in the Maine Army National Guard for 10 years. He has spent that time in the Infantry with Bravo Company 3-172 INF (MTN) out of Brewer. He is currently a First Lieutenant (1LT).

Their mission in Africa was a rewarding experience and one he is grateful for. Trooper Flanagan says while he is proud of the work his team does it’s hard for everyone to be away from their family.

The hardest part for Trooper Flanagan was knowing that he wasn’t physically there to be a part of their support system.

“Missing family gatherings and holidays like Thanksgiving and Christmas were very difficult,” said Trooper Flanagan. Communication was hard and few and far between at times due to the schedule and time difference” said Trooper Flanagan. “ I missed working as a Trooper because the brotherhood is very similar to the military. I love what I do as a police officer, so not being able to put the uniform on and go out and make a difference in the community every day was very difficult.”
Upon returning home to Maine Trooper Flanagan said “It was surreal and seeing friends and family for the first time in almost a year was amazing. This was the longest period that I have ever been away so there was a lot of catching up to do with those who are close to me. I took some time to travel and vacation before returning to work as a Trooper. I am very grateful and happy to be back in Maine.”

Trooper Flanagan is serving his country and state. “Service is very important to me and I have wanted to be a police officer since I was a little kid. My father and younger brother are both police officers and my Mother and older brother are Nurses, so helping people is a family tradition” said Trooper Flanagan. “My favorite part about being a police officer is when I see the smile on someone’s face when I can make a positive difference in their life. September 11th is the reason I joined the military, and it was one of the best decisions I have ever made. It has helped shape me into the person I am today”

Trooper William (Liam) Pusey has been in the Army National Guard for 12 and a half years. He has been a part of the Maine Guard for the past 6 years and is currently a Staff Sergeant (E-6).

Trooper Pusey says the hardest part of being away was not being able to support his wife with everything at home. “She had the hardest job of maintaining the house, working a full-time job, and continuing to have a social life with our friends all on her own. The holidays were tough, missing all the family traditions and time with loved ones.” Trooper Pusey said “As cliché, as it sounds, being away from the Maine State Police, was hard because I love my job! My lieutenant kept me connected to the Troop by sending me emails with what was going on.”

Trooper Pusey also chose a path of service, both for his state and country. 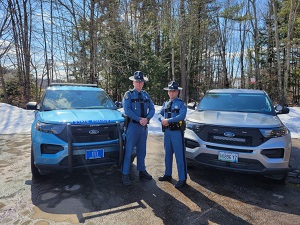 “I am sure you could ask any cop about service and you would get some form of the following: I really enjoy helping people. I have been in some form of uniform my entire adult life. I enjoy serving my community, whether it is in camo or French Blues.”
Coming home after a 10-month deployment was almost surreal. “When I returned home, it took maybe three weeks for me to believe I was actually home with my wife and family. The outpouring of support and love that I received from family, friends, coworkers, etc. was unbelievable! After a little over three weeks off after the deployment, I was more than ready to return to work.”

Welcome home and thank you for your service Troopers Flanagan and Pusey! Semper Aequus!