operating under the influence 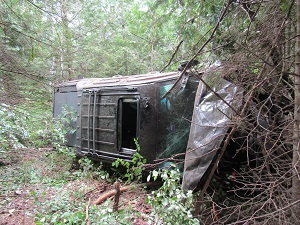 A Sandford woman is facing charges after driving her vehicle off the road earlier this week.

On April 21, 2020, A Trooper from Troop A was dispatched to the report of a vehicle off the road at the intersection of Hamilton Road and South Waterboro Road in Lyman. It was reported that there was no injury to the driver of the car, but that she appeared to be intoxicated. After arriving on scene and speaking with the driver, Darcey Nundy, 42, of Sanford, the Trooper observed multiple signs of impairment. Standardized Field Sobriety Testing was administered, which Nundy failed. She was arrested for Operating Under the Influence.

It was also discovered that Nundy had three separate sets of bail conditions, one set was for Domestic Violence Assault, one was for OUI, and the last was for Violating Conditions of Release. Two of Nundy's bail conditions also prohibited the use or possession of Alcohol. She was transported to York County Jail for an Intoxilyzer test. The test showed that her breath alcohol content was over the legal limit.

Nundy was booked at the jail on the charges of OUI (Class D) and Violation of Conditions of Release (Class E). Darcey was held without bail.

Maine State Troopers say that an alert homeowner helped stop an intoxicated motorist that had parked in their driveway.

On October 14, 2019, at approximately 1:13 p.m., Maine State Police out of Troop A received a report from a resident on South Street in Dayton that an intoxicated motorist had pulled into their driveway. The resident took the keys from the vehicle due to the high level of intoxication by the driver. It was also learned that the Biddeford Police Department had received a report of this same vehicle operating erratically in their city.

When Troopers arrived on scene they observed the driver, Brittany Boudreau, 29, of Cumberland, throw a phone onto the ground damaging it. It was learned this phone belonged to one of the residents that called police.

Boudreau was uncooperative and was arrested for OUI-Liquor and Criminal Mischief. On the way to the jail she attempted to get out of the cruiser and had to be further restrained. She refused to take an intoxilyzer test at the jail and was booked on her charges.

She failed to make bail and will make her first court appearance in Springvale District court on Tuesday at 1:00 p.m.