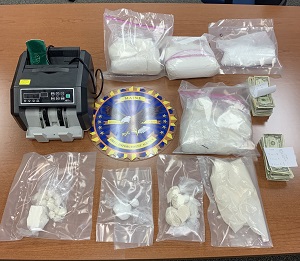 Arrest Made in Baby Death

On July 22, 2020 the Androscoggin County Sheriff’s Office responded to 592 North Parish Road in Turner for the report of a two-month infant in medical distress.  Deputies performed CPR and assisted rescue personnel with the child, who was identified as Harper Averill.  The child was brought by ambulance to Maine Medical Center in Portland for treatment.  The infant ultimately died as a result of her injuries.

On Wednesday, September 8, 2021 the Attorney General’s Office presented the case to the Grand Jury sitting at Androscoggin County.  The Grand Jury returned an indictment charging the father, 27 year old Trevor Averill with Depraved Indifference Murder and Manslaughter.  Averill was arrested at his home in Buckfield this afternoon by Detectives from the Maine State Police and Deputies from the Androscoggin Sheriff’s Department.

On Thursday, June 3, 2021, Maine State Police arrested 36-year-old Ronald Harding of Brewer. Harding is charged with manslaughter in the death of his 6-week-old infant son.

On Monday, May 31, 2021, Harding called 911 to report that his son was unresponsive and not breathing.
The child was transported to Eastern Maine Medical Center in critical condition. He was pronounced dead on Tuesday, June 1, 2021.

An autopsy performed by the Office of Chief Medical Examiner revealed that the infant died from inflicted injuries.

Ronald Harding was arrested at the Brewer Police Department and taken to the Penobscot County Jail.