Multi vehicle crash on I-295 in Portland 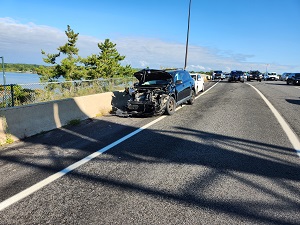 On Wednesday, September 7, 2022 at approximately 7:40 am, Troopers responded to a minor two-vehicle crash at Exit 6B southbound on Interstate 295 in Portland. That crash given it’s location caused traffic to back up into Falmouth.

At 8:20 am, due to that initial crash Troopers responded to a secondary crash in the southbound #1 lane on Tukey’s Bridge on Interstate 295 in Portland. During the heavy commuter traffic a 2016 Toyota Rav 4 driven by 20-year-old Jessica Bryant of Brunswick struck the rear of a GMC pick-up truck which pushed the driver into the breakdown median.   Bryant’s vehicle continued southbound and struck a Toyota 4 runner which struck a small Kia sedan.  The Toyota 4 runner was then pushed into a Subaru which was being driven in lane #2.   Bryant’s Toyota Rav 4 was disabled and remained in the #1 passing lane while other vehicles were pushed toward the breakdown lane.  Portland Police and Fire arrived on scene and assisted with injuries to Bryant.  She was eventually transported to Maine Medical Center with non-life threatening injuries.  Troopers arrived on scene and managed the commuter traffic by “cruiser pushing” Bryant’s disabled vehicle which was blocking all southbound traffic to the breakdown lane where it was later towed by Stewart’s and Maietta’s towing. The goal for emergency personnel is to clear roadway as soon as possible to get traffic flowing and reduce secondary crashes.

Witnesses reported that Bryant was using her cell phone prior to the crash and was a contributing factor to the major crash.

Bryant was interviewed at the hospital by investigating Troopers and summonsed for Operating motor vehicle while improperly using a handheld electronic device or mobile telephone.