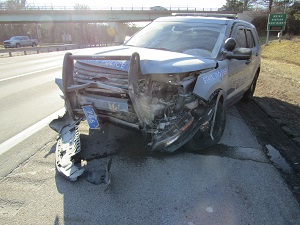 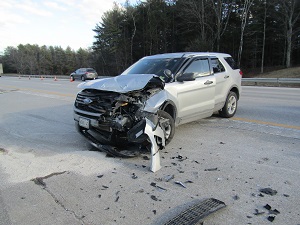 I-95 Pursuit and Fatal Crash

Maine State Police and Kittery and York Police were involved in pursuing an erratic vehicle, and are also investigating a fatal accident that occurred on I-95 in southern Maine.

On Jan. 12, 2021, around 1:17 p.m.,  Maine State Police were involved in a pursuit on the Maine Turnpike southbound from Kennebunk through York which ended with the suspect crashing in the center median at approximately mile marker 4 (near the border of York and Kittery).  This event slowed and stopped traffic in both the north and southbound lanes. Authorities received at least 6 complaints of erratic operation prior to the pursuit. Three law enforcement officers received minor injuries –  two as a result of the pursuit and one while taking the driver of the erratic vehicle into custody. The driver was transported to an area hospital for minor injuries and charges are expected.

At approximately 2:11 p.m., traffic had slowed considerably and stopped in both the north and southbound lanes. A vehicle travelling in the northbound lane was struck from behind by a tractor trailer and pushed under the stopped tractor trailer in front of it. This is a fatal accident and police are working to contact next of kin, clear the scene, and reconstruct the crash. The District Attorney’s Office will review this crash once the investigation is complete. I95 Northbound will be closed until further notice and traffic is being diverted to exit 3. Please seek an alternate route.