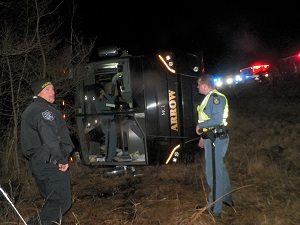 State Police say four people suffered minor injuries when a charter bus overturned late Tuesday night on Interstate 95 in Burnham, north of Waterville.  Troopers said the driver of the bus fell asleep and the bus drifted off the right side of the road, overturned on its passenger side and came to rest down an embankment .   The injured were taken to hospitals in Pittsfield and Waterville with minor injuries.  The 34 other passengers and driver were transported to a Waterville motel for the night.  The group was headed to Orono, Maine from Schenectady, NY for a Christmas concert Wednesday night.

The crash took place about 11:30 PM and the bus was up righted by two wreckers just after 2AM and will be removed from the scene shortly.  The driver  -- 65 year old Charles Barry of Omaha, Nebraska was cited by troopers for failing to maintain control of the bus.  The bus is owned by Arrow Stage Line of Omaha.

The injured passengers were three women and one man - all in their 20s and 30s.  Troopers arrived at the crash site minutes after the first calls came in of the crash and only a handful of the passengers were off the bus at the time.  A school bus from nearby Fairfield transported the uninjured passengers to the Waterville motel.  The group ranged in age from 11 to 49.   Pittsfield and Clinton Police assisted troopers at the crash site and three ambulances were used to transport the injured to the two hospitals in Pittsfield and Waterville. 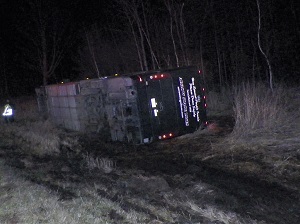