Two Sherman men are facing felony theft charges after stealing a catalytic converter from another resident.

On March 26, 2020, at approximately 7:38 a.m., State Police received a report of theft in Sherman.  The victim discovered a catalytic converter had been cut off his vehicle.  Tr. Tim Saucer responded, and his investigation led him to a residence on North Street in Sherman belonging to 36-year-old Chris McNally.

The residence was secured with the assistance of Maine Game Wardens and Maine Forest Rangers while a warrant could be drafted.  As Troopers, Wardens and Rangers secured the perimeter of the property fresh footwear impressions were

found leaving from the rear of the residence.  A State Police K-9 team tracked the suspects to a point where they were believed to have been picked up on a nearby roadway.  McNally, who was on probation for possession of schedule drugs, eventually turned himself in to State Police back at his residence. He was arrested on a probation hold and charged with felony theft.

42-year-old Larry Morgan, also of Sherman, was arrested at a nearby residence a short time later.  Morgan had a warrant from Penobscot County for possession of schedule drugs and was charged with felony theft.

Both McNally and Morgan were transported to the Aroostook County Jail.

State Police have recently seen a rise in property crimes to include burglaries and thefts this week on the Mahaney Rd in Easton and Waddell Rd in Castle Hill.  Anyone with information on any of these crimes or witnessing suspicious activity is encouraged to call the State Police in Houlton at 207-532-5400.

Slippery conditions contributed to a tractor trailer rollover in Smyrna.

On March 23, 2020, at approximately 10:39 p.m., State Police were called to a tractor trailer off the road on Interstate 95 in Smyrna. Tpr. Tim Saucier responded to investigate the crash. He determined that the driver, Biniam Tewelde, 41, of Dallas, Texas, was travelling southbound hauling a load of potatoes when he lost control on the slippery roadway and went off into the median, rolling the tractor and trailer onto its side.
Tewelde was not injured, but the unit suffered disabling damage.

On March 24, 2020, The potatoes were unloaded by hand and the unit was removed from the roadway. 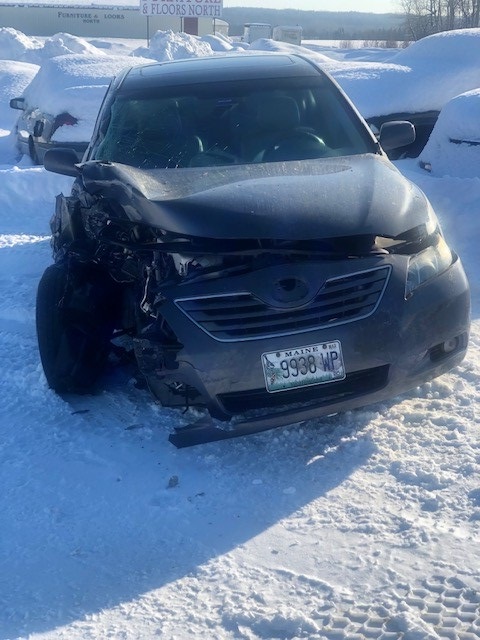 Morgan Fields, 34, of West Bath, was traveling southbound on US Route 1 in Littleton when she reached for something inside her vehicle causing her to cross the center line and go into the northbound lane in front of a northbound tractor trailer unit driven by Charles Michaud, 58, of Caribou. Michaud swerved to avoid a head on collision. Fields struck the back side of Michaud’s trailer and spun coming to rest in a snowbank on the northbound side. There were no injuries.

Field’s vehicle had disabling damage to the front passenger side corner and was towed from the scene by York’s of Houlton.

Michaud’s tractor trailer unit, owned by Carmichael Transport INC of Bangor, sustained disabling damage to the trailer and was removed from the scene by Westerdahl’s. Michaud was hauling US Mail.

Field’s was cited for Failure to Maintain Control of a Motor Vehicle. 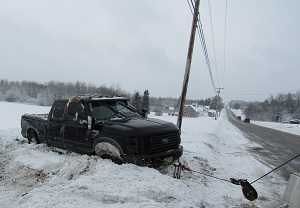 Ashley Brydon, 32, of Woodland, was traveling North On Route 161 in Woodland with her 1-year-old son.  Brydon’s vehicle drove into slush in the middle of the road and it caused her to lose control.  Brydon’s vehicle crashed into a snowbank off of the southbound lane.  The vehicle drove in the snow for approximately 10 feet when it hit a frozen section of the snowbank.  When it hit the frozen section of the snow bank, the vehicle rolled over on to the vehicle’s passenger side.  Brydon and her son were able to exit the vehicle with the help of First Responders.

Maine Game Warden Ryan Fitzpatrick assisted at the scene.  The vehicle was towed from the scene by Bealieu’s Garage. 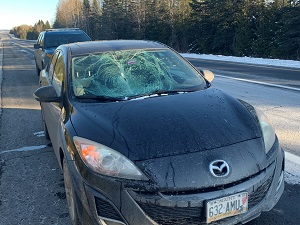 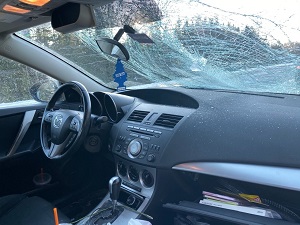 Maine State Police in Troop F are looking for the public’s assistance in identifying two individuals who burglarized a business in Eagle Lake.

If you have any information on this incident or can identify the suspects in the security camera photos, please contact Trooper Matt Curtin at 207-532-5400.

State Police say the deaths of two men inside a pickup truck in the Aroostook County Town of Castle Hill are being investigated as a double homicide. Troopers were called to the scene along Route 227 just after midnight.  The road has been closed between Turner and Waddell Roads since the early morning hours and is not expected to reopen until this afternoon. Castle Hill is between Presque Isle and Ashland.

The identifies of the victims are not being released at this point.  The two bodies are being transported to the State Medical Examiner’s Office in Augusta for autopsies, and the truck will be towed to the State Police Crime Lab for analysis.

A team of detectives, evidence technicians, and troopers have been assisted by the Aroostook Sheriff’s Office and the Maine Warden Service.  Police are asking anyone who saw any suspicious activity along the road late last night, or has information, to call State Police in Houlton at 207-532-5400.

On Friday, June 28, 2019, friends, family and coworkers of Viola “Vi” Pelletier gathered to celebrate her retirement after 28 years of service to the Maine State Police family. Vi has been the secretary for Troop F in Houlton. She has trained no fewer than seven Lieutenants in her tenure with the Troop, including Malcom Dow, Barry Smith, David McPherson, J. Darrell Ouellette, Mark Brooks, John Cote, and current Lt. Brian Harris.

“Vi is a vital part of Troop F and one of our unsung heroes. She knows our past and our history, knows how things are done and how not to do things and she keeps us on the path every day,” said Lt. Brian Harris.

“It has been a wonderful journey,” said Vi. “I found myself saying that more and more through the years. It’s been great.”