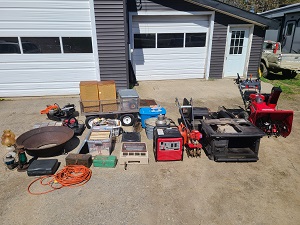 On May 5, 2022, Tpr. Thomas Bureau was called to a residence on the Morgan Pitch Road in Brooks, for a reportedly burglary. The complainant reported that he had discovered thousands of dollars’ worth of items had been taken, including a snow blower and generator, among other electronics and tools.

On May 9, the complainant called back to report another nearby property had also been burglarized and a cookstove worth several thousands of dollars was taken from there.

As a result of the investigation, Troopers met with James Hatch, 65, of Winterport and ultimately charged him 2 counts of Burglary Class-C; and 1 count of Theft by unauthorized taking or transfer Class-B. The property was recovered and returned. The items that were recovered were valued at over $10,000.