Head on crash in Livermore sends four people to the hospital 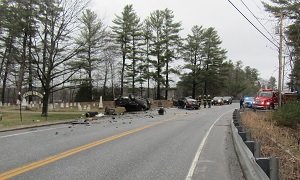 On Tuesday, April 19, 2022 at approximately 2:55 p.m., the Maine State Police responded to a two-vehicle head-on crash, which occurred on Federal Road. (Rt. 4) in Livermore, just north of the intersection of Canton Road. (Rt. 108).  The road is currently shut down and has been since 3:00 p.m. for reconstruction purposes.

Traffic is currently being re-directed at the intersection of Route 4 and Bear Pond Road in Turner. A total of four occupants were involved in the crash. They were all transported to the Central Maine Medical Center for moderate to serious injuries. Their identities are being withheld at this time pending notification to their families. The cause of the crash is still being investigated.

Anyone who witnessed the incident is asked to reach out to Trooper Nicholas Watson at 207-624-7076 (option 9) or Nicholas.e.watson@maine.gov.