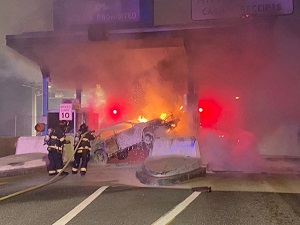 On Thursday, September 23, 2021 at approximately 1:40 a.m. 22-year-old Ethan Chase of Durham was traveling east bound on the Falmouth Spur when he lost control of his car and crashed into a toll booth.

The impact of the crash caused Chase’s car to catch fire and heavily damage a section of the toll booth. The shattered glass and debris from the crash struck 46-year-old John Schwabe of Westbrook. He was transported to Maine Medical Center for lacerations to his head and face.  He is expected to be released from the hospital today. Chase was not injured in the crash.

The initial investigation shows speed and alcohol were factors in the crash. Chase has been charged with Aggravated OUI.

The crash remains under investigation. No additional details are available at this time.

The Falmouth Fire Department assisted in the crash. An engineer from the Maine Turnpike Authority will be on scene today to access the damage.

The high speed toll lanes were not impacted.