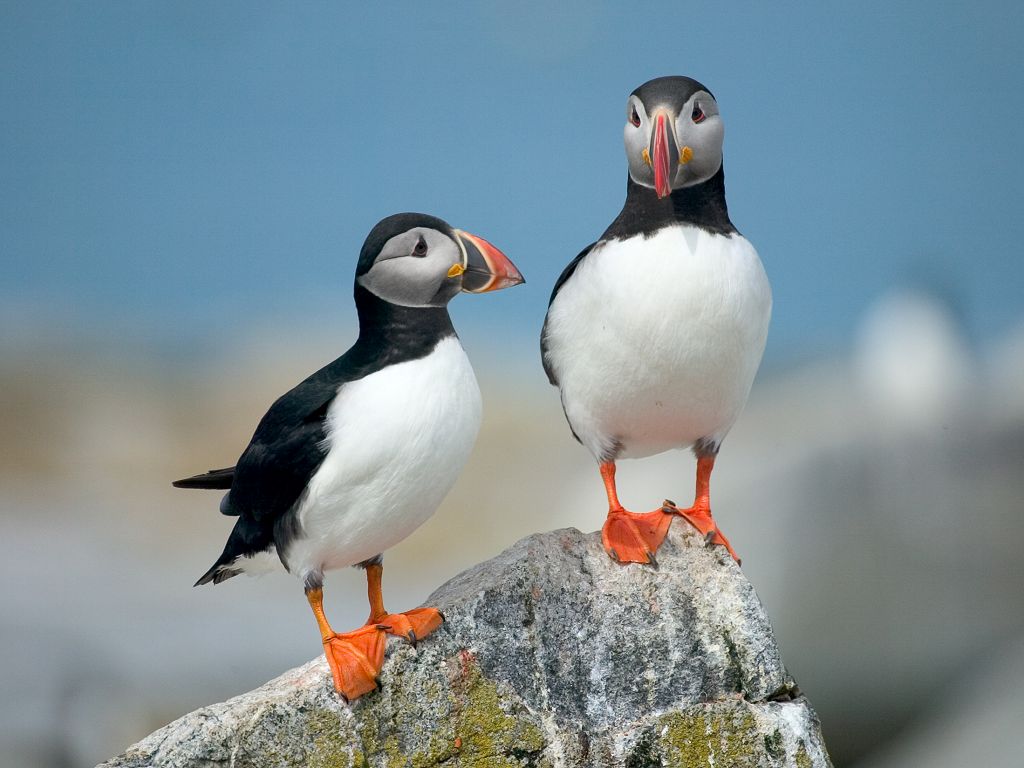 Atlantic/Common Puffin Fratercula arctica is the scientific name of the Atlantic puffin, which means little brother of the north. Puffins are members of the seabird family called alcids. The Atlantic puffin is only one of three kinds of puffins. The horned puffin and the tufted puffin are found in the Pacific Ocean. It is estimated that there are 15 to 20 million pair of puffin in the world. Puffins resemble penguins as their white underbelly contrasts their black coat. This coloring is a form of camouflage called counter shading. Puffins are 29-34 cm in length with a wingspan of 21-24 inches. Puffins are nicknamed parrots of the sea, because of their colorful triangular shaped beaks. Entering mating season in spring, the puffin's beak is red with an inner section of yellow; the corners of the beak are blue. In early fall the blue plates on the beak fall off and the puffin's breeding plumage changes to a subdued tone. The average puffin life span is 25 years. A puffin's age can be determined by looking at the number of grooves on the beak; one groove represents two years.

Puffins get from one place to another in several ways. Puffins are strong fliers averaging speeds of fifty miles per hour. The puffin's wings flap between three and four hundred times per minute. Puffins are skilled swimmers as well; their webbed feet help to move them swiftly through the water and effectively to capture small fish.

Atlantic puffins live at sea for nine months of the year and live in puffin colonies the rest of the time. It is widely believed that puffins mate for life although they do not begin the mating process until age five. When nesting, female puffins lay just one egg per breeding year with an incubation period of forty-two days.

Puffins make their homes in crevices between rocks or use their webbed feet to dig burrows. Interestingly, puffins maintain the same burrow year after year. Puffin couples do not always see each other throughout the winter but meet up at the nest each spring.

A baby puffin, puffling, is born approximately 40 days after the egg is laid. The baby needs a lot to eat and depends upon his parents to gather the necessary amount. When gathering fish, puffins specially arrange them in their beaks so as to fit the largest number possible. Both parents help in the raising of a baby. While the puffling is growing, a process called Imprinting occurs whereby the puffin learns to identify and remember a specific place or animal. By seven weeks the puffling is ready to go off on his own at which time he must survive alone. After living two years at sea, the puffin returns to the place he was born at the same time the breeding adults do. The two-year-old must wait another three years to mate.

A puffin presence along the coast of Maine has declined over time. Many factors had been blamed for this, including significant hunting and overall temperature change. In several areas puffins have been reintroduced in the hopes of reestablishing puffin-mating grounds. To read more about puffins go to: http://www.mainebirdingtrail.com/Puffins.html