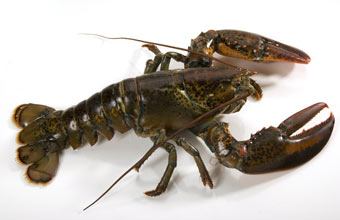 Lobster (Homarus americanus) are found throughout the Gulf of Maine. They produce eggs each summer when water temperatures reach 56 degrees °F or higher. As many as 12,000 eggs are fertilized as they are extruded onto the females stomach. Here they sit in a tight bundle until they hatch 9-10 months later.

Once hatched, the tiny larvae feed and swim vertically for 30-50 days, carried by currents in a generally counter-clockwise direction around the Gulf. After this stage, the larvae settle down to become bottom dwelling (benthic) lobsters.

Lobsters prefer to settle in rocky or cobble beds along the coast, mostly below the lowest tides. They are looking for protection from predators such as small coastal fish, crabs, and even other lobsters. They in turn feed on even smaller animal prey for their diet. Mature lobsters use their claws to crack open the shells of snails and bivalves, and will nibble on either algae or remains of dead animals.

A lobster will shed its shell, known as "molting," generally once each summer, less often as it becomes larger. The new shell takes months to complete the hardening process. A lobster may molt up to 25 times in seven years before reaching harvestable size.

It may seem odd, but mature lobsters generally migrate out to sea in the winter time, away from the coast. This is because the open ocean water stays relatively warmer than shallow bays along the coast.