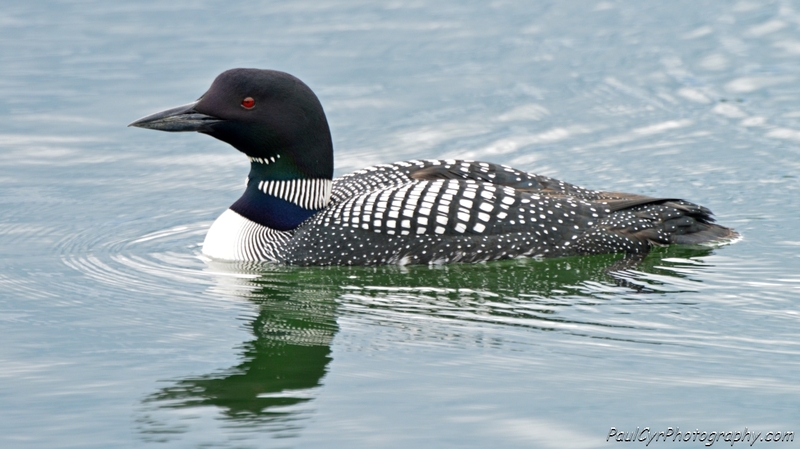 Two kinds of loons are found in Maine. The red-throated loon is mainly a coastal bird, usually only seen during spring and fall migration. The common loon, Gavia Immer, is larger and colored differently than the red-throated loon, and is found throughout the state except along the coast and in extreme southwestern Maine. The common loon displays distinctive plumage with black head and neck and white necklace; the eyes are red. The approximate size of a goose, the loon is long-bodied with a thin, short neck and black dagger like beak. In fall, adult loons become gray with white underparts while their eyes change to brown.

Loons are skillful swimmers and divers and can stay underwater for long periods of time. Loons are strong fliers although often needing hundreds of feet of take off and landing space. Loon landings have often been described as controlled crashes. Because they are so vulnerable on land, loons build their nests on the waters edge usually leaving them unconcealed. Loons prefer quiet lakes or estuarys on which to live and enjoy a diet of fish, frogs, leeches, and shellfish. It is believed that loons mate for life.

Loons are perhaps most noted for their distinctly haunting calls; four main types of loon calls exist. Wails keep loons in contact with each other; only males produce yodels when defending territory. Tremolos are used when loons feel threatened or are defending their chicks; hoots are intimate calls between a pair or a parent and chicks.

Loons are threatened by man in many ways. Shoreline development has resulted in the loss of loon habitat including valuable secluded nesting space. Heavy water traffic disrupts loon nesting, feeding, and rearing of young. Fishermen are not always aware of the damage their carelessness causes to loons. Fishing line, hooks, and sinkers are all dangerous to loons; sometimes loons mistake lead sinkers for pebbles. Water pollution also causes loons difficulty as they must be able to see underwater to fish; polluted lakes do not support fish on which loons depend.