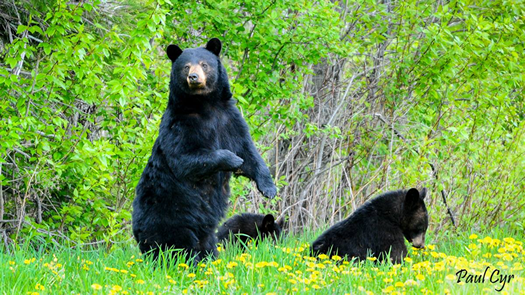 Black Bears are the smallest and most encountered bears in North America among black, brown/grizzly, and polar bears, and are the only bears found in the eastern United States. Maine is lucky enough to have one of the most prosperous black bear populations east of the Mississippi estimated at an excess of 22,000 bears. Black Bears prefer substantial tracts of undisturbed land with mature spruce fir, although adept well to man's development. They can run as fast as 25 miles an hour, and have a superb climbing ability. Adult males average 250 to 600 pounds, females average 100 to 400 pounds. Males measure five to six feet in length from the tip of their nose to the tip of their tail; female's average four to five feet in length.

Unlike grizzly bears, black Bears seldom attack humans. According to the National Center for Statistics, 1980-1983, for every death caused by a black bear, 17 deaths are caused by spiders, 25 deaths caused by (from) snakes, 67 deaths from dogs, and 180 deaths from wasps and bees. On average, fewer than three people are killed every year by the more than 650,000 black bears in America. Surprisingly, Black Bear mothers rarely attack humans when defending their cubs.

Black Bears talk to each other with grunts. When communicating with people, bears blow loudly signaling fear. When cubs communicate distress, they scream; when communicating happiness, they hum. Black bears do not growl. Another way bears communicate is by scratching trees in order to leave their scent to tell others bears that they are there and how they feel.

Black bears do not rely very much on food they kill themselves. It has been reported that animals killed by black bears constitute less than one percent of the bears diet. Nesting birds, penned livestock, and fish are among the bears diet, in addition to blueberries, corn, and honey. The bears use their sense of smell in order to locate desired food. Black bears hibernate as a way of avoiding the scarcity of food brought by the long Maine winters. Bears select dens in which to sleep which include hollowed out trees and caves. Bears make insulated beds for their dens by gathering leaves, twigs, and grass. Bears hibernate alone in their dens except for mothers who sleep with their cubs. During hibernation, usually from December to April, the bears metabolic rates are cut in half and the sleeping heart rate drops to between 8 and 40 beats per minute from between 60 and 90 beats per minute. Black bears are not true hibernators as they sometimes leave the den for short periods of time. It has been reported that less than one percent of bears die during hibernation. In January, new cubs are born weighing less than one pound with a light covering of fir. By the age of 2 to 3 months, cubs are able to leave the den with their mother. The mother has a lot of responsibility as father bears do not help in the raising of the cubs. Sadly nearly half of all newborn cubs die before their first birthday due to starvation. If the bear makes it to their second birthday his chance of survival is increased approximately 90%, after such time most deaths are due to man.