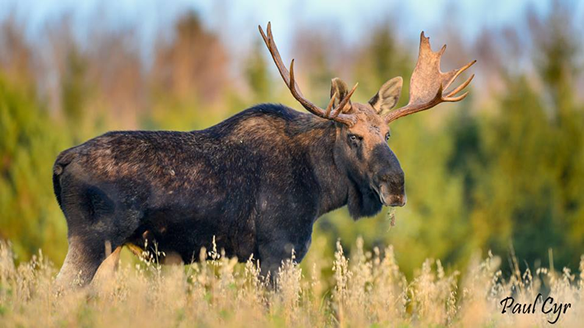 The State of Maine is lucky enough to be one of only a few states in the U.S. and the only eastern state to have a sizeable moose population. Maine is home to the moose sub-species Taiga. In Latin, the moose is called Alces alces. In Maine most moose are found in the northern part of the state.

Male moose called bulls are well recognized for their prominent antlers. For Maine moose the distance from the outside of one antler to the outside of another averages about fifty-five inches. In contrast, the antlers of Alaskan moose have been measured at eighty inches, while moose in New Brunswick, Canada, have measured at seventy inches. The moose's antlers are dropped once a year usually around February and are enjoyed by rodents and other small animals. In April the new antlers begin to grow, covered by a velvet that rubs off in early fall. Female moose do not have antlers.

Bull moose have a life expectancy of seven years while females average eight years. Moose breed from September to early October. Female moose called cows deliver 1 to 2 moose and usually stay with them for one year. Although born a reddish brown color moose gradually change to a dull black color in adulthood.

Moose enjoy a diverse diet. In summer moose like to relax in marshes and ponds in order to avoid black flies and other pests, subsequently enjoying aquatic plants. In winter moose eat tree bark, leaves, twigs, and balsam fir. The long legged moose is able to navigate snowy conditions. Interestingly, moose have no front teeth on their upper jaw.