Maine's rocky coastline is host to more than 60 lighthouses that once guided ships along Maine's coast to safety. The most famous of these is the Portland Head Light, built from 1787-1790, it is Maine's oldest lighthouse. Perched at the edge of scenic Fort Williams Park, just outside of Portland, it is one of Maine's most popular tourist destinations. Its Victorian keeper's cottage was converted into a museum where visitors may view models, paintings and memorabilia from its evolution from hand-lit sentinel to fully-automated beacon. Walking trails line the dramatic coastline around it, offering a perfect spot for viewing the yachts and fishing boats in Portland's busy harbor. (Photograph courtesy of New England Lighthouses: A Virtual Guide ) 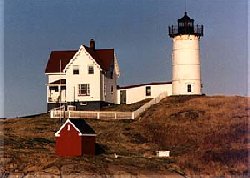 In Maine's Southern region located in York County is Cape Neddick Lighthouse ("Nubble") built in 1879. This lighthouse has a 41-foot white cast-iron conical (cone-shaped) tower. It is located on the summit of Cape Neddick Bubble, a small offshore rocky islet, off Route 1A, York. (Photograph courtesy of New England Lighthouses: A Virtual Guide.)

You can find Pemaquid Point Lighthouse along the Midcoast region of Maine. It was built in 1827. The lighthouse has a 32 foot white fieldstone conical tower. Located in Bristol at the end of Route 130. Surrounded by beautiful beaches, it rises from a shore of volcanic rock. 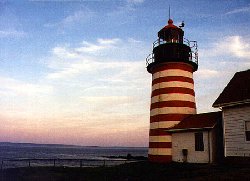 In the Down East region of Maine, West Quoddy Head Light was authorized for construction by Thomas Jefferson and built in 1808. Its 49 foot conical tower is painted in a candy stripe of red and white horizontal stripes. Located in Quoddy Head State Park. West Quoddy Head adjoins a state park by the same name and flashes its beacon from the easternmost point in the United States. (Photograph courtesy of New England Lighthouses: A Virtual Guide.)

These are just a few of the more famous lighthouses in Maine covering different regions of Maine's eastern coast, please be sure to visit New England Lighthouses: A Virtual Guide for a more complete listing and locations of all of Maine's treasured lighthouses.