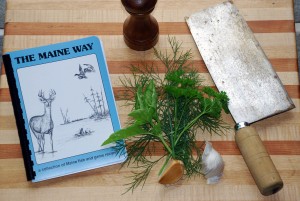 Recently, the Maine Department of Inland Fisheries and Wildlife reprinted the popular cookbook ‘The Maine Way’ – a collection of Maine Fish and Game Recipes. The cookbook was originally authored in 1978 by Judy Marsh and Carole Dyer, wives of game wardens John Marsh and Russ Dyer, and illustrated by game warden John Ford. Judy and Carole felt much of Maine's fish and game wasn't being properly prepared or fully appreciated once it was harvested by Maine hunters and that this was due to the fact there was, at the time, a lack of a convenient cookbook devoted to fish and game recipes.  In the original forward they wrote that game meat and freshwater fish are a great source of protein that equals and often surpasses the quality of conventionally raised meats and that sportsmen should never allow what they take to go to waste.  Their goal for the cookbook was that the recipes not only be delicious but also practical.   The cookbook features dozens of game recipes for big and small game, upland birds and waterfowl, fish and ‘other aquatic delicacies’ that were collected from Maine folks statewide. New to this edition are moose meat recipes, which were once again collected by Judy and Carole, and added to this edition of the book (moose hunting was not legal at the time of the original publication). The Maine Way fish and game cookbook is available in the MDIFW Online Store at www.mefishwildlife.com, in the lobby of the Augusta MDIFW headquarters building, at the Maine Wildlife Park Nature Store in Gray, and will be available at upcoming sportsman shows where the Department has a booth. The Maine Way cookbook is $9.95 and makes an excellent gift for home or camp! VENISON STROGANOFF 1 to 2 lbs. deer meat cut in thin strips 1 medium onion 1 clove garlic 1 tbsp. Worcestershire Sauce 1 can cream of mushroom soup soured cream salt & pepper Saute the onions, mushrooms, garlic and floured strips of meat.  Add Worcestershire Sauce and salt and pepper to taste.  Slowly add the cream of mushroom soup, and when well heated add the soured cream 1 spoonful at a time to taste.  Heat very slow. Serve with noodles -Judy Marsh, West Gardiner
Categories