For many anglers, fish identification is almost like second nature and usually Maine’s fish species are relatively easy to identify, but of course there are a few exceptions. Lately I’ve seen some debate on social media, with folks trying to ID splake and brook trout. It seems every ice fishing season this debate rears its ugly head, and without a lot of experience the two species can sometimes be mistaken for one another.

Let’s start with the basics: What is a splake? Splake are a hatchery hybrid cross between a male brook trout and female lake trout. This hybrid is not produced outside of the hatchery environment because the two parent species spawn in completely different habitats. Splake are genetically stable, and are technically capable of reproducing, but successful wild reproduction is extremely rare, if not practically nonexistent, and has never been documented in Maine. Splake tend to be faster growing than both of its parent species and tend to live longer than brook trout. These qualities make this hybrid trout an effective tool for fish biologists and can create a trout fishery where other native coldwater species are unlikely to thrive. Naturally, a hybrid of any species can be difficult to identify because they take on qualities of both parents, but I am going to give you a few pointers that you can use to identify your catch and hopefully end the debate (for now). 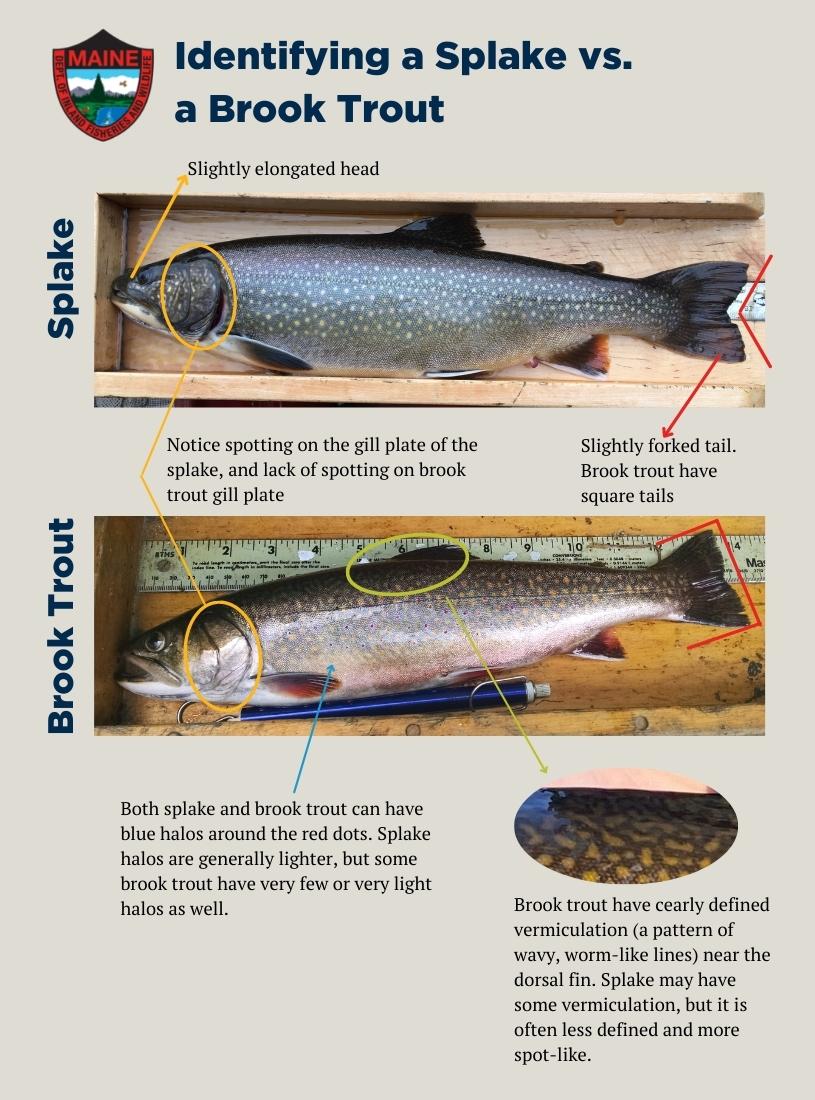 Step 1: Know which species are present in the water

The first step… You need to know what waterbody you are on, an idea on fish species present, and the current regulations. This may seem obvious, but this step is crucial because not knowing what species you may catch, along with not knowing the regulations, could make it easy to misidentify a fish. Also, if there is only splake being stocked into the lake and no brook trout or vice versa, then it makes for an easy ID. You can check the stocking report to see if brook trout, splake, or even both were stocked in that water recently.

Step 2: Look at the tail, spotting, and vermiculation

Tail: When you then catch a fish and scratch your head figuring out whether it’s a splake or brook trout, there are a few things to look for. The most common way to start is the caudal fin or tail. Splake generally will have somewhat of a “forked” tail that they inherit from the lake trout parent, while brook trout tails will tend to be squarer. The deepness of the fork can differ, and you can’t just depend on that alone.
Spotting: The spotting is usually what throws people off the most. Generally, splake get miss identified with brook trout rather than lake trout and that’s due to the spotting. I’ve heard many anglers say, “It’s a splake because it doesn’t have blue halos,” well that’s not an absolute all the time. In many cases, splake can have blue halos around the reddish spots but the halos may be very light compared to a brook trout, of course some brook trout have light halos and, in many cases, just a few of them. The spotting on splake varies greatly from fish to fish but in general it is basically a mixture of lake trout and brook trout spots.
Vermiculation: This is the term for the wavy, wormlike pattern on back of a brook trout or splake, near the dorsal fin.  Brook trout have a clearly defined vermiculation, where splake often have some, but it is often less defined and more spot-like.

Other common traits of splake include spots on the gill plate, a slightly elongated head, and a “rust” colored stomach.

Like I mentioned before, without some experience, identifying a splake from a brook trout can be tricky at first, but hopefully these few indicators will help. And if you ever have the chance to view both species side by side, these differences become even more obvious. Remember, in waters that have both splake and brook trout, the regulations are the same for both species. Legally if you follow the brook trout regulation you can’t break the law on a misidentification. If you ever are unsure of your catch, the best practice is always to release the fish.