What type of bat is in my backyard?

Maine is home to 8 species of bats: big brown; eastern small-footed; hoary; little brown; northern long-eared; red; silver-haired; and tri-colored bats. All eight species are of conservation concern and are protected, with the northern long-eared bat listed on both the Maine (Endangered) and federal (Threatened) endangered species lists, and the little brown (Endangered) and eastern small-footed (Threatened) bats being listed on Maine’s endangered species list. The five other species are considered species of special concern in Maine.

Historically, the two species most commonly seen flying around homes and other anthropogenic structures are big brown and little brown bats. In 2011, a fungus that is infectious and fatal (through a disease called white-nose syndrome) to bats, was first confirmed in Maine, and led to a drastic decline in little brown bat (and other bat) populations. Therefore, the bats that you see flying around your yard are most likely big brown bats. Fortunately for this species, they were not as negatively affected by white-nose syndrome, and remain abundant , particularly in the southern half of Maine.

Why are they showing up suddenly?

If you are finding bats on your property, odds are they have been there longer than you realize! In the eastern US, female big brown bats concentrate into maternity colonies around April. Often this location is the female’s natal roost, meaning the females return to where they were born to give birth to their offspring. The term for this behavior is referred to as, natal philopatry. In urbanized landscapes, rather than using natural roost sites (i.e. tree cavities), their maternity roosts are often found in man-made structures (i.e. barns, attics, crawl spaces, etc.). Between May and July, a female will produce 1-2 offspring, called pups. Around 3 to 5 weeks of age, the pups attempt their first flight, but aren’t completely flight-independent until around 8 to 12 weeks of age! During this time of year (July-August), citizens of Maine begin to report finding bats around their properties during the daytime. Typically, these bats are pups that prematurely or unsuccessfully fledged.

Why is there a bat in my yard during the daytime?

Reasons for a live young bat to be in your yard during the daytime:

Often, if a pup is seen during the day, it has been separated from its mother and will generally wait for their mother to find them. Young bats that attempt to take first flight are just 3 or 4 weeks old, sometimes falling to the ground. In their first flight attempts, they may have hit a window and been stunned, be cold and unable to fly, or experienced stressors from weather or high levels of disturbance. Either way, the mother bat will be looking for her pup; bats form tight bonds and mother bats care for their young through lactation for roughly 4-5.5 weeks, and remain with their pup through the summer, foraging for insects together.

Reasons for a live adult bat to be in your yard during the daytime:

In spring and fall, migrating bats may temporarily roost outside on window screens, fence posts, piles of lumber, and other unlikely places. If a bat is seen roosting outside during daylight hours, leave it alone. It will probably be gone the following morning. If the bat is grounded or in an unsafe location, it may require assistance. The energy demand of raising pups can severely affect adult bats and can even cause them to die during this time of year. Mother bats often carry their young when they fly for the first few weeks, which is an exhausting task with a pup that can weigh up to a third of their mother’s body weight when born. Additionally, mother bats need to feed more this time of the year once a pup is born to meet the energic demands of lactation (feeding her young milk). If a bat becomes sick or injured, it is possible it has become too tired to return to the roost and is resting in your yard.

Why you may want to help if the bat is in a low area:

Natural predators of bats range from snakes, owls, raccoons, to feral cats and even bullfrogs, making it inherently dangerous for a bat to be grounded. Follow the guidelines below to move a live bat carefully to a safer area, or to properly and safely dispose of a dead bat that is found.

What should I do if I find a bat?

If you have found a bat grounded in your yard at any time, there are a number of threats that pose an immediate risk to its survival and actions should be taken to move the bat.

If you find a bat that is alive:

Be sure the location the bat is released in has the following: (1) high ground (i.e. porch railing, tree branch, or other places elevated off the ground) a (2) shaded area, 3) limited disturbances. Sometimes bats found in these situations just need some time to rest and will fly off during the night. If by chance the bat is still there in the morning, it is recommended to reach out to a bat rehabilitation facility. Maine offers four bat rehab facilities listed at the end of this blog.

If you find a bat that is dead:

Bats can die for a number of reasons, such as from predators, overheating in their roost, or other threats. Parasites, such as worms, mites, and insects can cause death and are more easily transmitted among other bats while roosting in colonies. Human-induced threats, such as environmental pollutants like pesticides, can enter their body through food (insects) and water sources, causing toxins to accumulate in their body leading to reproductive failure and potentially death. Lastly, disease such as rabies can cause mortality in bats. However, rabies in big brown bats is rare. Rabies is spread when the saliva of an infected animal enters the body through a bite or scratch, or makes contact with the eyes, nose, mouth, or break in the skin. There is little risk of contracting rabies from a bat as long as you exercise caution. People cannot get rabies from touching bat droppings, blood, urine, or fur. Nonetheless, you should always take precautions and wear proper protective equipment (PPE) whenever handling a bat. Maine only tests bats for rabies if there is an exposure risk to people or pets from a bite or scratch, or if the bat is found in a room with a person (for example a baby) that can’t inform others that they weren’t bitten. 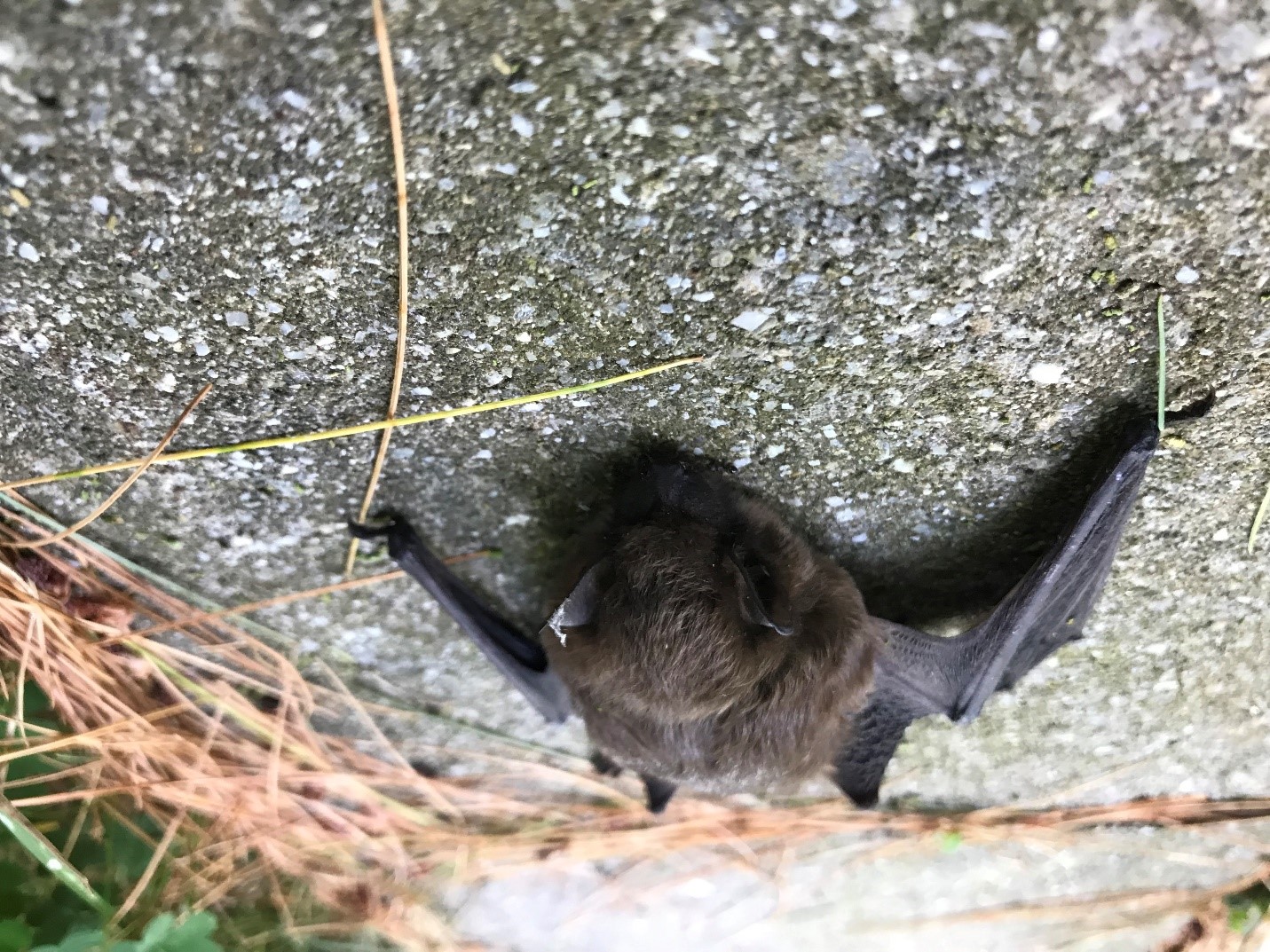 Properly disposing of a dead bat:

Use Personal Protective Equipment (PPE) such as latex gloves to dispose of the bat. Place both the bat and the gloves into plastic bag and spray it with disinfectant. Close the bag securely and dispose of it with your garbage.

In a situation where you find 10 or more bats dead in one year, please call your local MDIFW regional office as soon as possible so a staff member can determine if additional action is needed.

If you do not want to handle the bat yourself, locate and call a local Animal Damage Control Agent (ADC Agent).

If a bat has not left an area after a day or so, it may need help. The following are professional Wildlife Rehabilitators that work with bats: