Fired Up about Conservation

Learning and Burning in Maine 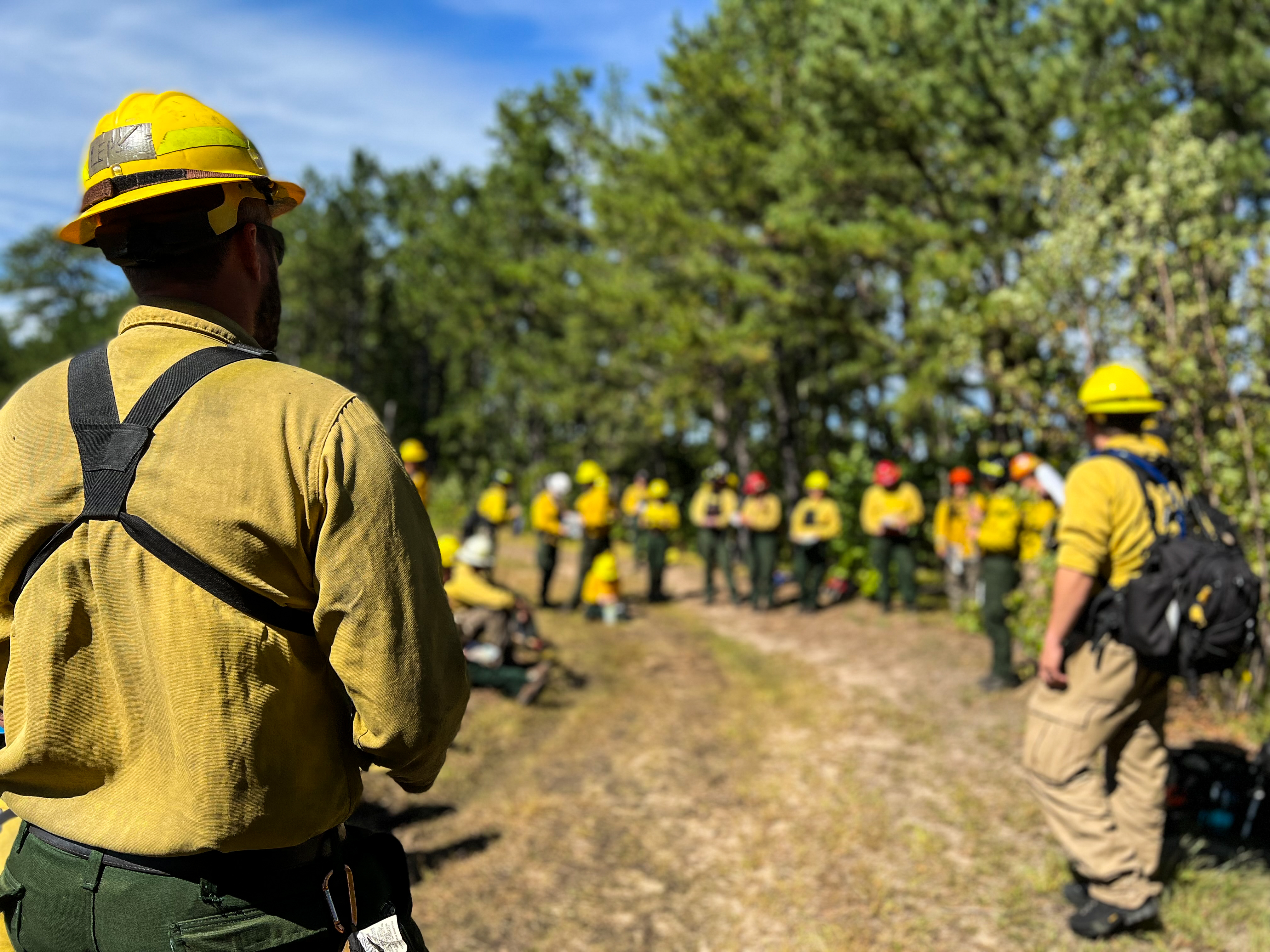 Fired Up about Conservation

All it takes is a brief look at Maine’s historic fires of 1947 to know that uncontrolled wildfires can be incredibly devastating. But decades of suppressing all natural fires has proven to have a drastic negative effect on biodiversity and severely elevates future wildfire risk. Prescribed fires strike the balance by mimicking low-intensity natural fire in a meticulously planned and controlled way to achieve both ecological health and wildfire resiliency.

A primary goal of the State-owned Wildlife Management Areas (WMAs) is to provide a statewide, ecologically based system of land holdings for the protection and enhancement of important wildlife habitats. They also serve as areas for the public to recreate, view wildlife, and learn about wildlife and habitat management techniques.

Kennebunk Plains is a State-owned WMA managed for important wildlife habitat to include rare sandplain grassland, pitch pine/scrub oak communities, and red maple alluvial swamp forests. The WMA is managed jointly with the Nature Conservancy, a leader in the use of fire as a management tool. Prescribed burns are tactically designed with two main objectives: restore ecosystem function and decrease uncontrollable wildfire risk.

The centerpiece of the Kennebunk Plains Wildlife Management Area is the state's largest sandplain grassland, 775 acres previously managed as a commercial blueberry farm until acquisition by MDIFW in 1990. The WMA is home to State Endangered grasshopper sparrows and northern black racers as well as several rare plants, Species of Greatest Conservation Need, and State Threatened Species. Recovery of these species would be impossible without the active management of their unique habitats at Kennebunk Plains, habitats that depends on fire.

Flames Sustain the Plains in Maine

Kennebunk Plains is primarily comprised of fire tolerant plant species including the rare Northern blazing star and lowbush blueberries which have historically benefitted from the space and nutrient release created by occasional natural fire. Without low-intensity prescribed fire, the grasslands would be quickly taken over by pines, birch, oak, and cherry, and lose the ability to support specialized grassland wildlife such as upland sandpipers.

Looking at a snapshot in time during a single burn, the process appears to do more harm than good, but looking at the bigger picture reveals that invasive species are knocked down and over time, carefully timed burns breathe nutrients, space, and new life into the ecosystem. The rejuvenation becomes obvious when the area fills with blooms following a burn, growing stronger and healthier than before. Concurrently, proactively burning these areas reduces risk of uncontrollable wildfires by eliminating the overgrowth of fuels and keeps our surrounding communities safe. 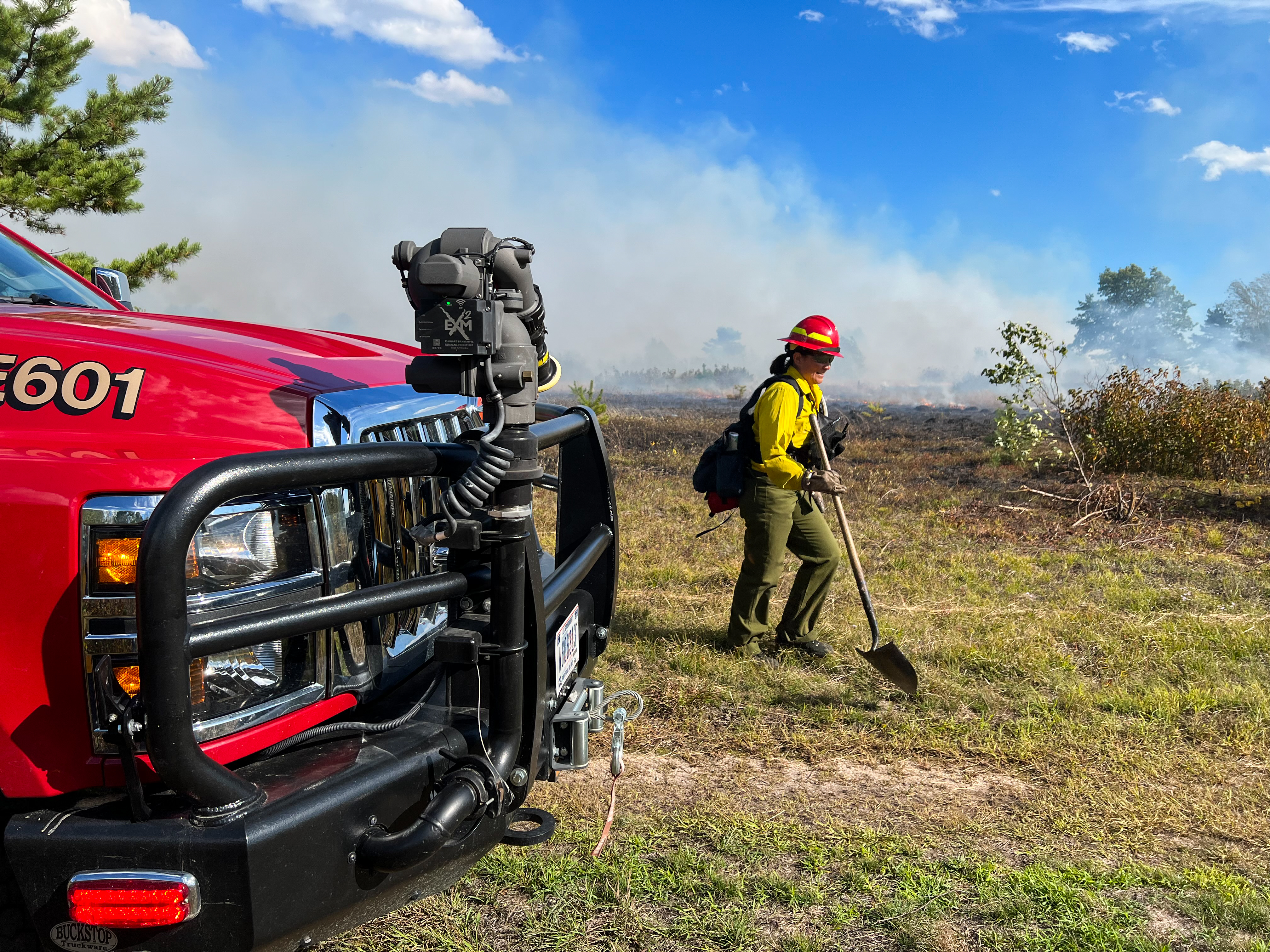 In addition to organizing a nationwide training event, massive amounts of planning go into preparing for a burn. Ecological factors, social factors, resource availability, and safety of wildlife, burn crew, and local communities all need to be considered when choosing the location, size, shape, type, and timing of a burn. Once all the details have been planned, the crew waits for a weather window and the go ahead to burn.

The high level of professional risk management and organization is evident on the site of a prescribed burn. The day begins with a pre-burn briefing which includes a review of safety precautions, roles, contingency plans, resource checklists, detailed burn unit (area to be burned) description, treatment plan, objectives, and the all-important weather update. A burn can be called off even moments before it begins if environmental variables do not remain within defined safety parameters.

Everyone on site is prepared for a specific job. Running the show is the Incident Commander. Next in charge is the Burn Boss who makes all the critical on-the-ground calls throughout the burn. They are in constant radio communication with leaders of North and South Holding, the Firing Boss, and Fire Effect Monitors (FEMO). All are equipped with tools specific to their job as well as personal protective equipment (PPE) including hard hats, yellow fire resistant Nomex shirts, and leather gloves. In case of emergency, everyone even carries a portable fire shelter. 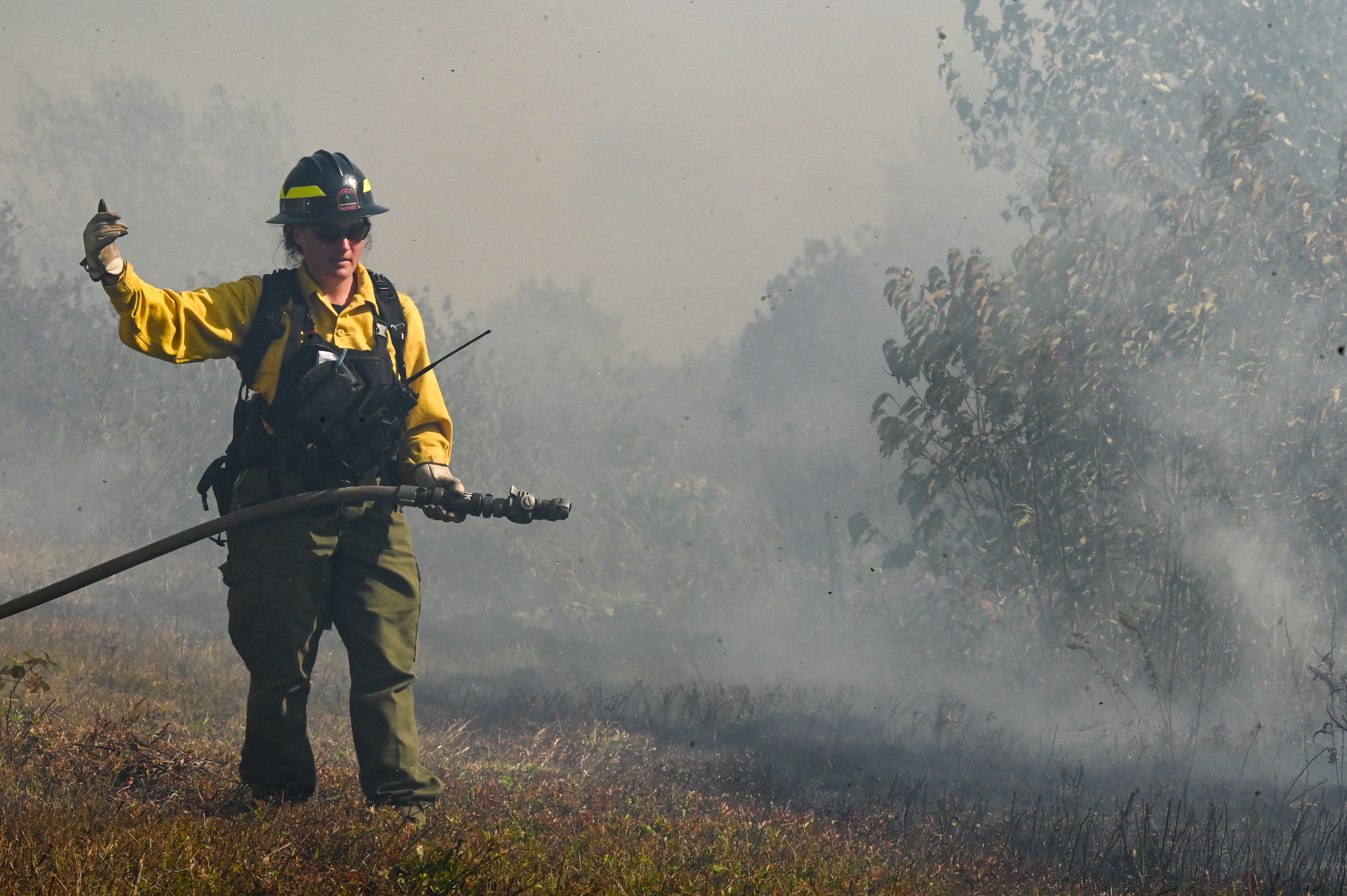 Watching smoke billowing up from 80 acres of grassland can be a bit unnerving, but when the cause is the execution of a prescribed fire treatment by highly trained professionals, there’s nothing to worry about. Unlike the battle for control in the chaotic event of a wildfire, prescribed burns are more like strategic games of chess with a calculated, patient, and conservative approach.

Prior to the burn, permits were obtained, area fire departments were notified, and local communities were educated about the burn, so they’d know what to expect. The day of the burn, members of the crew were specifically assigned to immerse themselves into surrounding communities, evaluating smoke conditions, and answering questions.

With the first tilt of a drip torch, a gas-diesel mixture ignites, and the first flames of the day begin to creep through the low vegetation. This is the start of the test fire. The temperature and behavior of the test fire will be measured and closely monitored along with the weather. Even with flames now on the ground, the Burn Boss can call off the burn at any point during the test. Satisfied with the results after about an hour-long test burn, the team commits to completing the burn of the entire unit. 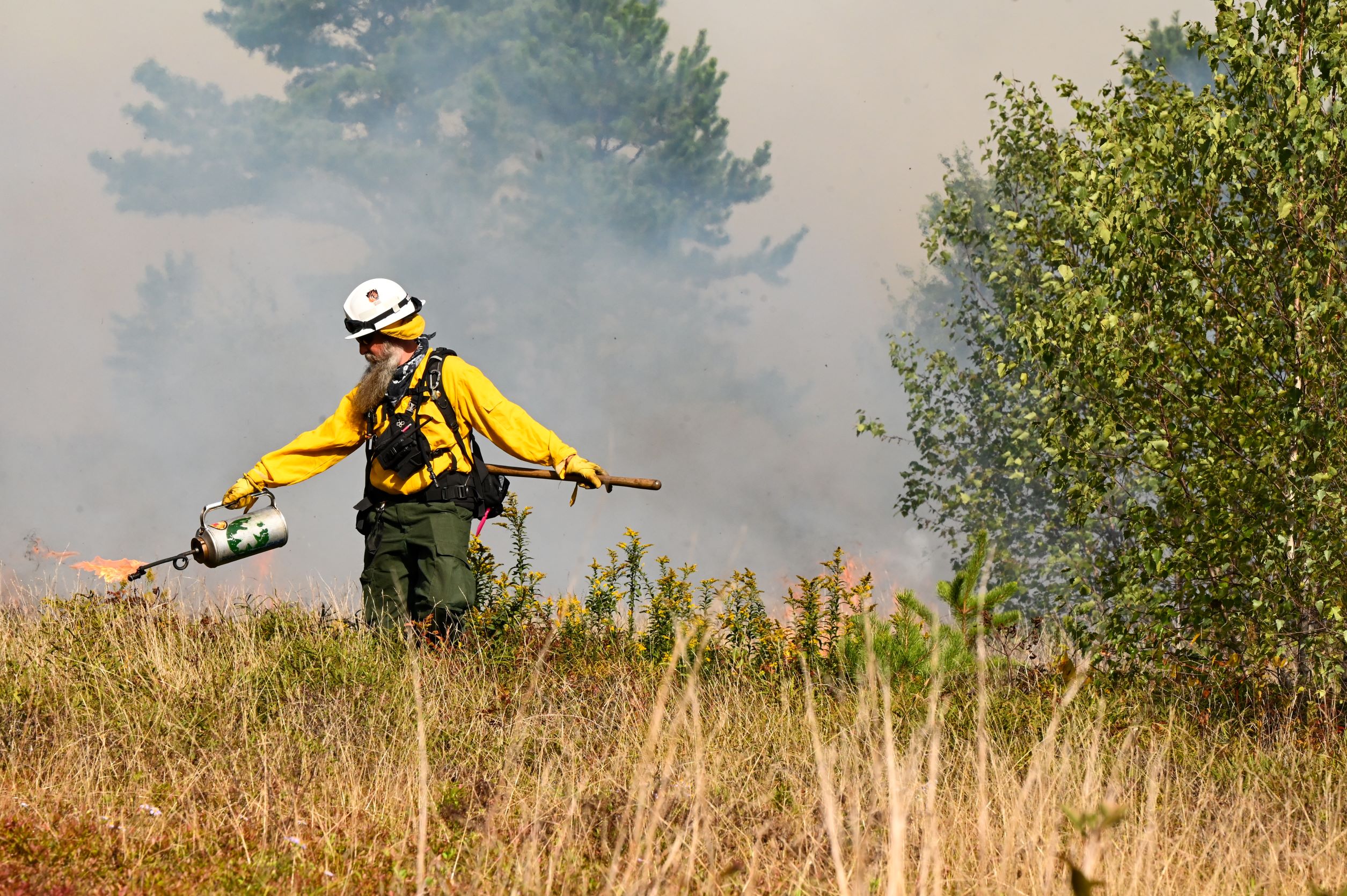 The movement of the fire is surprisingly precise. With their knowledge of fire behavior, weather, and the components of the unit, the crew is in control. With the wind direction in mind, a firing team works diligently within the unit, igniting vegetation in specific patterns to guide the fire in the intended direction. 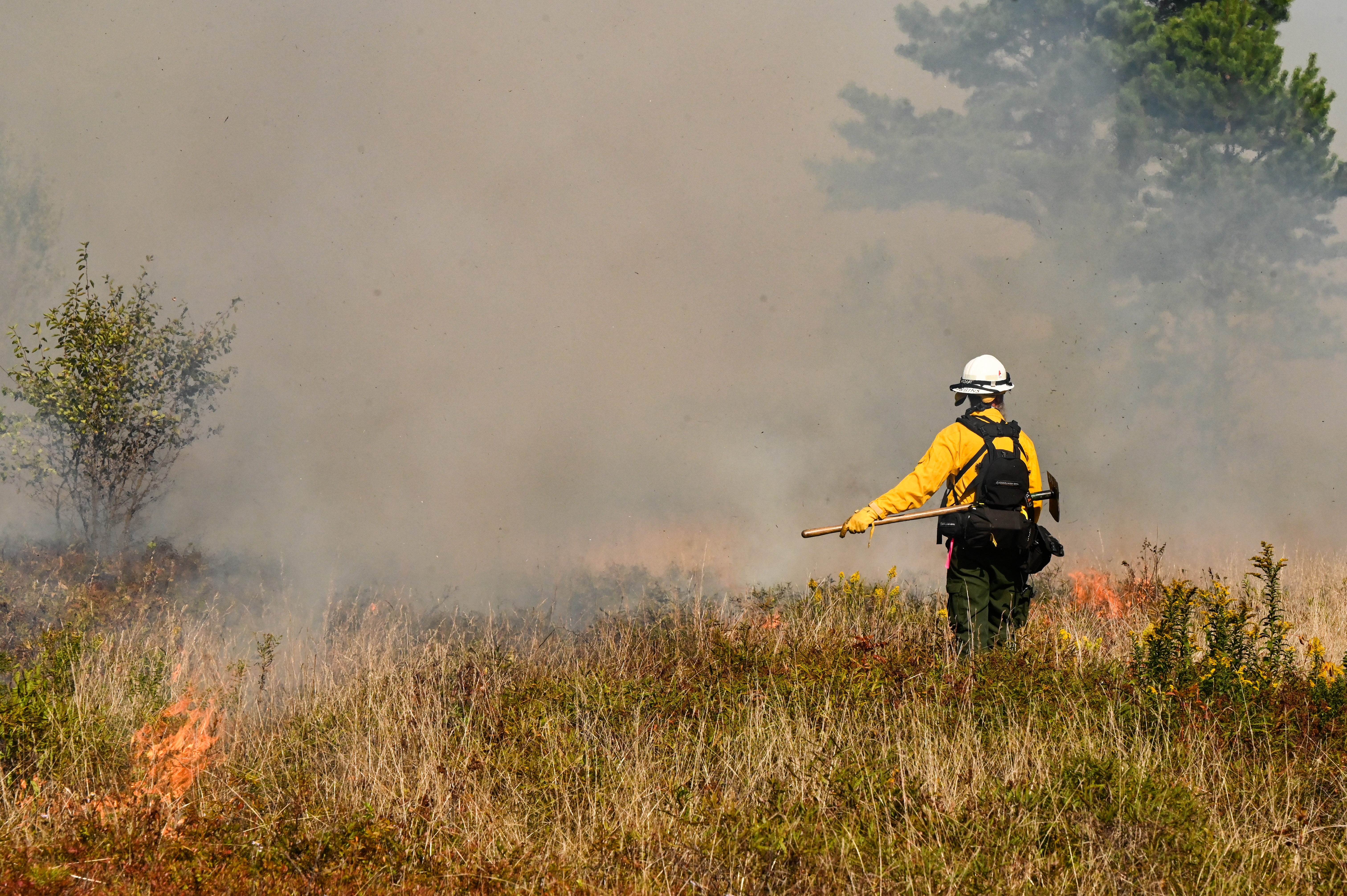 North and South Holding are teams charged with maintaining the strict flanks of the unit, some on UTVs, others on foot. They expertly hold the line against unruly sparks and spot fires using an assortment of hand tools and hoses from fire engines following along with hundreds of gallons of water on board. It is not uncommon to see drip torches igniting vegetation right next to hoses defining steadfast limits for the flame like a rigged battle of the elements.

It’s not long before the classic catcher’s mitt shape of a burn is formed by the two teams steadily working away from each other around opposite sides of the unit. The fire is low and the smoke, made mostly of water vapor, is white. The dark contrast of the charred earth behind the fire fortifies the fire break as the fire pushes wider across the remainder of the unit. 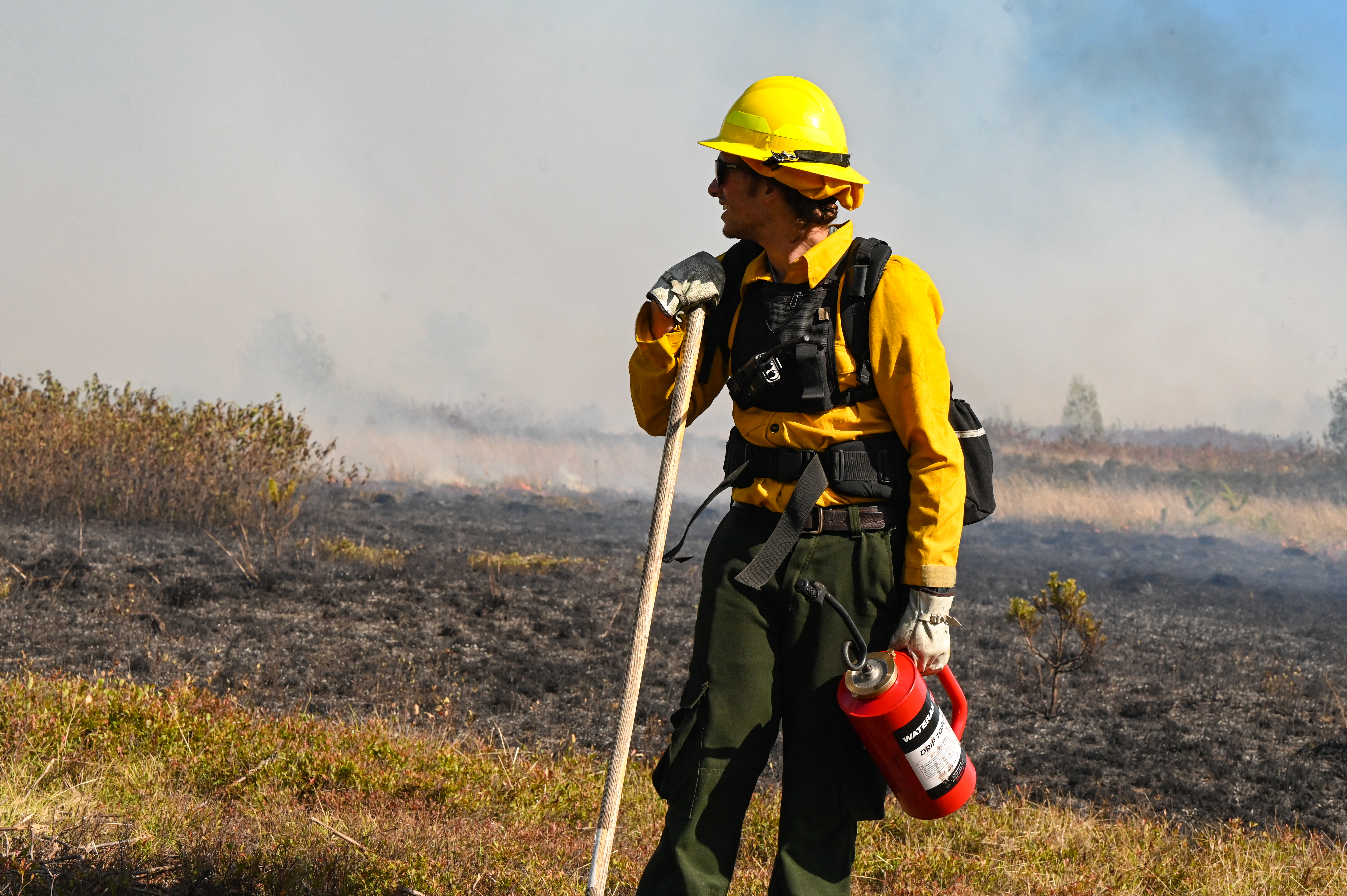 Fire Effects Monitors continuously study the behavior of the fire and document weather readings which are reported to the Burn Boss every half hour. A small handheld device called a Kestrel measures an enormous number of variables such as wind speed, wind direction, relative humidity, and temperature, all of which can affect fire behavior. Working on the sidelines of the unit without the excitement of a drip torch in hand, the job of weather monitor is a less glorified yet critically important role.

Several hours into the burn, North and South Holding converge on the far side of the unit. The unit now has a substantial burned fire break around the entire perimeter. Once the center of the unit has all burned, the last tasks for the crew are mop-up, patrol, and an after-action review. 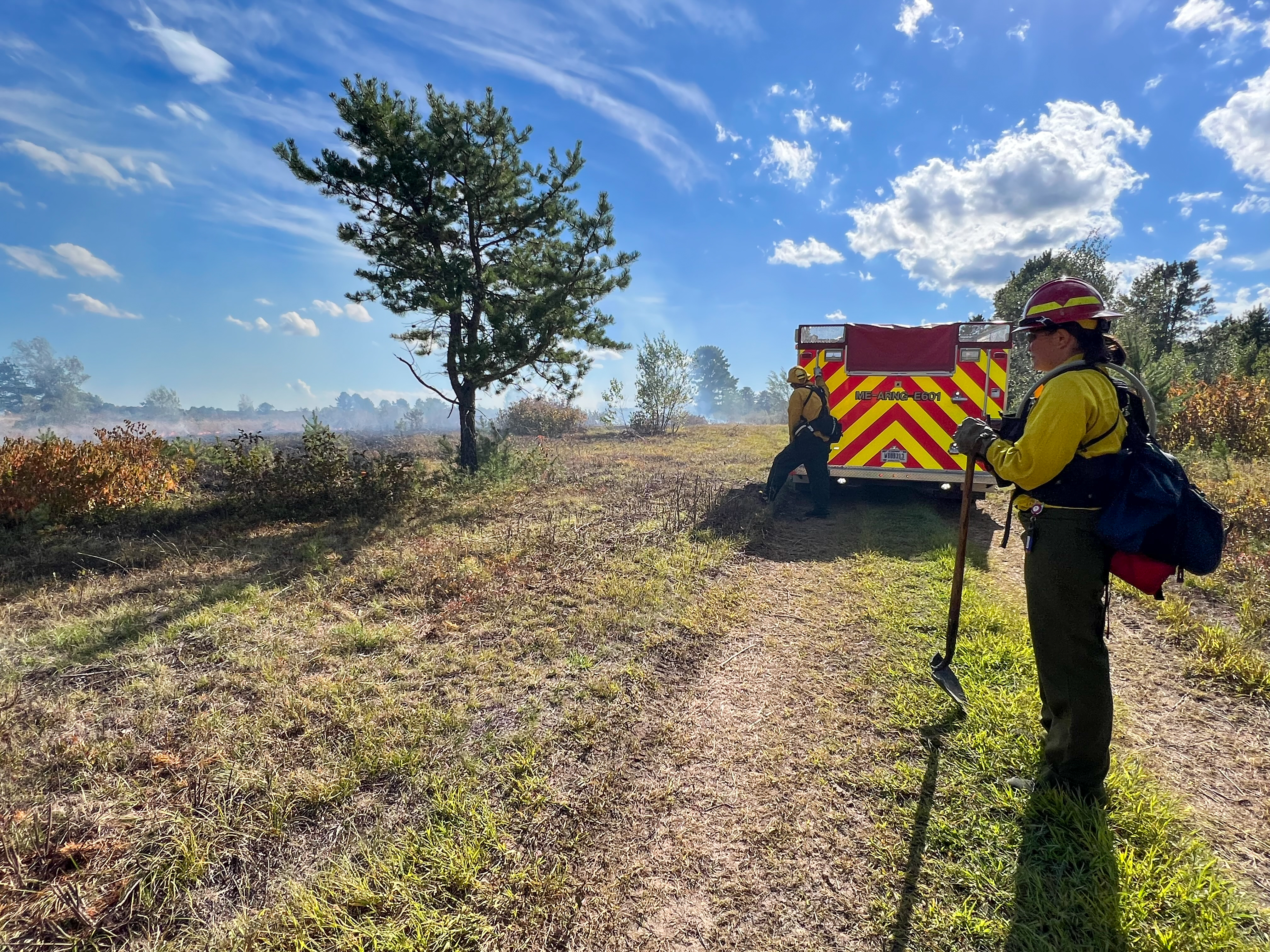 Any lingering burning material within the unit is extinguished, and the perimeter is patrolled for any flare-ups and residual hot spots to be suppressed. A few crew members remain on site until there is no evidence to suggest the fire isn’t out for good. The whole crew participates in a comprehensive review of the day’s work to discuss what went well, where improvements are needed, and examine any potential need for adjustments in the next burn.

With the smoke cleared, and the crew ready for a good night’s sleep, Kennebunk Plains has one more unit ready for the rich regrowth of a newly restored sandplain grassland, and the welcoming home of the delicate species of wildlife that depend on them. 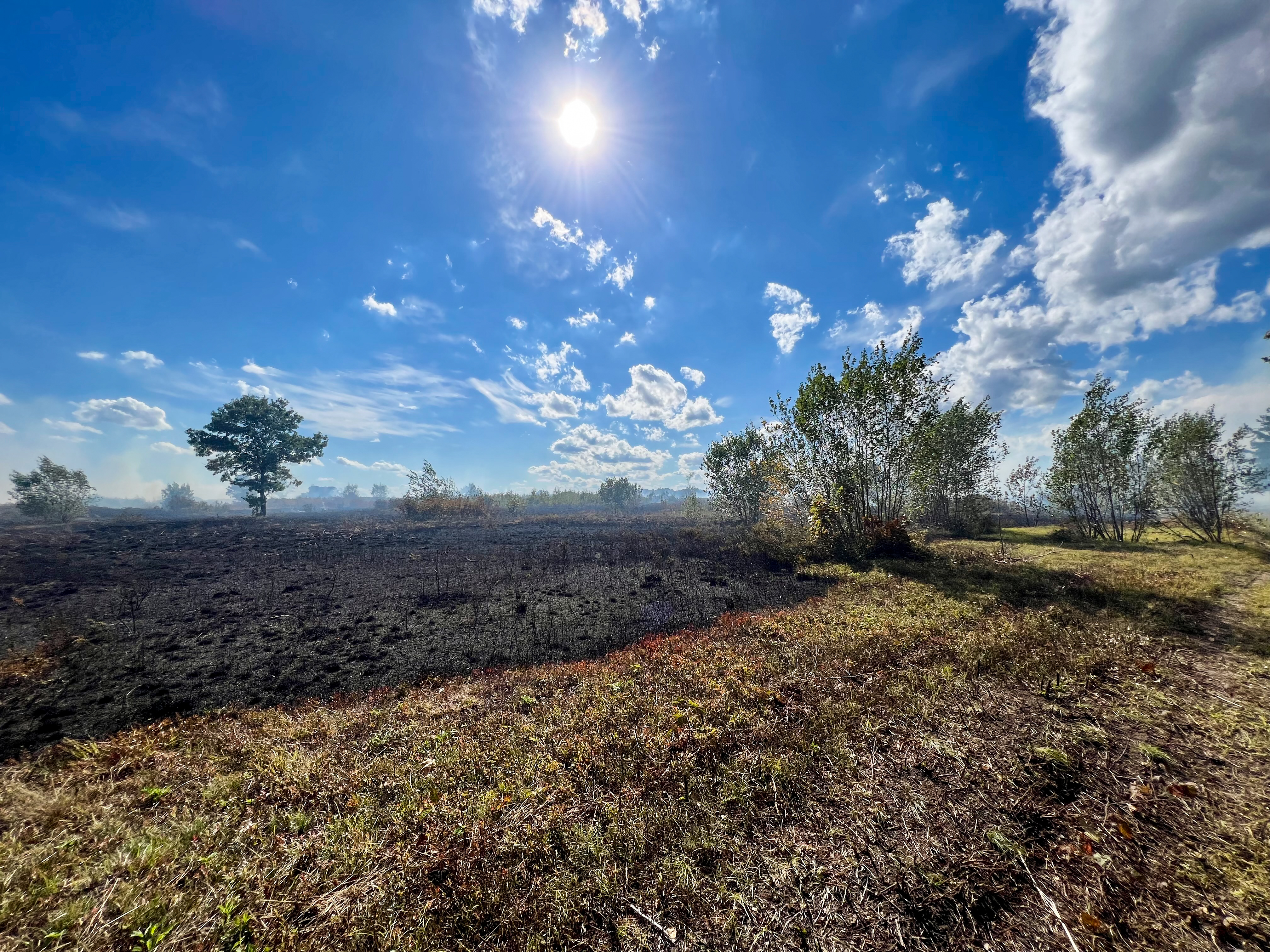