Enduring the elements is second nature to biologists. Extreme temperatures, odd hours, clouds of mosquitos and black flies; the commitment to gathering data on the health, range, or abundance of species is astounding. But a day in the field is full of excitement when a focal species is found, confirming its presence in an area, or expanding knowledge of its home range, life history, or habitat preference. 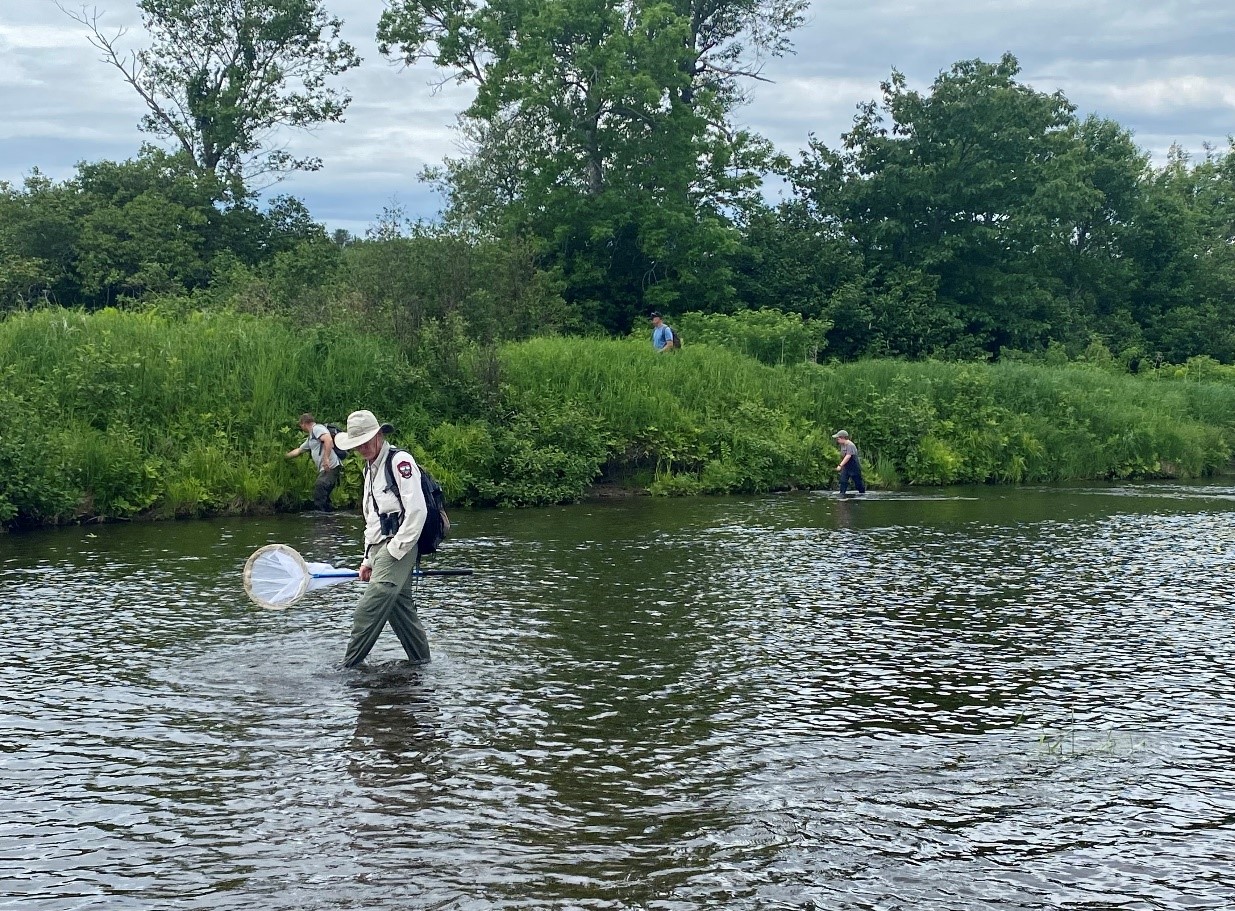 As the first hour-long wood turtle survey was conducted, the kilometer of wading through water and shrubbery turned up a ring-necked snake, a large bullfrog, and even a Northern leopard frog, but no wood turtles. It wasn’t until the second survey that the small, dome shaped shell with intricate scutes was found – nestled into the grass, hidden by towering ostrich ferns and shrubbery, only a year old and about two inches in diameter. 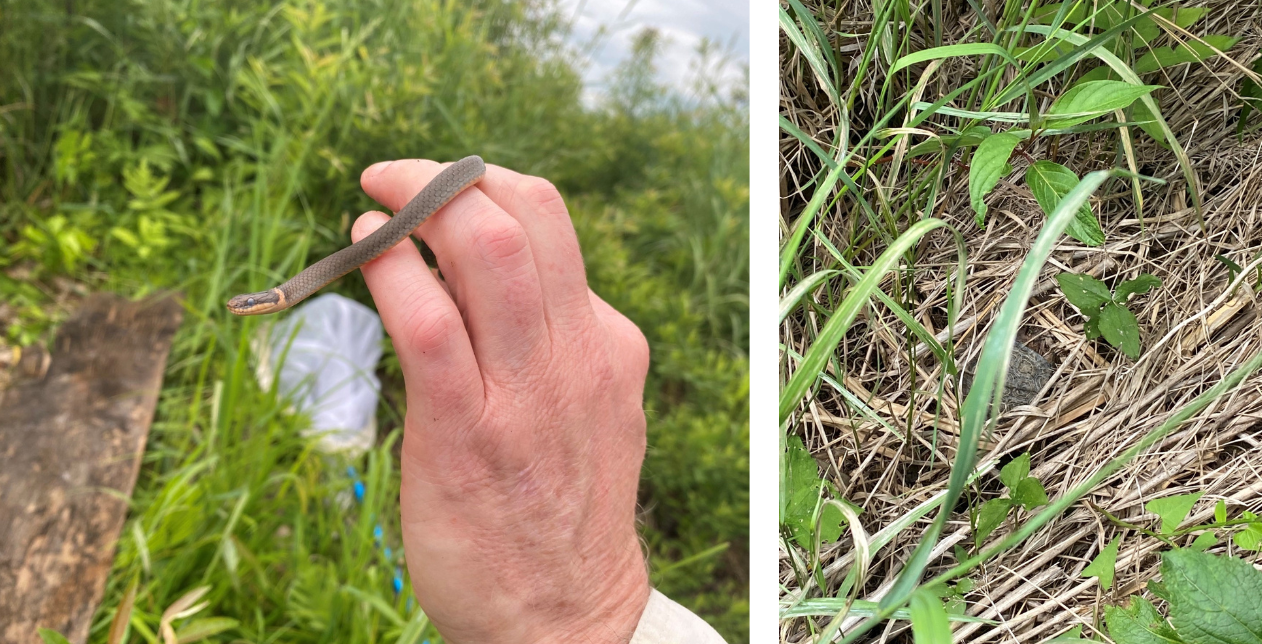 Fresh water turtles and tortoises are declining worldwide as a result of varying threats. Agricultural and urban development, habitat fragmentation, degradation, and loss, all impede these reptiles’ ability to utilize habitat as safely and effectively as they once did.  Road mortality, changes in climate and even the illegal pet trade are relatively novel factors that implicate these sensitive species of turtles, and on top of it, wood turtles have long life spans, delayed sexual maturity, and relatively small clutch sizes – meaning they typically don’t lay eggs until they are 12 to 16 years of age, and only have seven to 11 eggs at a time. Additionally, this species of turtle has low nesting frequencies, and their eggs experience high levels of nest predation and juvenile mortality rates. While biologists are aware of the many factors that negatively impact wood turtle populations, there is little to no evidence that indicates the severity of each threat and the ultimate implications at population levels. Often, the greatest challenge for acquiring this information is the difficulty of sampling and the low detectability, making sample sizes slight and hard to apply beyond a small area.

From 2012 to 2017, in an effort to conduct more widespread wood turtle surveys, a collaborative effort between state, federal, academic, and nonprofit biologists, selected survey locations of known populations, suitable habitat, or data-deficient areas from Virginia and West Virginia up through Maine. Searching along stretches of streams and rivers, biologists conducted three surveys per site per year in the spring – the time when wood turtles emerge from in-stream overwintering. This same approach was applied on a stream in Maine on this June day. During the months of May and June, biologists from the Maine Department of Inland Fisheries and Wildlife (MDIFW) conducted surveys in areas that had known suitable habitat and a known population to verify and track occurrences of the Species of Concern, improve knowledge of habitat use and home range, and effectively map them for conservation planning. 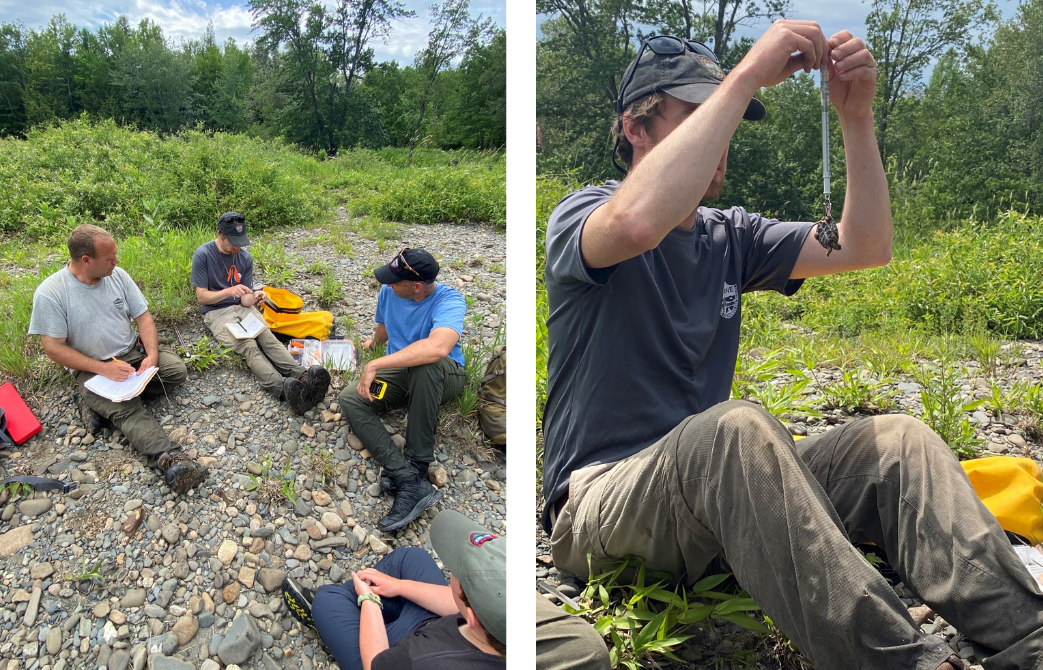 In the second survey of the day, three wood turtles were visually located. One just a year of age, one three to four years of age, and one seven to eight years of age. Age can be determined by counting the number of rings (or annuli) in the abdominal section on the plastron (under side of a turtle’s shell), similar to counting tree rings. Each turtle’s carapace and plastron have uniquely shaped and colored markings, making it easier to recognize them later with photo identification. Each turtle had its capture site located with GPS points, was weighed, measured with calipers, and when large enough, had their shells notched with a specific numbering system to help identify the individual if captured in future years. Biologists conduct a rapid assessment (RA) by visiting a site three times to count individual turtles for an analysis of abundance. For more long-term (LT) data, biologist visit a site a minimum of six times and mark and recapture enough turtles to generation a population estimate. This data provides insight to the demographics of the population, including recruitment (which is how many turtles make it to adulthood). This provides MDIFW with a better understanding of the home range of wood turtles, the relative size of the populations, and clearly track whether the populations are increasing, decreasing, or remaining stable. 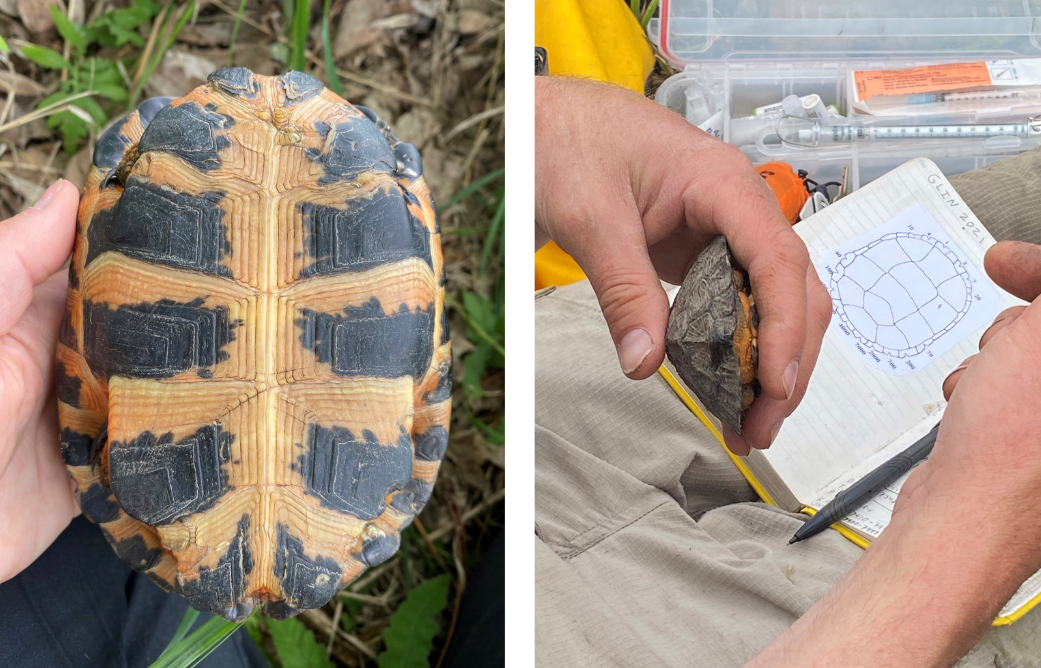 If you are a turtle lover and are interested in helping turtle populations in Maine, always leave a turtle where you found it. If you find it on the road, carefully bring it to the side of the road it was heading towards. If you post a picture of turtle photos onto social media, protect them by not mentioning their location! Lastly, If you’d like to contribute important data to MDIFW, just submit any turtle sighting you have to The Maine Amphibians and Reptile Atlas Project (MARAP) here! To learn more about the MARAP project and its goals, read here. 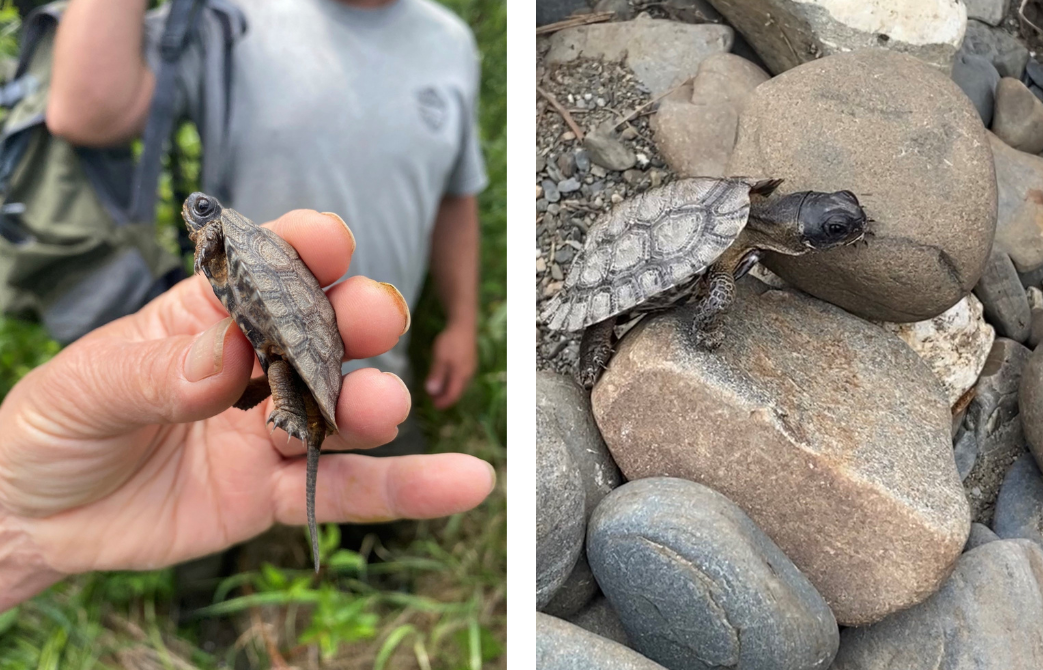