Moose survival study continues with a focus on winter tick

For five years, the Maine Department of Inland Fisheries and Wildlife has been conducting aerial surveys to better understand the health of Maine’s moose population. This aerial survey data is combined with reproductive data from female moose (ovaries) and age data from moose teeth (removed at registration stations during hunting season) to give biologists more information about Maine’s moose population than ever before. 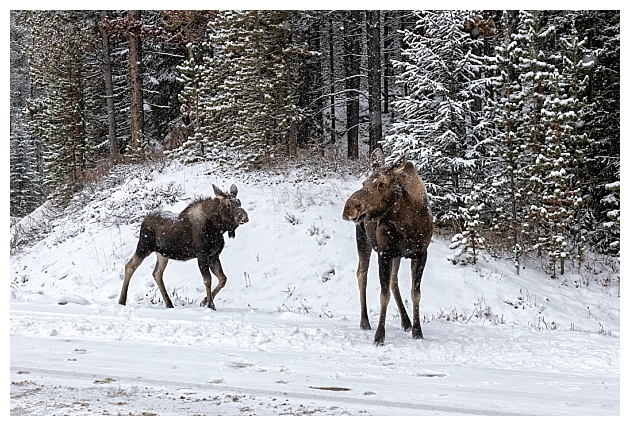 The size of Maine’s moose population fluctuates in response to many factors, including calf birth and adult survival rates. MDIFW has been closely examining these rates as well as mortality sources in cooperation and collaboration with the University of New Hampshire, New Hampshire Fish and Game, and the University of Maine-Animal Health Lab. The study began in the winter of 2014 and was designed to continue for a minimum of five years. MDIFW launched the study in western Maine (WMD 8), and in 2016, added a second study area in northern Maine (WMD 2). Since 2014, we have captured 475 moose by tracking the animals by helicopter, net capturing them, and fitting them with a GPS collar. These collars enable MDIFW Moose Biologist Lee Kantar to track moose locations and movements over time, and to be notified via text/email message if a moose dies so we can understand the cause.

MDIFW biologists observe adult cows each spring and summer to determine reproduction and survival of calves. For each collared moose, biologists collect blood, measure parasite loads, body condition, and count winter tick loads. This information provides our researchers with an in-depth look at moose health, including the impact of parasites on survival and reproduction.

In the coming months, Lee Kantar along with Native Range Wildlife Capture Services will be concluding the initial five-year survival study, collaring 35 calves in district 2 and 35 calves in district 8. As a continuation of this study and to better understand the impact the winter tick has on Maine’s calf moose population, 60 calves will be collared in district 4. It has been well documented that winter tick significantly impacts the survival of calves and may impact pregnant cows during the end of their pregnancy, causing extra stress on body condition due to blood loss. This increase in winter tick is a consequence of the changing climate, resulting in milder winters and creating a greater opportunity for tick survival. With parasites and disease, higher moose population leads to greater chance of transfer, ultimately causing more death. Since calves have two critical periods in their lives to ensure survival, it is of high priority for MDIFW to find ways to help improve moose health. For this reason, the agency is considering methods of selectively lowering the moose population in certain parts of the state to decrease the chance for parasite and disease transfer, eventually leading to a healthier and higher quality population.

The cooperation of hunters is an invaluable contribution to the studies that MDIFW conducts. Ovary submission will be required from female cows during harvesting season so biologists can continue to evaluate ovulation and reproductive rates, two critical pieces of information to monitor population growth and decline. With the continued support of  hunters we can ensure the protection of Maine’s moose population.