Each year Maine Department of Inland Fisheries and Wildlife and other agencies such as the Maine Department of Environmental Protection respond to multiple reports of “Fish Kills” or the unexpected or sudden appearance of dead fish over a short period of time. Most of the time these events are the cause of natural phenomenon and even though they can involve hundreds of fish in a small water, the loss typically only represents a small fraction of the total fish population and the long-term impact to the fishery is minimal. Nonetheless, when they occur, MDIFW strives to investigate when freshwater fish are involved.  (For more information on fish kills please read this blog article from 2020 titled When to be Concerned About Finding Dead Fish on Maine’s Lakes, Ponds, and Rivers this Summer.)

The role of stress in fish kills

Although natural fish kills have a wide variety of causes, stress, in one form or another, is a common denominator.  Stress from excessively high temperatures, low dissolved oxygen, acidic pH, spawning physiology and behavior, algae blooms, forage quality, over-population, predation, parasite and pathogen abundance can cause significant stress - which occasionally can be severe enough to suppress immune function and behavior. Although immune suppression makes fish vulnerable to disease, some stressors can result in behavioral changes that make them more vulnerable to contracting the agents of disease.  Behavioral changes that result in fish to congregate as they seek thermal refuge or waters of higher oxygen content can easily create an environment wherein parasites and pathogens can proliferate and spread within a population.  As some fish species are more susceptible to various stressors at certain life-stages and to specific parasites and pathogens, it is not uncommon to see fish kills be predominantly comprised of a single species. When a fish kill is observed as such, it is a strong indicator that the fish kill is due to natural phenomenon rather than due to more concerning ecological causes or other causes due to human activity.

The recent fish kill of adult largemouth bass seen in Webber Pond is an example of a fish kill with natural causes exacerbated by stressors of seasonally low dissolved oxygen, excessive levels of common protozoan parasites and a pathogen specifically harmful to just one species of fish.  Fish overpopulation combined with seasonally low dissolved oxygen, which is common in eutrophic systems, can cause fish to congregate in areas where cooler or better oxygenated water may exist.  During such periods of stress and crowding, protozoan parasites can easily spread amongst individuals within the population.  Newly parasitized fish may not necessarily be infected at high enough levels to result in significant near-term impairment but can instead live, and even thrive, in a parasitized state until warming waters the next season cause the parasite to proliferate as reproductive rates increase and other stressors such as spawning physiology create the right set of conditions to cause a small fish kill - an unfortunate perfect storm of events.

As part of MDIFW’s investigation of the recent fish kill event at Webber Pond, largemouth bass specimens were brought to the MDIFW Fish Health Laboratory in Augusta for examination and necropsy.  Examination of skin and gills under a microscope immediately detected the presence of large numbers of protozoan parasites, particularly a Chilodonella species, at levels more than sufficient to cause a small kill.

Photos below (left to right): Large numbers of Chilodonella on largemouth bass gills, close-up Chilodonella, and Apiosoma on gills. 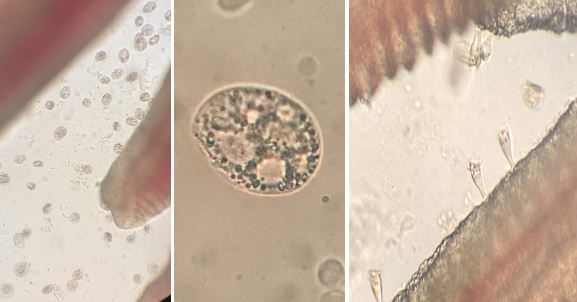 In addition, samples were examined to determine if bacterial or viral infection could be a factor.   Bacteriology, taken from kidney stabs from each fish resulted in no growth, indicating no involvement of a systemic bacterial infection. However, virology, which was conducted on pooled kidney, heart, and swim bladder tissue, detected the presence of a virus in one of the two diagnostic pools, indicating a possible involvement in mortality of some, but not all, fish. The presumptive positive virus sample was sent to Kennebec River Biosciences for further analysis, confirmation, and identification.  The results confirmed MDIFW Fish Health Lab’s initial findings of a virus being present and determined the identity to be that of Largemouth Bass Virus (LMBV). This detection of Largemouth Bass Virus is the first detection in the State of Maine.

The Largemouth Bass Virus, although detected in other species within the centrarchid family (which includes sunfish and bass), is only known to cause disease in largemouth bass. Its pathogenicity and ability to cause disease in largemouth bass is thought to require sustained temperatures in the mid 80’s and higher. For this reason, the virus is less likely to be noticed and detected in northern states such as Maine where water temperatures typically run cooler and rarely get that warm.  The good news is this virus is not expected to be a noteworthy issue for largemouth bass populations in Maine but could occasionally be an additional stressor in certain waters during particular periods of time.

Largemouth Bass Virus has likely been in Maine for many years, but the risk of it spreading can be reduced

While this is the first confirmed detection of Largemouth Bass Virus in Maine, it is prevalent in central and eastern United States, particularly in the south. It has been thought to likely be present elsewhere in Maine but is yet to be detected. This virus is one that can easily be transported on fishing gear that has not been dried and in standing water in boats that have not been properly drained, rinsed, and dried prior to launching into Maine waters.  Practicing “Clean, Drain, and Dry” techniques and inspecting boats, motors, trailers, and gear to remove potential aquatic invaders are important actions to help prevent the spread of aquatic invasive species, Largemouth Bass Virus, and other aquatic pathogens.

The detection of Largemouth Bass Virus in the Webber Pond largemouth bass indicates that it may be a factor in the kill but as temperatures of the pond were not conducive for the virus to cause mortality, and as it was not found in all bass involved in the fish kill, the virus is not thought to be a primary cause.  High levels of stress from parasitization can cause dormant viral infections to suddenly increase to a more detectible level, and this is assumed to be the case with its detection in Webber Pond largemouth bass. It is likely that Largemouth Bass Virus has been in Webber Pond for some time.  It is also likely that it will be present there forever. Fortunately, data from other states and the temperature limitations here in Maine, indicate that the long-term impact to the overall fishery of the pond should be minimal.