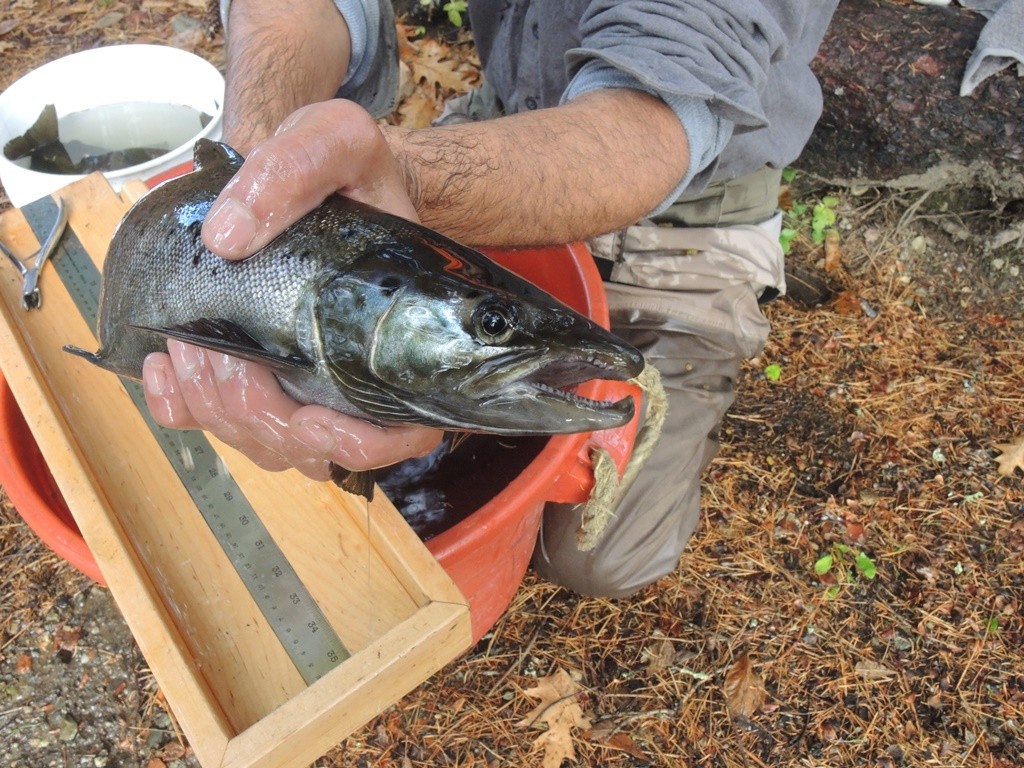 Lake Auburn supports one of the more popular coldwater fisheries in southern Maine, boasting an impressive salmon and lake trout population that has made the Auburn reservoir a destination for many an angler. IFW fisheries biologists keep a close eye on Lake Auburn, and periodically sample a portion of the adult salmon population to monitor their health. In order to do that, biologists use portable electrofishing gear to gather fish that they can weigh and measure. Biologists recently surveyed salmon in a small tributary of Lake Auburn. “This is an annual monitoring program which we use to assess salmon growth and survival,” says IFW fisheries biologist Francis Brautigam. IFW biologists then take the information collected, compare it years past, and consider whether any changes are needed in the number of salmon stocked, or if regulations need to be changed. [caption id="attachment_1092" align="alignleft" width="354"] 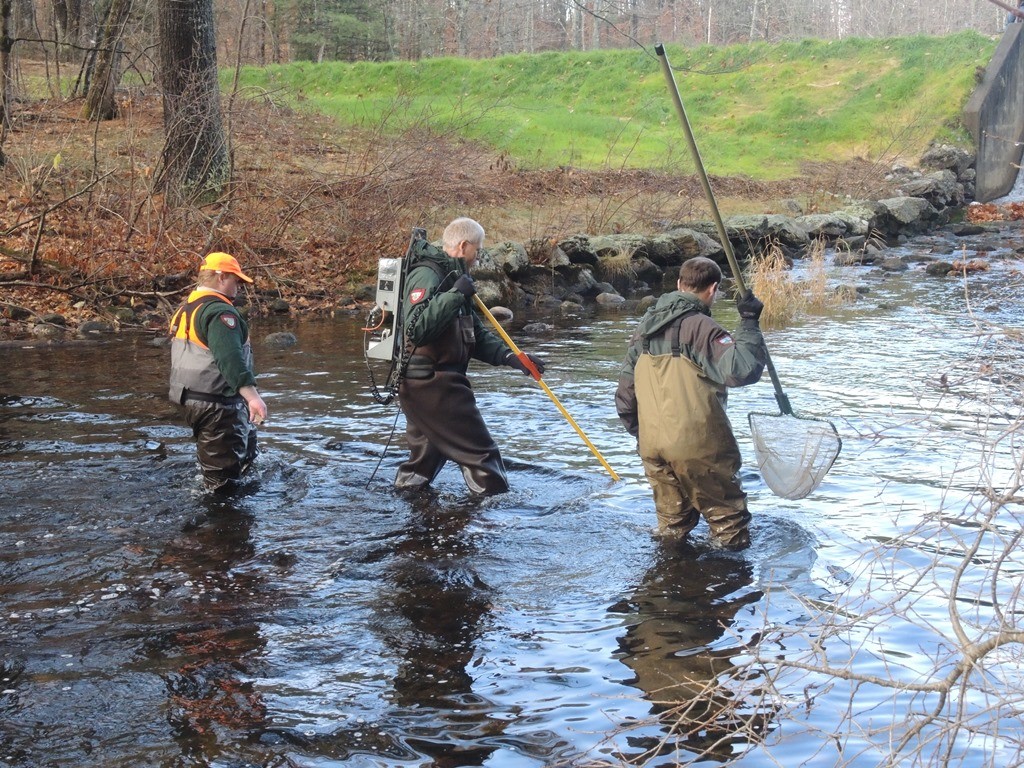 Biologists traverse the stream with an electrofishing backpack to collect landlocked salmon in order to assess the health of the salmon population.[/caption] Salmon migrate to spawn this time of year, and that behavior means that biologists can find a relatively large number of fish in a smaller area, as opposed to spread out all over the entire lake. In this case, biologists will section off a section of the stream so fish cannot escape. They then will methodically walk up the stream, “pulsing” the electrofishing wand with electricity to momentarily stun the fish so they can be scooped up. Once collected, the fish are anesthetized, measured and weighed, then released back into the stream. [caption id="attachment_1094" align="alignright" width="414"] 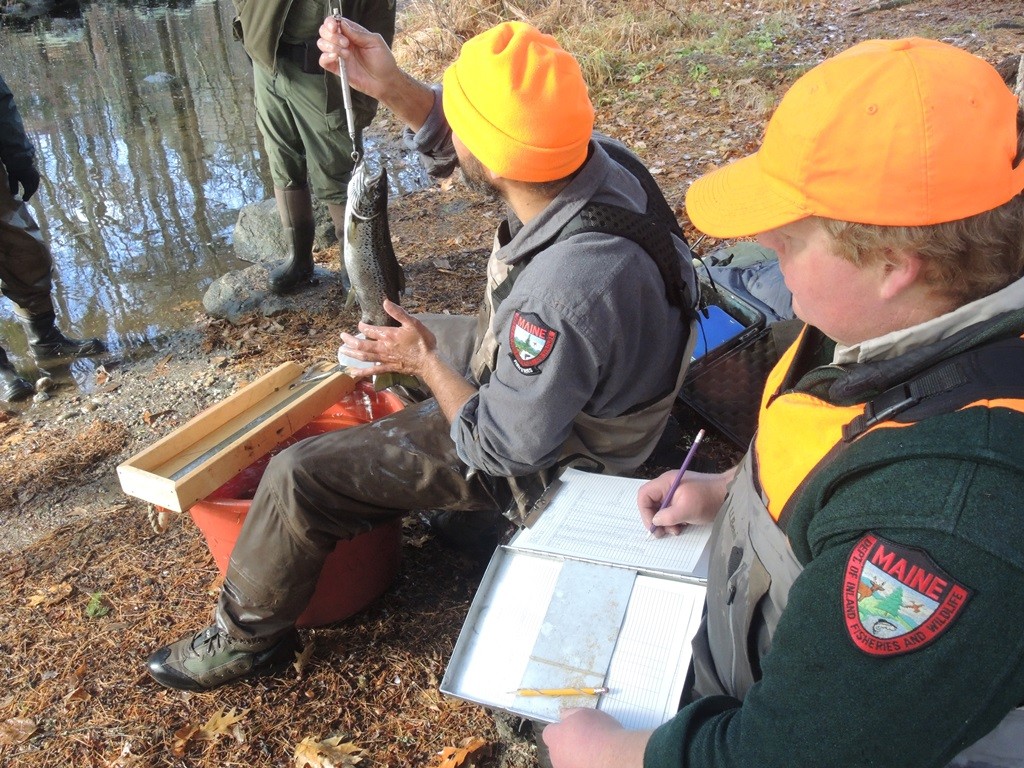 Each salmon that is collected is weighed and measured, with the information recorded in order to analyze later.[/caption] Keeping a watchful eye on how the salmon are doing is important since the fishery is so popular and fish populations can be variable from year to year. “Lake Auburn has traditionally been a togue fishery, but over the last 8-10 years we have worked to enhance the salmon fishery,” said Brautigam. “As we made that transition, we started to see an increase in interest in fishing, especially salmon fishing in Lake Auburn.” There was some concern a few years ago that the salmon fishery would take a hit after an summer algae bloom created low oxygen conditions in the deeper water. A number of lake trout were killed. [caption id="attachment_1096" align="alignleft" width="460"] 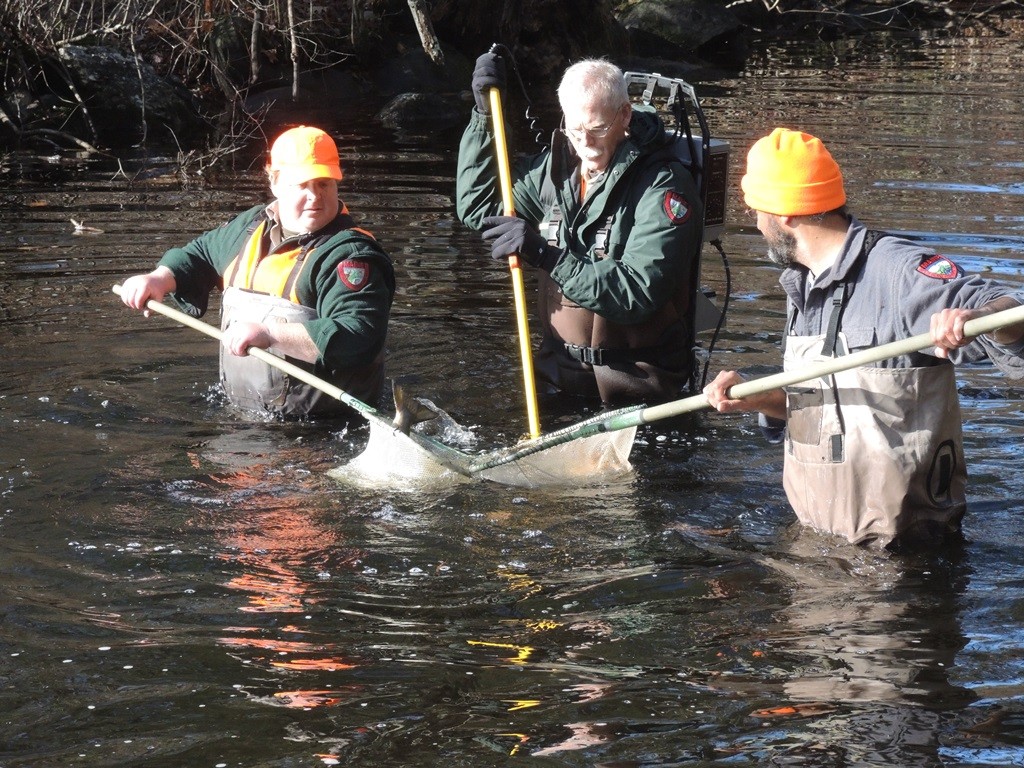 Fish are stunned momentarily by the electrical current and scooped up in nets. Note the size of the tail in the net. Each year there are multiple salmon in excess of four pounds and some larger than five pounds.[/caption] “That year there was an early ice out, we had a lot of rain early in the season which brought in a pulse of nutrients,” said Brautigam, who said the long summer season created ideal growing conditions for the bloom. The algae bloom impacted togue, but “the salmon seemed to come through fine.” This year, biologists captured, measured and weighed over 50 salmon, ranging in age from 2 to over 5 years. Last year, there were salmon from six different age classes. Average length was 19.8 inches with the average weight at 2.98 pounds. Over 20% of the salmon sampled were over 4 pounds, and the largest salmon was 5.7 pounds. It will take a little time to crunch  the numbers this year, but as you can tell by the pictures, the Lake Auburn salmon fishery continues to produce. [caption id="attachment_1095" align="alignleft" width="1024"] 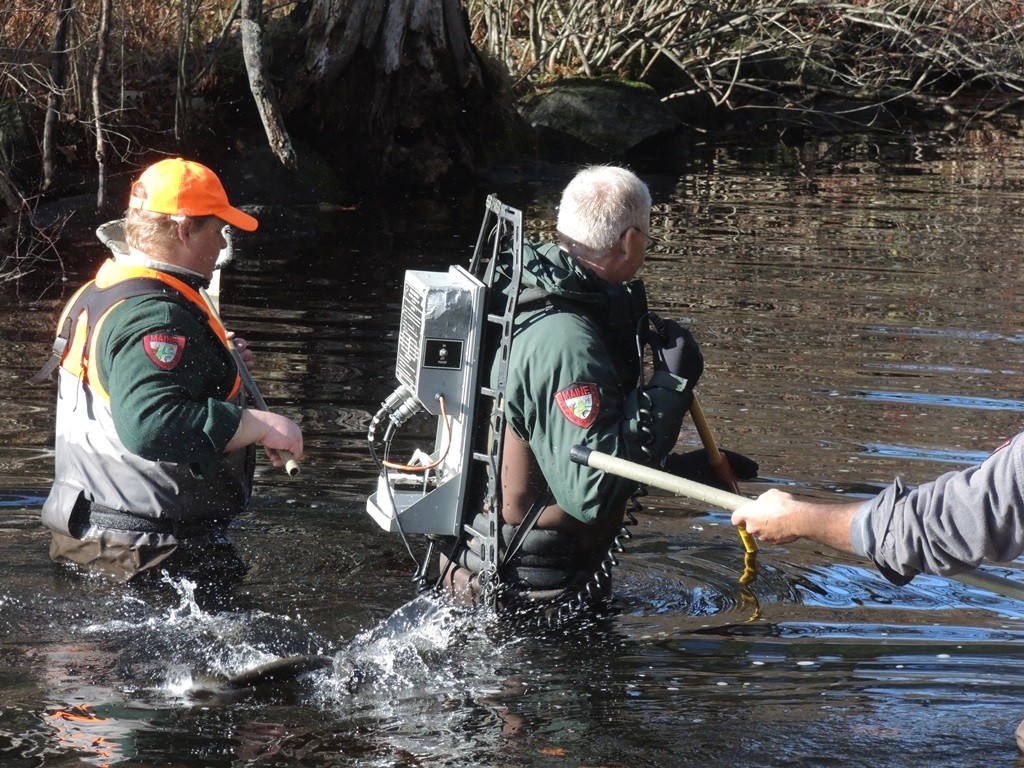 One that got away -- a landlocked salmon surfaces behind the biologists.[/caption]
Categories