By Regional Wildlife Biologist Brad Zitske The Kennebunk Plains Wildlife Management Area (WMA) is an exceptional 1758-acre property located in the town of Kennebunk. It is composed of 650 acres of sand plain – grassland community, representing the largest contiguous unit of this type in southern Maine. The remainder of the property is upland forest with black, white, and red oak, red maple, white and red pine, and some ecologically rare pitch pine – scrub oak barren. Kennebunk Plains WMA is recognized for the large number of state-listed rare, threatened, and endangered flora and fauna co-occurring at the same location, an anomaly in southern Maine where land is highly vulnerable to development. Species such as the state endangered grasshopper sparrow, black racer, and Edward’s hairstreak, as well as state threatened upland sandpiper, northern blazing star, and sleepy duskywing coexist with other uncommon species that are dependent on the unique blend of open expanses and pitch pine – scrub oak woodland. [caption id="attachment_827" align="aligncenter" width="300"]

Prescribed burn. Photo by Scott Lindsay[/caption] Kennebunk Plains was a commercial blueberry operation from the 1940s to 1989. Grasshopper sparrows were identified in 1984 and thus became the flagship species for management of Kennebunk Plains WMA upon state acquisition in 1990. Through tremendous efforts by the Nature Conservancy (TNC) and other partner organizations, the first purchase of 1041 acres was made thanks in large part to the Land for Maine’s Future Fund. Over the past decades, more land has been acquired as mitigation for habitat loss of black racers. [caption id="attachment_828" align="aligncenter" width="300"] 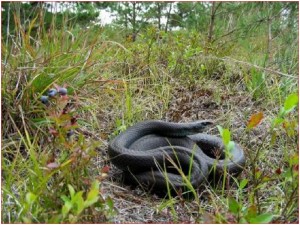 Black Racer. Photo by Jonathan Mayes[/caption] Management at Kennebunk Plains is considerably different than at other MDIFW WMAs with intensive prescribed burns being the most common tool used to retain a rotation of varying aged grasslands for grasshopper sparrows and other dependent species. TNC owns the adjacent 120-acre Wells Barrens and maintains a lease allowing for the management at Kennebunk Plains through mowing, fire, and manual cutting. Burns have been conducted annually from 1993 to the present via a mutual agreement between TNC and MDIFW, perpetuating the grassland portion of Kennebunk Plains WMA. Small timber management efforts began in 2002 to include scrub and brush enhancement for black racers and New England cottontails and MDIFW has future plans for larger cuts to convert some of the surrounding upland habitat to grassland. Currently, the largest concentrated populations of black racers and grasshopper sparrows in the state are located at Kennebunk Plains WMA. [caption id="attachment_829" align="aligncenter" width="226"] 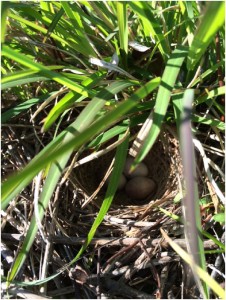 Field Sparrow nest. Photo by Brad Zitske[/caption] Access to Kennebunk Plains WMA is easy with two small parking areas located directly off of Route 99, just a short 10-minute drive from the Maine Turnpike in Kennebunk. There is also a small parking area off of the Maguire Road at the southern portion of the unit. Trails and dirt roads are numerous from all access points and are popular with dog walkers (on leash, of course), birders, and those simply wanting to enjoy this special place. Since management at Kennebunk Plains is focused primarily on grassland birds and black racers, vehicular access and public use is regulated from June to August. As expected from the diversity of rare species, nature lovers abound here in the spring and summer hoping to observe upland sandpipers, brown thrashers, prairie warblers, eastern meadowlarks, and vesper, field, and grasshopper sparrows, or to perhaps luck out and catch a fleeting glimpse of a black racer zipping through the brush. Come August 1st, blueberry pickers amass in numbers to fill their buckets of Maine’s signature fruit. Whatever one’s preferred activity, Kennebunk Plains WMA is undoubtedly a jewel of MDIFW wildlife management areas for its sheer inimitability.
Categories