As we progress in training, we have begun to introduce new search techniques to the dogs. This past week we introduced the concept of an air scent search or “hasty” search. Unlike tracking, air scent searches are done off lead and are used to search large areas or if the last known point of the missing person isn’t exact.

Before I was on the K9 Team, I was talking to a State Police K9 Handler about dogs that are multipurpose. This means they have multiple disciplines, such as tracking, evidence, cadaver and air scent searches. Single purpose dogs only specialize in detecting the odor in one discipline such as human remains or narcotics. I asked the handler how this affected the dog. She replied with: “If you were a doctor, lawyer, carpenter, and teacher, you would probably be a little overwhelmed.” With that in mind, it is extremely important that the dogs have a solid understanding in previous aspects of training before we introduce anything new. Over the past several weeks we have built a strong foundation in tracking and obedience. After assessing where the dogs were in training it was determined it was time to introduce air scent searches to the dogs. 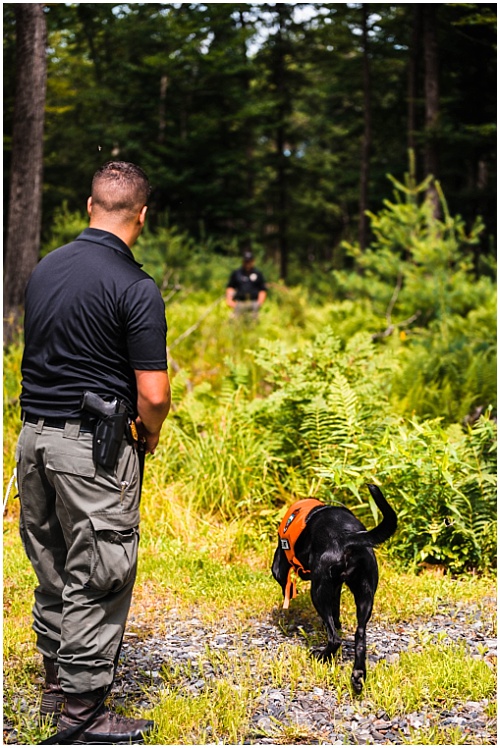 The training concept for air scent searches is easier said than done. We start with a “missing person” standing within eyeshot of the dog (see photo above). We then give the dog the search command and when they get to the missing person, we reward them. Over time, the “missing person” increases the distance between them and the dog. Eventually, the dog will begin to use their nose instead of their eyes to locate the missing person. Of course, this does not happen overnight. It takes thousands of repetitions. We also teach the dog to bark when they get to the person. This serves as an alert to the handler that the dog has found someone and the location of that person. K9s also wear a GPS collar so the exact location is known.

When I introduced this concept to Luna, she was confused to say the least. Over the past several months she has been taught to rely on me for various things and she was hesitant to leave my side at first. Once she realized it was not only acceptable to go to the “missing person,” but encouraged she quickly caught on.

As we move forward in training, we will continue to work on tracking and air scent searches. We will also introduce evidence searches to the dog.