The last couple of weeks Gordon and I have been fine tuning our tracking skills and have moved into more advance tracking.  We started with tracking on pavement then transitioned to tracking onto grass.  It was interesting to watch his first track that went from pavement to grass.  Gordon started on the track on pavement and was tracking perfectly.  When he reached the transition from pavement to grass it blew his mind.  It was something brand new to him and he went back and forth on the pavement trying to find the odor he was used to.  When the track hit the grass, it created a whole different wall of scent that he had to work harder to find the human scent.  Gordon worked through that first track with a little bit of help and now that we have been tracking in grass for a couple of weeks, he can make those transitions well.  We have covered numerous types of terrain including pavement, grass, woods, gravel, and even bridges, which reflects more of a real-life scenario. A missing person could be anywhere, so the K9s must be ready to track on just about any surface.

When we started tracking training, we left tracks with our bare feet. Now Gordon is tracking people who were wearing boots, which leave less human scent for Gordon to follow. We are still placing washers on the ground along the track, but there is a longer distance between the washers.  We made the transition from me knowing where the track was laid to tracks being completely unknown.  I will be given a scenario and must decide where to get Gordon out of the truck and from there find the start of the track.  This is more training for me than it is Gordon, because I never knew where the track went. I had to rely on reading K9 Gordon to determine if he was tracking or not. My first unknown track was an eye-opener.  We made it to the end of the track, but we didn’t stay on the footprint of the track the entire time.  The unknown tracks are teaching me to watch Gordon carefully and to evaluate every aspect of the track.  I have picked up some of Gordons behaviors that tells me if he is on track or not.  As handlers we have to consider the environmental factors such as wind direction and elevation to know where the scent is going to pool and settle.  Other considerations I have learned to interpret are the amount of contamination (for example, if another person or a vehicle has gone over the track), how old the track is, along with other weather conditions.  An example of one of our latest tracks was over a half-mile long starting 40 minutes after the track was laid.  The track started on a gravel road following to a road intersection, into some tall grass leading into the woods.  From the woods we hit a powerline for a several hundred yards then took a 90 degree turn back into the woods.  From the woods back out onto some mowed grass, following a fence line and then the track ended at a school parking lot. To put this into perspective on how far we have come, just a few weeks ago Gordon was tracking on a very small piece of pavement, the track was left with bare feet, and we started tracking just a few minutes after the track was laid. We are now tracking.

Gordon is doing well, and I am doing the best I can to keep up with him and follow his nose.  Some examples of some of the amazing work Gordon is capable of has shown this week.  Someone not knowing we were doing a training track parked directly on top of a washer that was placed in the middle of a paved road.  Gordon was tracking well as we approached the parked pickup truck.  Gordon went up to the truck staying on the drivers sided and crawled under the truck and laid there.  When I got down on my hand and knees, I could see Gordon under the perfect center of the truck with a washer between his front legs.  I rewarded him and hoped to get clear of the stranger’s truck.  So, I quickly started to walk away hoping Gordon would get back to tracking on the other side of the truck.  Nope, under the truck again, laying down on the washer.  So, I crawled under this stranger’s truck and grab the washer so we could finish the track. This shows just how clear the training concepts have been to Gordon and how precisely he can track a human.  We will continue to challenge Gordon and myself with longer, and older tracks.  So far, the journey has been challenging and rewarding for us both. 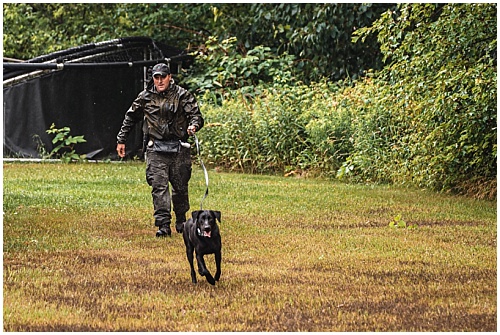