There was once a time when the state of Maine lost its wild turkey population. In the 1800s before hunting was regulated, turkeys were hunted to extirpation and the future of wild turkeys looked grim for some time. Beginning in the late 1970s, reintroduction efforts to our state began to take after decades of unsuccessful attempts. With their challenging comeback in both Maine and the United States, there are several reasons to be grateful for our currently healthy and widespread wild turkey population. 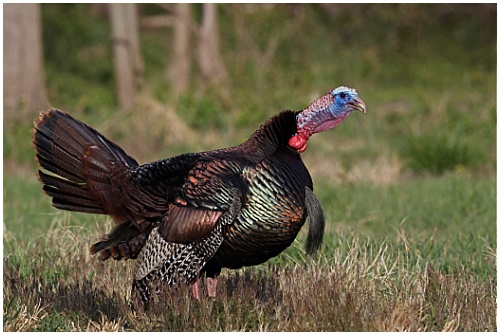 Unfortunately, turkeys are sometimes wrongly blamed for ticks and other concerns.

Ticks: Hosts of ticks can span from deer and birds to small mammals, but turkeys often carry the stigma of tick spreaders. Ticks and Lyme disease existed long before the reintroduction of turkeys, and studies have shown they do not contribute to the tick problem, in fact they preen themselves, one another, and their immediate environment of ticks.

Coexistence: It’s always important to remember that turkeys occupy the same habitat as dozens of other wildlife species, each one searching for food, space, and mates. Numerous studies conducted, such as a University of Minnesota study, suggest that grouse and turkey have successfully coexisted for decades where ranges overlap, but preferences in habitat exist between the two species.

Thanksgiving is a better time than ever to consider and recognize the positive impacts that wild turkeys have socially, environmentally, and economically. Turkeys provide wildlife lovers an easy and safe opportunity for viewing wildlife, and they are a treasured game bird by hunters. The economic value for spring turkey hunting season in 2003 was estimated at $4.4 billion nationwide, according to a study by Southwick Associates. In addition to their social and economic value, turkeys exist as both predator and prey during their lifecycle, enhancing the biodiversity of ecosystems wherever they inhabit. As poults (young turkeys), turkeys consume various bugs and pests, and are prey for a variety of wildlife. The rich protein and fat of turkey eggs in the spring, when other food sources are not yet available, provide a vital food option to numerous wildlife species throughout the state.

As you prepare to feast on a Thanksgiving meal this month, remember that Thanksgiving turkey was once enjoyed as an all-natural, wild-fed, free-roaming meal of choice for this national holiday. Take a moment to appreciate the national and state recovery of wild turkeys and the many benefits they provide.