A Day of Trap Netting on Rangeley Lake 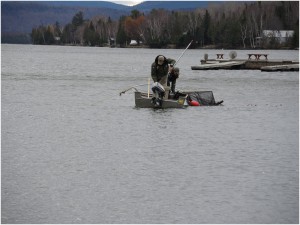 Collecting fish from the trap nets[/caption] Monday, October 30th was not a day for the faint of heart in Oquossoc, Maine. I joined Liz Thorndike and Bob VanRiper, biologists out of our Strong office for a little trap netting on Rangeley Lake. It was a typical fall day, spitting snow, high winds and cool temps, but, I did get to see the biologists in action. The trap nets were set out far enough that it required a boat to reach them, so off we went. With lots of fish in the nets, Liz and Bob worked quickly to get them out and into a big barrel full of water.  After bringing the fish into shore, they put an anesthetic in a tub of water. Liz or Bob would then scoop a net full of fish and put them into this tub. By anesthetizing the fish, it allows for quick handling and less stress on the fish as they gathered their data. Liz began by putting one of the salmon on her board for measurement, then weighed, marked and returned it to the water, all in about 30 seconds. [caption id="attachment_1062" align="alignleft" width="300"] 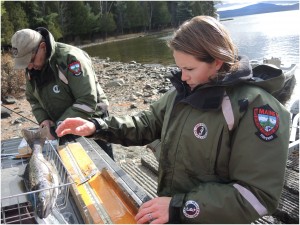 Bob and Liz worked quickly to gather data from the fish[/caption] Not only did they record weight and length of fish, they also took note of injuries from hooks. When asked, they explained that depending on the severity of the injury, it can impact the growth of the fish. Minor injuries from hooks usually have no long term effects, however, many injuries prevent fish from foraging at their normal levels and this can have a significant impact on overall growth of a fish. If the fish was a wild salmon, they would take a scale sample. A scale can tell us current age, number of years spent in a stream before dropping into the lake, number of times the fish have spawned and at what ages the fish spawned.  Also, injuries from hooks, if severe enough can be observed while interpreting the scales. I asked questions of course and got some good answers, like, why trap net?  Liz said the trap netting of Rangeley Lake is important because the Department is currently supplementing the population with hatchery fish and there is a delicate balance between the number of salmon and the food source. Trap netting gives us the opportunity to look at a large percentage of the spawning salmon population and monitor wild cohorts along with returning hatchery age classes. I also asked what the overall result of this sampling might be, and Liz said that they adjust stocking rates annually based upon the data gathered during trap netting. If the data shows a high percentage of wild fish or poor condition factors due to a low forage base we would decrease or cease stocking. There were some nice fish gathered, and I for one, wondered where they were when I was fly fishing that area in late September! 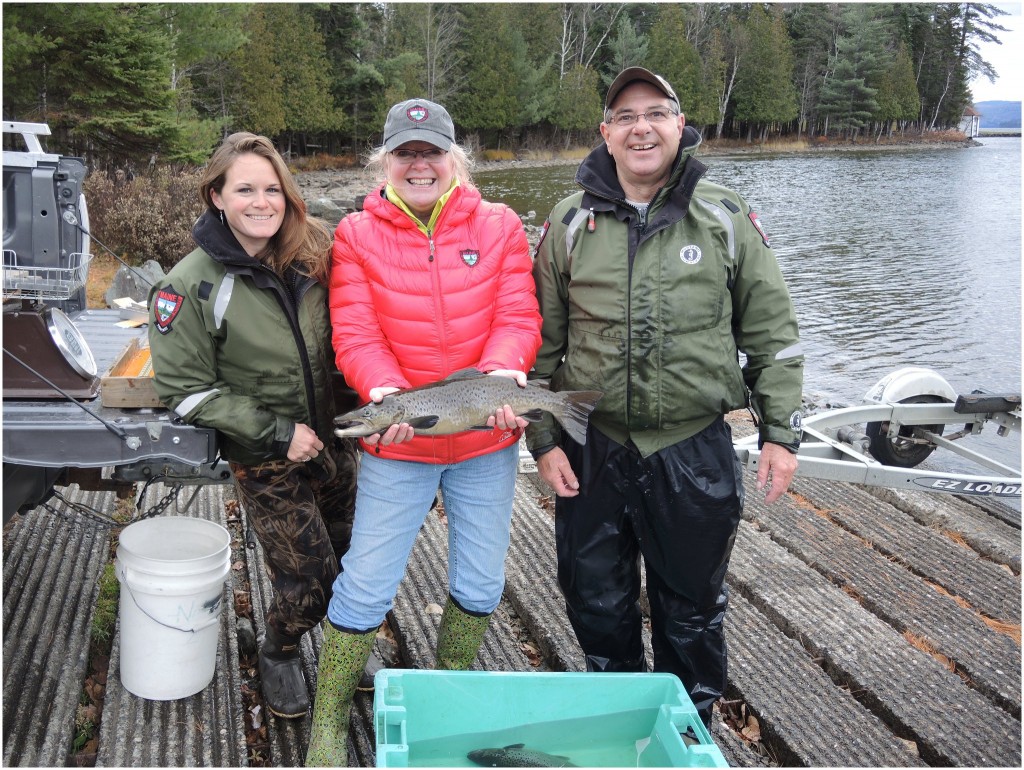