By now, you might have heard a bit about some "changes" to the legal hunting hours for Moose in Maine.  Recently, the Department discovered a long-standing error in the Maine Moose Hunter's Guide.  Below is a statement from the Commissioner's office explaining the rest of the story... 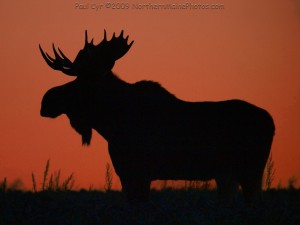 From Deputy Commissioner Andrea Erskine: An effort to correct a mistake in the moose hunter’s guide has caused concern that the Department of Inland Fisheries and Wildlife is trying to deprive moose hunters out of a ½ hour of hunting. When the state reinstituted the moose hunt in 1980 it was a one week hunt and the legal hunting hours for moose were set as ½ hour before sunrise until sunset. The sunset rule was due to safety, target identification and practicality reasons. The rule helped decrease the number of double moose kills and the number of shot moose that were lost tracking, as well as limit the number of hunters who were trying to butcher and drag a moose out in the dark. These hunting hours remained the same until the moose hunt was expanded into southern and central Maine. The expansion included an additional week in October, and then a November moose season. The November season was set to run concurrent with the deer season and for the first time, moose hunters were allowed to hunt the same hours as deer hunters – ½ hour after sunset, but only for the November season. Somewhere along the way, our moose hunters guide booklet was mistakenly changed to read that ALL moose hunters could hunt until ½ hour after sunset even though the rule did not change. This year, the mistake was found in the moose hunters guide and corrected to reflect the actual rule, and this has some longtime moose hunters claiming they’ve hunted moose one half hour after sunset all their life and prefer it that way. The law that establishes hunting times for most other species does allow hunting until ½ hour after sunset.  The sunset rule was established through the rulemaking process under the authority given by the Legislature. Given this conflict, the Department will enforce the statute (1/2 hour after sunset) rather than the rule (sunset) for this year. A public working group will be reviewing all aspects of the management of all our big game species, including moose, and will also be tasked with resolving the conflict between the law regarding night hunting and the rule. As always, there is a public component to this and if you have concerns about legal hours for moose hunting, that is the venue to have your voice heard.  Keep in mind that the rule was established at a time when daylight savings occurred earlier and there was only one week of moose hunting. The department may still have our concerns for hunter safety, lost game, and multiple kills, but, as always, want to hear the opinions of hunters and guides as to why the moose hunting day should be expanded. Until then, we hope that moose hunters will enjoy the extra half hour allotted in statute, and we wish all moose hunters a safe and successful hunt.
Categories